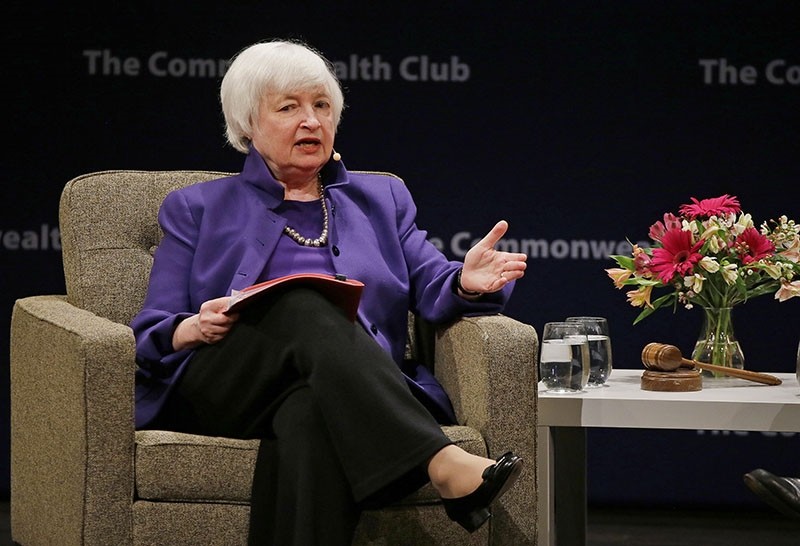 Federal Reserve Board Chair Janet Yellen answers questions during a meeting of the Commonwealth Club Wednesday, Jan. 18, 2017, in San Francisco. (AP Photo)
by Compiled from Wire Services Jan 19, 2017 12:00 am

Federal Reserve Chair Janet Yellen says she expects the Fed to raise its benchmark interest rate several times a year through 2019, as it moves closer toward to its economic goals of maximum employment and stable inflation.

But in a speech in San Francisco Wednesday, she said she can't say when the next interest rate will occur or how high rates will rise. She says that will depend on how the economy performs in the coming months.

She said Fed officials, who boosted rates for a second time last month, expect to raise rates "a few times a year" until they have pushed the Fed's benchmark rate close to 3 percent by the end of 2019. The rate now stands in a range of 0.5 percent to 0.75 percent.

The 3 percent level for the Fed's target for the federal funds rate, the interest that banks charge each other, is the point that the Fed currently believes is the so-called neutral rate — the level where the Fed's interest rate policies are not spurring growth or holding it back.

The Fed has raised its benchmark interest rate twice in the last 13 months, after holding an unprecedented near-zero level for seven years after the 2008 financial crisis.

The jobless rate in the United States of 4.7 per cent is near a nine-year low, with about 15.5 million new jobs in the last seven years.

Inflation has lagged below the Fed's goal for years, but consumer prices rose again in December for the fifth consecutive month, the US Bureau of Labor Statistics said Wednesday.

Prices last month rose by a seasonally adjusted 0.3 per cent. For the last 12 months, the index was up 2.1 per cent.

The so-called core index, which excludes volatile food and energy prices, rose 0.2 per cent in December. The core inflation rate for the last 12 months was 2.2 per cent.

"Right now our foot is still pressing on the gas pedal, though, as I noted, we have eased back a bit," Yellen said. "Our foot remains on the pedal in part because we want to make sure the economic expansion remains strong enough to withstand an expected shock, given that we don't have much room to cut interest rates."

Currently, Yellen said inflation is still running below the Fed's 2 percent objective, by its preferred measure of prices, and that some measures show that even though unemployment is below 5 percent, there could still be room to make further progress on jobs.

"For instance, wage growth has only recently begun to pick up and remains fairly low," Yellen said.

She said as the economy gets closer to the Fed's goals on employment and inflation, it will make sense to "gradually reduce" the level of support the Fed is providing by raising interest rates.

"Waiting too long to begin moving toward the neutral rate could risk a nasty surprise down the road — either too much inflation, financial instability, or both," Yellen said in her speech to the Commonwealth Club of San Francisco.

During her appearance, Yellen made no mention of the incoming Trump administration. President-election Donald Trump was critical of Yellen during the campaign, accusing the Fed of being political and keeping interest rates low to help Democrats.

Yellen has denied this charge. She has said she intends to remain as Fed chair until her term ends in February 2018.

The U.S. Bureau of Economic Analysis, which is part of the Commerce Department, is to issue its first estimate of fourth-quarter 2016 gross domestic product on January 27. The final estimate of the July-September period put economic growth at annualized rate of 3.5 per cent, the fastest quarterly pace in two years.

The Fed's next statement on monetary policy is due February 1.