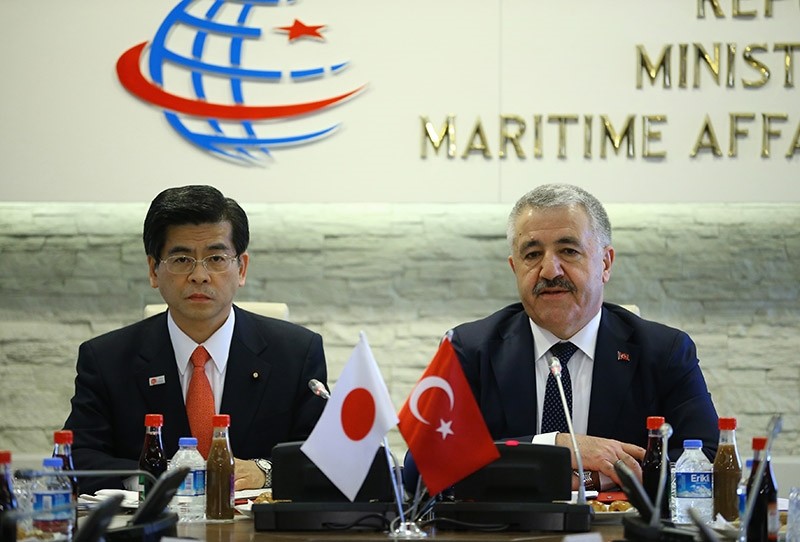 The Japanese government has begun official talks with Ankara officials for the Çanakkale 1915 Bridge, which is slated for service on the 100th anniversary of the founding of the Turkish Republic, through the build-operate-transfer model.

Japanese Minister of Land, Infrastructure, Transportation and Tourism Keiichi Ishii held talks for the Çanakkale 1915 Bridge in Ankara on Jan. 18, which included a meeting with Prime Minister Binali Yıldırım and President Recep Tayyip Erdoğan, in which the minister spoke with high-level officials and said: "We trust Turkey and the Turkish economy. For this reason, our companies are keen on building the Çanakkale 1915 Bridge, which is considered a very meaningful, momentous step for the Turkish people."

Japan's largest transport-related machinery production firm, Ishikawajima-Harima Heavy Industries Company, Ltd. (IHI Corp), which produces industrial machinery, such as ships, aircraft engines and suspension bridges, is interested in the Çanakkale 1915 Bridge project, which will be the world's longest suspension bridge with a main span of around 2,023 meters, even exceeding Japan's Akashi Kaikyo Bridge, which is an impressive 1,991 meters in length.

World giants in line for the project

Slated for completion by 2023, construction of the Çanakkale 1915 Bridge will mark the 100th anniversary of the founding of the Turkish Republic by Mustafa Kemal Atatürk. Accordingly, whichever consortium offers the shortest projected completion term under the build-operate-transfer model and transfers it to the government will be chosen for the construction phase of the project. Japan's IHI, Ltd. and Itochu, which previously worked with Turkey in the construction of other suspension bridges, has sought to team up with Turkish firms for the construction tender for the project. Japan will also compete with South Korean and Chinese companies.

So far, 24 companies - four from Japan, three from China, two from Korea and one from Italy - have acquired the necessary tender documents for the Çanakkale 1915 Dardanelles Bridge bid. The suspension bridge will be built between the Lapseki and Gelibolu districts of Çanakkale so as not to disturb archaeological sites in the region. The 45-kilometer-long highway, spanning a route from the district of Gelibolu to Malkara in Tekirdağ, will be constructed in the scope of the bridge's tender as well, and the road will later be connected to the Istanbul-İzmir Highway in the Savaştepe district of Balıkesir, exiting from Kınalı in the north.

The highway project, which includes the Çanakkale Strait Bridge, is another highway to connect Europe and Asia. Upon completion of the project, Balıkesir and Çanakkale will be connected via a highway, stretching from the Çanakkale Bridge to Tekirdağ before reaching the Kapıkule border gate. Completion of the highway will form a ring in the Marmara region, easing İstanbul's heavy traffic, lowering transportation costs and offering more convenient transportation routes from Çanakkale province to the Aegean region.