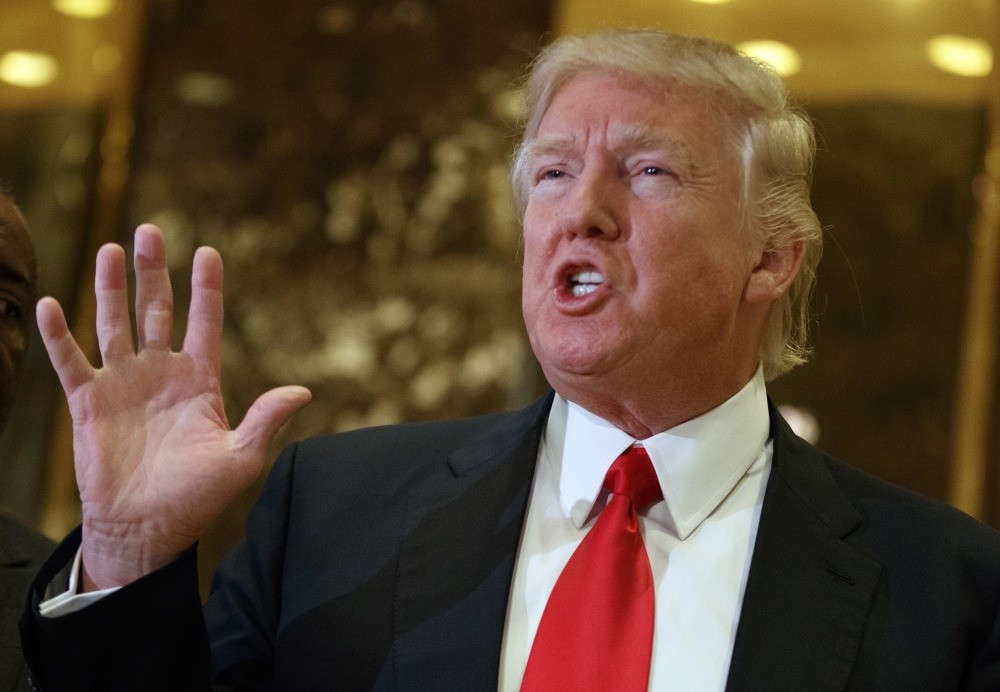 The U.S. President Donald Trump speaks with reporters in the lobby of Trump Tower in New York. Trump has offered views on U.S. relations with Asia that could indicate radical shifts in long-standing policy toward the region.
by Jan 23, 2017 12:00 am

The 12-nation Trans-Pacific Partnership, which the U.S. signed but has not ratified, was the main economic pillar of the Obama administration's ‘pivot' to the Asia-Pacific region in the face of a fast-rising China

The new U.S. administration of President Donald Trump said its trade strategy to protect American jobs would start with withdrawal from the 12-nation Trans-Pacific Partnership (TPP) trade pact. A White House statement issued soon after Trump's inauguration said the United States would also "crack down on those nations that violate trade agreements and harm American workers in the process."

The statement said Trump was committed to renegotiating another trade deal, the North American Free Trade Agreement (NAFTA), which was signed in 1994 by the United States, Canada and Mexico.

"For too long, Americans have been forced to accept trade deals that put the interests of insiders and the Washington elite over the hard-working men and women of this country," it said.

"As a result, blue-collar towns and cities have watched their factories close and good-paying jobs move overseas, while Americans face a mounting trade deficit and a devastated manufacturing base."

The statement said "tough and fair agreements" on trade could be used to grow the U.S. economy and return millions of jobs to America.

"This strategy starts by withdrawing from the Trans-Pacific Partnership and making certain that any new trade deals are in the interests of American workers."

If NAFTA partners refused to give American workers a fair deal in a renegotiated agreement, "the President will give notice of the United States' intent to withdraw from NAFTA," the statement added.

The TPP, which the United States signed but has not ratified, had been the main economic pillar of the Obama administration's "pivot" to the Asia-Pacific region in the face of a fast-rising China.

Proponents of the pact have expressed concerns that abandoning the project, which took years to negotiate, could further strengthen China's economic hand in the region at the expense of the United States. Australia's position that a change of heart remains possible in the U.S. and that the trade deal can proceed, is unchanged despite the White House statement, Damon Hunt spokesman for the Australian prime minister, told Reuters on Saturday.

Trump has criticized China's trade practices and threatened to impose punitive tariffs on Chinese imports. The Chinese government said on Thursday that China and the United States could resolve any trade disputes through talks, while a Chinese newspaper warned that U.S. business could be targets for retaliation in any trade war ushered in by Trump. Trump has sparked worries in Japan and the rest of the Asia-Pacific with his opposition to the TPP and his campaign demands for allies to pay more for their security.