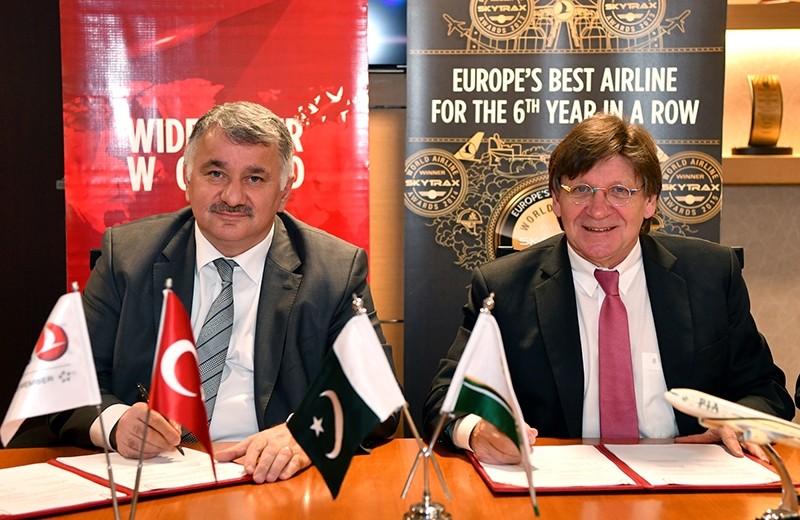 Turkish Airlines and Pakistan International Airlines have agreed to expand their codeshare cooperation, including new routes as of Feb. 1, Turkey's national flag carrier said in a statement on Wednesday.

A codeshare agreement is an arrangement by which two or more airlines can share the same flight. A seat can be purchased on one airline but is actually operated by a cooperating airline bearing a different flight number or code.

Turkish Airlines, on the other hand, will market Pakistan International Airlines flights from Karachi and Islamabad to Dubai, Abu Dhabi and Muscat and from Lahore to Dubai and Abu Dhabi with its own airline code and flight number, the statement said.

"The expanded codeshare cooperation provides passengers with more feasible connections as well as seamless travel opportunities between and beyond destinations of Turkey and Pakistan," it added.

Turkish Airlines CEO and Deputy Chairman Bilal Ekşi said the passengers would be able to travel with easier connections and more flexible alternatives.

"The more the frequencies between two countries are increased in the future, the further the cooperation between two carriers will be expanded so as to enable passengers to travel with even shorter connection times and more comfortable travel opportunities," he said.

Pakistan International Airlines CEO, Bernd Hildenbrand, for his part, said the codeshare expansion would "add more value to our commercial ties and be equally beneficial for our customers."

"We will continue to explore more commercial avenues in the future as well," he added.