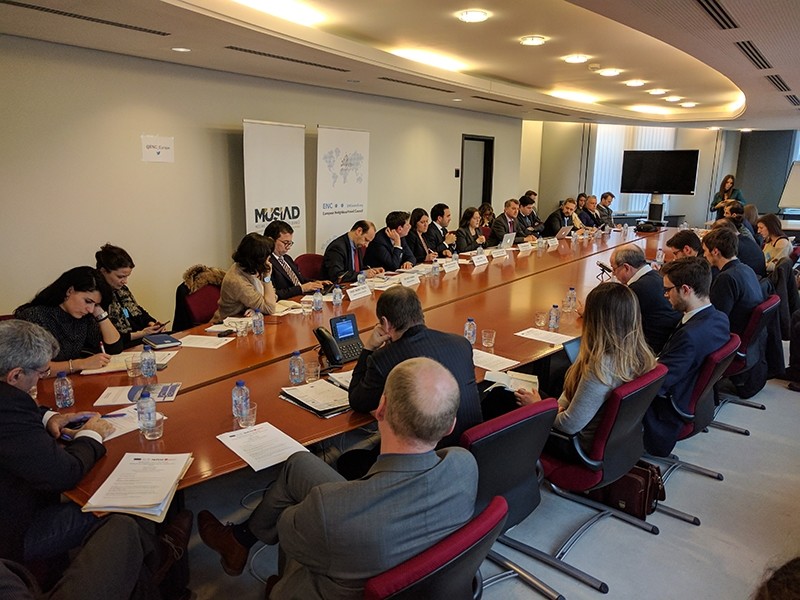 by Mehmet Solmaz Jan 26, 2017 12:00 am
Reform of the Customs Union between Turkey and the EU gained momentum when the European Commission asked the Council for a mandate to launch talks with Turkey to modernize the existing 20-year-old agreement.

A round table discussion, "Setting the EU-Turkey economic agenda: customs union reform," was held yesterday in the European Parliament. The event was co-organized by the European Neighborhood Council (ENC), Independent Industrialists and Businessmen's Association (MÜSİAD) and the EP's Turkey Rapporteur Kati Piri.

During the opening remarks, ENC director Samuel Doveri Vesterbye, asserted that updating the Customs Union is widely acclaimed as the most important realistic trade deal of the upcoming years.

MÜSİAD's Brussels Representative Alperen Özdemir drew attention to the economic bonds between Ankara and the EU, saying Turkey is the sixth largest trading partner of the bloc and at the same time the EU is Turkey's largest trading partner. The foreign trade volume between Turkey and the EU was approximately $140 billion last year. Half of Turkey's $150 billion exports are made with the EU, while 70 percent of the 17,000 foreign companies in Turkey are European.

According to Özdemir, the implementation of a reformed and modernized Customs Union will expand into agriculture, services and public procurement, making it possible to easily double the trade volume between the two partners in the next decade from about $150 billion to $300 billion. Touching upon the diplomatic sides of the reform process, Özdemir said that when the negotiations officially start, MÜSİAD would continue to share their views by presenting the expectations and concerns of their 50,000 member companies to the decision-makers. He added that with the updated agreement, Turkey would be part of all free trade agreements signed between the EU and third countries.

Professor Murat Yülek, an economist from Istanbul Commerce University, stressed that although Turkey has a long-lasting desire to be part of the EU, the bloc's attitude weakened this desire. Analyzing the perception of the Turkish public, Yülek said the EU's failure to grasp the deep understanding of Turkish society and politics resulted in a majority of people seeing a union that applied double standards. He then gave several examples, including the bloc's tolerance of the PKK terror organization, the silence of the EU on the Gülenist Terror Group (FETÖ), the hassle that Turkish citizens go through obtaining visas to travel to EU counties and also that large European companies in Turkey have breached competition laws and gained market share. Yülek said, on the other hand, Turkish companies do not have the means or face huge barriers to enter European markets.

The EC has officially been authorized to update the Customs Union agreement with Turkey. EU member states transferred the authority to negotiate to the EC to expand the scope of the agreement with Turkey, which was signed in 1995. Frans Timmermans, the first vice president of the EC, will announce details of the new agreement to be negotiated. The amendment will pave the way for Turkey to export agricultural, dairy and industrial products to the EU without customs restrictions. During a meeting in Brussels on Oct. 5, 2015, President Recep Tayyip Erdoğan demanded the expansion of the Customs Union agreement in response to the agreement on the refugee issue.
Last Update: Jan 26, 2017 5:39 pm
RELATED TOPICS