“Made in Palestine”: Turkish business to invest in Jenin 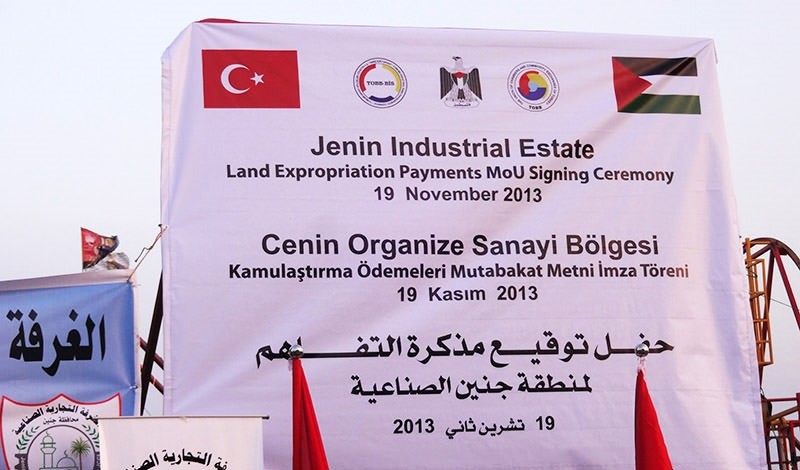 Thanks to an updated free trade agreement with Israel, Turkish businessmen will be able to invest in factories in the Palestinian city of Jenin, offering employment opportunities in the region. The manufactured goods will be labeled "Made in Palestine," in a historic moment for the two countries.

Jenin, located in the West Bank, has been home to the Turkish-sponsored Organized Industrial Free Zone (OSBB) since 2015. The TOBB for Peace Industry Project (TOBB-BİS A.Ş), which belongs to the Union of Chambers and Commodity Exchanges of Turkey, is slated to open investments in the zone and continue until the end of 2017.

The Jenin OSSB will be the first pillar in a project to create Turkish-based regional value chains. There are currently efforts underway to find qualified personnel to work in the region.

According to the Star newspaper, the Turkish Cooperation and Coordination Agency (TİKA) plans to build a vocational school to train employees to work in the free zone. Jenin OSSB aims to employ 10,000 to 15,000 people both directly and indirectly. This would be significant for Jenin, a region with 320,000 people and an unemployment rate of 28 percent.

Products produced in the industrial free zone will be available to world markets via Haifa Port under Israel's special transit and roaming rules. Some sector representatives have pointed out that companies located in Anatolia could move their existing facilities to Jenin in order to enter the U.S. market with ease. Products sold with the "Made in Palestine" brand are expected to attract great interest from consumers, especially in the Islamic world.

Factories in the industrial free zone have significant investment potential in textile and agricultural industries. Countries from Central Asia and the Middle East are also running to the TOBB's door to benefit from Turkey's industrial zone business infrastructures.