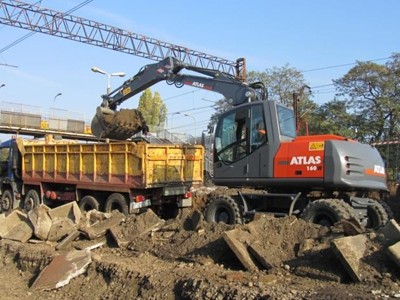 Speaking to Anadolu Agency (AA), Stitou elaborated on ATLAS' investments plans for Van as part of the Centers of Attraction Program.

Pointing out that Turkey is an important country in the region, Stitou said ATLAS is a century-old history and the company believes that both Turkey and the region's economy will gain further strength. He said ATLAS wants to benefit from the young population in Van to manufacture heavy equipment for export. In accordance with the plan, the company has also made an investment decision.

The company plans to hire 200 people initially, Stitou said and added that they expected to receive the necessary support in regards to human resource, logistics and other incentives.

He said ATLAS would transfer its expertise in heavy equipment manufacturing to the region and organize training in the sector.

Commenting on the investment decision, Van Organized Industrial Zone Board Chair Şemsettin Bozkurt underlined its importance for Van and said that they had had a meeting with the executives of the company.

Bozkurt described Van as the most attractive destination for regional trade and reaffirmed that Stitou said that young people employed by the company would participate in training in Germany. They will learn about German work discipline and technology, which in return will contribute remarkably to the regional economy, he hoped.

He underscored that the Van Organized Industrial Zone was ready to provide support for ATLAS in regards to the company's investment and added that the company will benefit from free land allocation with full infrastructure and all other relevant facilities at the maximum level.

The investment incentive program, "Centers of Attraction," which offers hassle-free investment zones in 23 eastern provinces has already attracted both Turkish and foreign investors for industrial projects, with organizations from Iran, Germany and France among potential investors.

Prior to ATLAS's investment plans in Van, German chemical giant BASF and a famous food brand were reported to have launched similar investment projects in Diyarbakır to increase production in Turkey.

Companies seeking to invest in Diyarbakır include German plastic producer Werde and chemical company Wilco, as well as Iran's largest lumber company, Aida, along with the Sahan Group. While Aida seeks to establish a huge, medium-density fiberboard (MDF) factory in Diyarbakır, the Kaptanoğlu Plastics Company, which has international investments, plans to invest in Van where organized industrial zone authorities said they were expecting at least 10 new investment projects from Iranian companies by the end of the year.

France-based TelePerformance is another company planning to make employment-oriented investments. TelePerformance Turkey CEO Engin Utkan said the Centers of Attraction offered significant opportunities for new investment and added that the company will be moving investments to these organized industrial zones.
Last Update: Feb 23, 2017 1:10 am
RELATED TOPICS