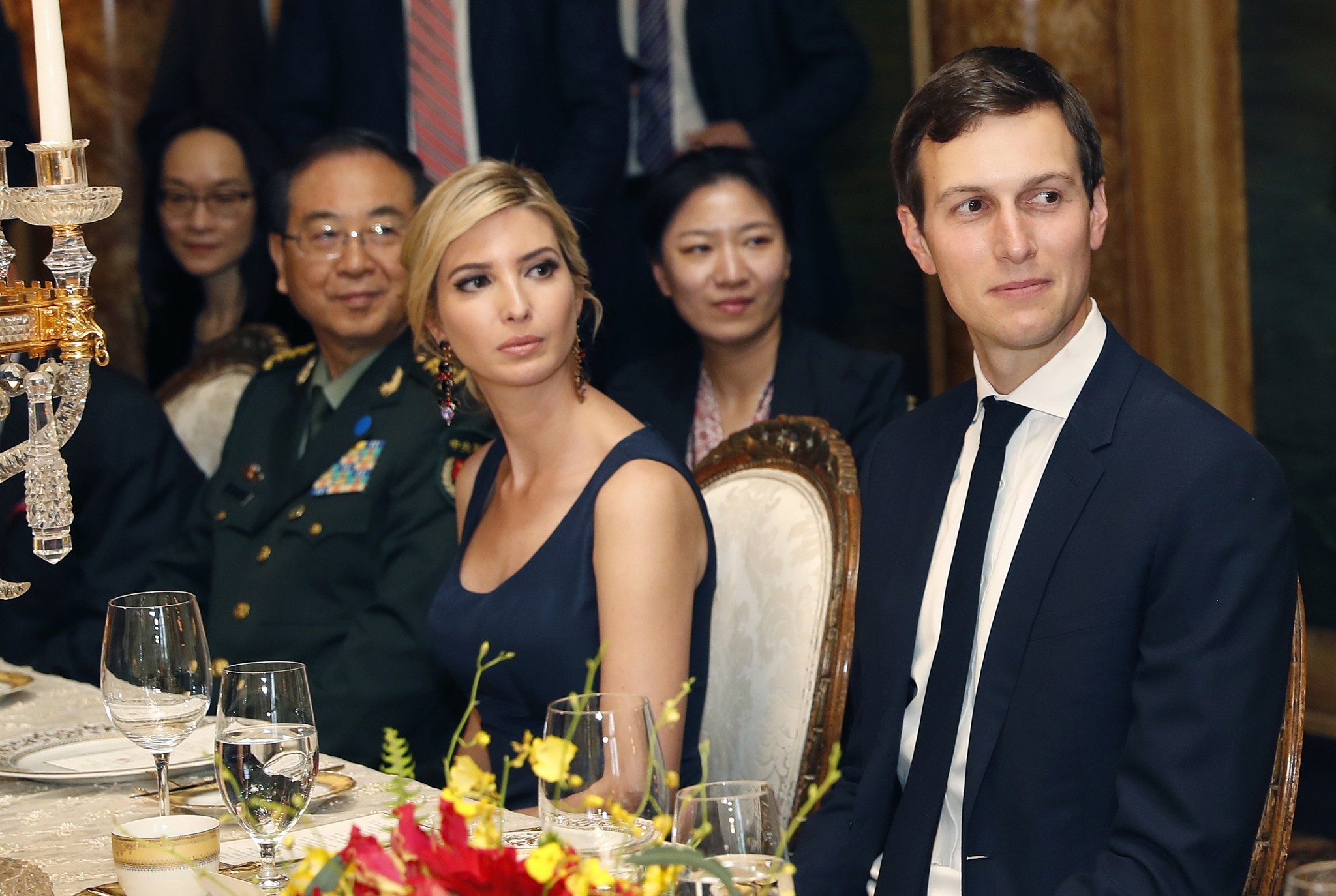 After gaining provisional approval for at least five marks since U.S. President Donald Trump's January inauguration, Ivanka Trump seems to be speeding up her efforts to protect her first name. Some are interpreting the move as a way for her to emerge from her father's shadow, but some believe Ivanka's efforts are not as innocent as they seem. Especially after three of her trademark requests coincided with Chinese President Xi Jinping's visit to Mar-a-Lago, people think her business is pushing the White House into unprecedented ethical territory.

The whole debate started on April 6, when Ivanka and her husband Jared Kushner sat next to the president of China and his wife for a steak and Dover sole dinner at the Mar-a-Lago resort in Florida.

The fact that on the same day, Ivanka's company was given monopoly rights to sell Ivanka brand jewelry, bags and spa services in the world's second-largest economy raised many eyebrows, with many seeing it as a way of trying to curry favour with world leaders to help promote and expand her brand.

The scenario shows how difficult it is for the president's daughter, to separate business from politics in her new position at the White House.

A spokesperson for the Ivanka Trump brand on Tuesday spoke out on the issue, saying that all 2017 Chinese trademarks were defensive, filed to prevent counterfeiters or squatters from using her name.

To address these ethical concerns, Ivanka Trump even shifted the brand's assets to a family-run trust valued at more than $50 million and pledged to recuse herself from issues that present conflicts. She is also no longer running her design business and has given day-to-day responsibility to Abigail Klem, president of the brand. Meanwhile, her husband has taken steps to distance himself from his sprawling New York real estate business, divesting some of his business interests including his stake in a major Fifth Avenue skyscraper.

Despite this, the Chinese aspect of Ivanka's contacts still remains a nagging concern.

"Ivanka has so many China ties and conflicts, yet she and Jared appear deeply involved in China contacts and policy. I would never have allowed it," said Norman Eisen, who served as chief White House ethics lawyer under President Barack Obama. "For their own sake, and the country's, Ivanka and Jared should consider stepping away from China matters."

Instead, the first daughter and her husband have emerged as prominent interlocutors with China, where they have both had significant business ties. Last year, Kushner pursued hundreds of millions of dollars in real estate investments from Anbang Insurance Group, a financial conglomerate with close ties to the Chinese state. After media reports about the deal, talks were called off.

Publicly, Ivanka Trump has taken a gracious, charming approach toward Beijing. During the Mar-a-Lago meetings, her daughter, 5-year-old Arabella, stood in a gilded room and sang a traditional Chinese song, in Mandarin, for China's president, Xi Jinping. The video, which was lavishly praised by Chinese state media, played over 2.2 million times on China's popular news portal qq.com.

The week of the summit, 3.4 tons of Ivanka Trump handbags, wallets and blouses arrived in the U.S. from Hong Kong and Shanghai. U.S. imports of her merchandise grew an estimated 40 percent in the first quarter of this year, according to Panjiva Inc., which maintains and analyzes global shipping records.

Gorelick, Ivanka Trump's attorney, said that she and her husband would steer clear of specific areas that could impact her business, or be seen as conflicts of interest, but are under no legal obligation to step back from huge swaths of policy, like trade with China.

Since her father was elected president of the United States, global sales of Ivanka Trump merchandise have surged and the company has applied for at least nine new trademarks in the Philippines, Puerto Rico, Canada and the U.S. The commercial engine of the first daughter's brand is stronger than ever even as she builds a new political career from her West Wing office.

Sales hit record levels in 2017, despite boycotts and several stores limiting her merchandise. U.S. imports, almost all from China, shot up an estimated 166 percent last year.

The brand has also launched new active wear and affordable jewelry lines, and is working to expand its global intellectual property footprint.

The commercial currents of President Donald Trump's White House are unprecedented in modern American politics, ethics lawyers say. They have created an unfamiliar landscape riven with ethical pitfalls, and forced consumers and retailers to wrestle with the unlikely passions now inspired by Ivanka Trump's mid-market collection of ruffled blouses, shifts and wedges.

Using the prestige of government service to build a brand is not illegal. But criminal conflict-of-interest law prohibits federal officials, like Ivanka Trump and her husband Jared Kushner, from participating in government matters that could impact their own financial interest or that of their spouses. Some argue that the more her business broadens its scope, the more it threatens to encroach on the ability of two trusted advisers to deliver credible counsel to the president on core issues like trade, intellectual property and the value of Chinese currency.

"Put the business on hold and stop trying to get trademarks while you're in government," advises Richard Painter, who served as chief White House ethics lawyer under George W. Bush.

Trademarks also pose ethical, and possibly legal, implications for government employees because they are granted by foreign states and confer the monopoly right to sell branded products in a particular country — an entitlement that can be enormously valuable. Intellectual property lawyers say trademarks are also a crucial prerequisite for cutting licensing deals, which form the basis of both Ivanka Trump's and Donald Trump's global business strategies.

As a White House employee, Ivanka Trump is also subject to the same rule. "She needs to be careful," said Painter, the former Bush administration lawyer, who is advising on the lawsuit. "If her trademarks are anything but routine they also would be prohibited emoluments from the Chinese government."

Today, Ivanka Trump Marks LLC has 16 registered trademarks in China and more than 30 pending applications, along with at least five marks granted preliminary approval since the inauguration, according to China's Trademark Office database and gazette. Database filings are not immediately updated and may lag actual approvals. Altogether, they cover a wide range of goods and services, including cosmetics, jewelry, leather handbags, luggage, clothes, shoes, retail, spa and beauty services. There is no sign the recent approvals were particularly swift. China's Trademark Office did not respond to a request for comment.

Globally, the company has more than 180 pending and registered trademarks in countries including Canada, India, Japan, Israel, Mexico, Turkey and Saudi Arabia, as well as the U.S. and Europe, public records show. In December, the company applied for five trademarks, covering handbags and wallets in Puerto Rico, and lingerie and other clothes in the U.S. After the inauguration, the company filed four more applications, for branded clothing and shoes in the Philippines, and perfume and other items in Canada.