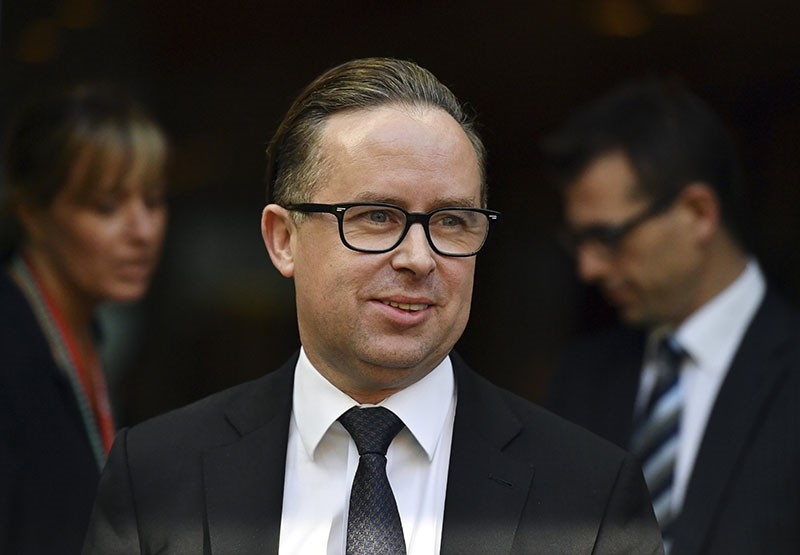 Qantas chief Alan Joyce, who was hit in the face by a pie in a protest against gay marriage in Australia, said Wednesday he would not be silenced on important social issues.

Joyce, a staunch supporter of equal rights, said he plans to bring charges against his attacker.

The airline chief was targeted on Tuesday while addressing a business breakfast in Perth, when a man wearing a suit walked on stage and smothered a lemon meringue pie over the stunned Irishman.

He was named by the Australian Broadcasting Corporation as 67-year-old former farmer Tony Overheu, a devout Christian opposed to same-sex marriage.

"Alan Joyce is a very active individual in this process (towards marriage equality) and in that context he was appropriate (to target)," Overheu told the broadcaster.

"I've never done that sort of thing, I'm a law-abiding person but I think this is part of inevitable pushback.

"When the community is grumpy, figures who are overstepping the line have got to anticipate there will be pushback in some shape or form. The broad community have had a gutful."

In March Joyce, who is gay, was one of 20 chief executives of some of Australia's largest companies to sign a joint letter to Prime Minister Malcolm Turnbull in support of marriage equality.

It urged the government to "deliver civil marriage equality for every Australian so that our nation can move forward as a more inclusive place to live, work and play".

Joyce said in a statement Wednesday the pie incident would not stop him being vocal on the subject.

"I've long held the view that there is a role for companies and CEOs to speak up on economic and social issues. My opinion on this has not changed," he said.

"We'll continue to speak about important social issues including indigenous reconciliation, gender diversity and marriage equality, because it's the right thing to do."

He added to reporters that he would never cave in to "bullying".

"No attempt at bullying us into suppressing our voice will work," he said.

Police have so far only charged the man with providing false details, but the Qantas chief said he wanted to take it further.

"The police are continuing their investigation and my intention is to send a message that this type of behaviour isn't acceptable and that I have every intention of pressing charges," he said.

Despite strong popular support for marriage equality, Australia is seen as lagging behind nations which allow homosexual couples the right to wed.

Same-sex couples can have civil unions or register their relationships in most states across Australia, but the government does not consider them married under national law.

Debate on the issue had gone on for decades and Turnbull, a long-time supporter of equal rights, wanted to resolve the issue via a plebiscite in February.

But it was blocked by the Labor opposition, Greens and crossbench MPs who argued it would be expensive and spark divisive debate. They instead favor a free vote in parliament.