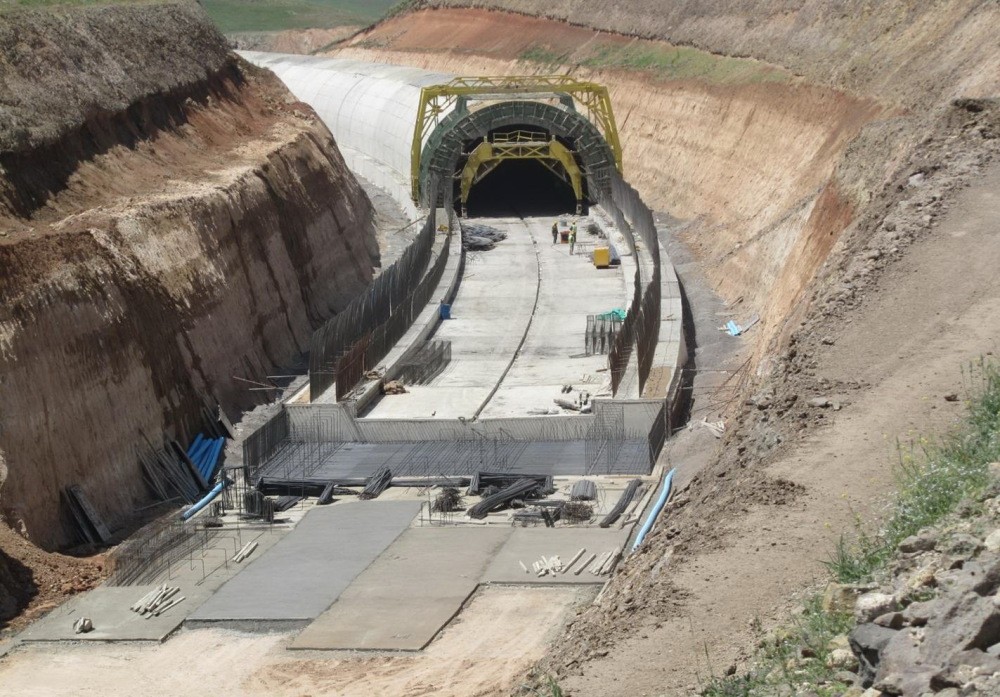 Transportation, Maritime Affairs and Communications Minister Ahmet Arslan said that the government wants to create an alternative to the Baku-Tbilisi-Kars Railway Project with a line that will run through Iğdır-Dilucu-Nakhchivan and finally to Iran via Kars.

Speaking to Anadolu Agency regarding the Kars-Iğdır-Dilucu-Nakhchivan Railway Project, a branch of the Baku-Tbilisi-Kars Railway Project, whose construction has reached the final stages in the eastern Anatolia region, Minister Arslan explained that if a train departs from Edirne, arrives in Kars and then uses the Baku-Tbilisi-Kars Railway, it will go to Kazakhstan, Turkmenistan and then to the north of China. "We also want to create an alternative, a line that will reach Iğdır-Dilucu-Nakhchivan and therefore Iran through Kars," he continued, suggesting that this will also complete a corridor through which the freight movement going eastward through Turkey can reach Iran, then Pakistan, India, and the south of China. "This is why we take this project very seriously," Arslan added.

Arslan pointed out that all the projects carried out between the east and the west of Turkey are complementary to the middle corridor in general, listing the Yavuz Sultan Selim Bridge, the other two bridges, Eurasia, Marmaray and the ongoing Çanakkale 1915 Bridge projects. Stressing that this middle corridor can bring the freight movement from Europe to the Middle East through Turkey, Arslan said, "That is why we want to create alternatives in addition to Baku-Tbilisi-Kars Railway while completing the middle corridor.

Noting that Iran and Azerbaijan are the other two relevant parties in the Kars-Iğdır-Dilucu-Nakhchivan railway project alongside Turkey, Minister Arslan said that they are working very closely with Azerbaijan and Nakhchivan on this project and also conducting processes together with Iran. "We've come to a certain stage in the studies. Of course, our international projects and Baku-Tbilisi-Kars experience show that it is not enough for only one country to be ready. Other relevant parties should also be ready," Arslan said.

Minister Arslan announced that the construction of the railway will begin following the agreement of the parties, adding that they have reached an agreement with Azerbaijan and Georgia in the Baku-Tbilisi-Kars Railway, and set out as three countries. "Now we continue our talks with Iran and Azerbaijan to complete this corridor in the same way. We will start the moment both sides are ready and synchronized," he said and stressed that all parties are aware of the importance of the Kars-Iğdır-Dilucu-Nakhchivan-Iran corridor, and that the talks and projects on the schedule continue.

Arslan stated that both ongoing and planned railways and highways will bring the fruit and vegetables of the eastern part of Turkey to target markets and contribute to the country's economy. Citing that attraction centers will support employment and production, while dams will support the production of these types of products, especially in regions where fruit and vegetable production is important. He explained that the transportation corridors that will be established, including railways, will provide easy access of fruit and vegetables to these markets. "All these provide an important advantage for the development of the country, as well as the creation of economic added value for people locally and the growth of the country's economy," he added.