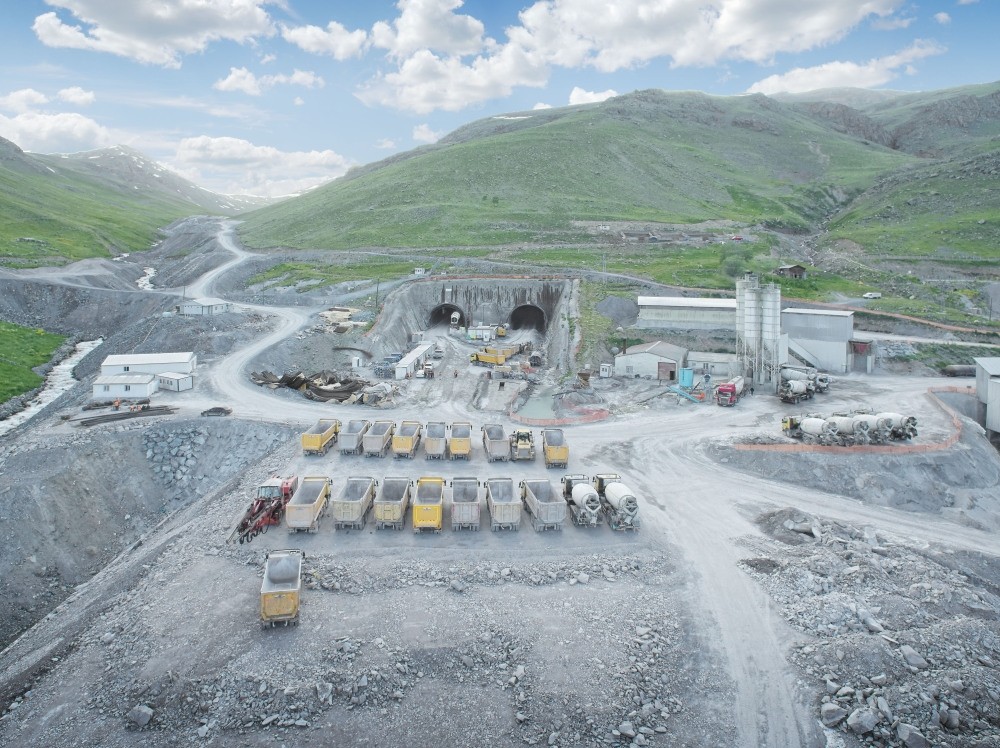 Like all infrastructural projects, construction of the Ovit Tunnel will make huge contributions to the economy of Turkey's Rize province, easing transportation and drawing more tourists to the region while boosting connectivity between neighboring countries and ports, turning the region into a hub for logistics

Currently under construction at an altitude of 2,640 meters on Mount Ovit in Rize's İkizdere district, the Ovit Tunnel, Turkey's second longest and the world's fourth longest highway tunnel stretching 14,300 meters in length, is slated for completion and will be put into service by the end of the year. The project will facilitate freight transportation and boost connectivity mechanisms between the region and neighboring countries, as well as major ports.

Plans for the Ovit Tunnel, which was brought to the agenda as the Rize-Erzurum Highway and Tunnel Project in the development plans of the Ottoman State in 1880, were laid out on May 13, 2012 under then-Prime Minister Recep Tayyip Erdoğan's leadership. A ceremony titled the "Light at the End of the Tunnel" was held on Nov. 11, 2016 with Prime Minister Binali Yıldırım in attendance.

The Ovit Tunnel will serve as the fourth longest tunnel in the world and second longest in Turkey with a total length of 14,300 kilometers, including 369 meters of "avalanche tunnel," second only to the 14,500-kilometer long New Zigana Tunnel which is currently under construction on the Trabzon-Gümüşhane highway.

The tunnel's entrance altitude will be 1,919 meters with an exit altitude of 2,363 meters, with a longitudinal slope of 2.13. While excavations for the 1,710-meter long roadway approaching the tunnel have neared completion, the remaining concrete production in the 1,400-meter long "avalanche tunnel" will be completed by the end of the year.

In tunnel construction, where 90 percent of hardware work is completed, 773 people continue to work in shifts.

The Rize-Erzurum Highway project, for which superstructure and bridge crossing works have already been launched, is slated to be commissioned by the end of the year.

The Ovit Pass will be open all year-round upon completion of the tunnel, which will eliminate the former five-month-long closure annually due to heavy snowfall and avalanche dangers. Currently, the route is frequented by an average of 1,135 vehicles passing from İkizdere to İspir on a daily basis during the seven months of the year that the route is open.

Built as a double tube and estimated to cost about TL 1.1 billion, the Ovit Tunnel will be an important alternative to other roads connecting the Black Sea to eastern and southeastern Anatolia.

As a result of the commissioning of the tunnel, the Rize-Erzurum Highway will be reduced in length from 250 kilometers to 200 kilometers.

Rize Chamber of Commerce and Industry (RTSO) Chairman Şaban Aziz Karamehmetoğlu stated that 7,000 containers can potentially be shipped to the region with activation of the Organized Industrial Zone that is under construction in the vicinity of the Ovit Tunnel, suggesting that with the completion of the tunnel, the Rize-Artvin Airport which is currently under construction, as well as logistical projects, will offer the eastern Black Sea region crucially strategic transfer hubs.

Indicating that this will have major contributions on the lives of locals in the region, he said that local merchants and industrialists should evaluate their potential gains.

Karamehmetoğlu also underlined that the Ovit Tunnel will provide major tourism returns in addition to its contribution to trade in the Black Sea and eastern regions of Turkey. "In pre-tunnel surveys, we have seen that 97 percent of people have never traveled to the 16 provinces in the east and do not know these areas, in a cultural sense," he said. "In recent years, visitors have begun to come to our province. The Ovit Tunnel will offer a brand new alternative in the domestic tourism movement."

An exemplary tunnel for Turkey

The lighting and interior design of the Ovit Tunnel are being projected as a model of exemplary production in Turkey.

While lighting in other tunnels in Turkey is typically provided with one channel, lighting in the Ovit Tunnel will be specially designed via a double channel, eliminating the dangers of lack of visibility and lack of attention among drivers due to the length of the tunnel.

Additionally, the inside of the tunnel will be painted with red stripes on white backgrounds to increase safety, while rest areas along the motorway will be specially painted and illuminated, preventing the loss of visibility among drivers in the 14,300-kilometer-long tunnel and offering them comfortable places to pull over.

Karamehmetoğlu told Anadolu Agency (AA) that the Ovit Mountain is the biggest landmass between the Turkish Black Sea coast and the east, asserting that this obstacle will be removed with the tunnel.

Noting that the tunnel will be put into service by the end of 2017, Karamehmetoğlu said the Ovit Tunnel Project is not only a project affecting the Rize-Erzurum region but also all 16 provinces in Turkey's east, adding that it will serve as a route that will be the exit point for these cities.

Pointing out that Turkey has made very serious investments in the Southeastern Anatolia Project (GAP) in recent years, Karamehmetoğlu stressed that products in this region should be marketed to the Black Sea region as well as second-world countries, adding that the Rize-Erzurum Ovit Mountain Road offers drivers a shortcut for moving products from Turkey's southeast to ports along the coast.

The Ovit Tunnel is located in a strategic region of eastern Turkey and will be linked to ports from which goods are exported to neighboring countries. Moreover, the tunnel will ease transportation to the Baku-Tiflis-Kars Railway, which will be operational by the end of the summer.

The highway tunnel, which will connect Rize's İkizdere district and Erzurum's İspir district in northeastern Turkey, is also expected to reinvigorate the historic Silk Road. When connected to other road projects, the tunnel will help provide an uninterrupted link between the Silk Road and the Ural Mountains, offering easy access to the Baku-Tiflis-Kars Railway, connecting Turkey to Northern China and constituting an important part of the middle corridor on the One Belt One Road (OBOR) initiative that aims to revive the ancient Silk Road.

Such infrastructural transportation projects are believed to reveal the region's trade potential. In that regard, the tunnel is expected to make Erzurum a warehouse and storage hub that is connected to ports; hence, facilitating freight shipment to neighboring countries.