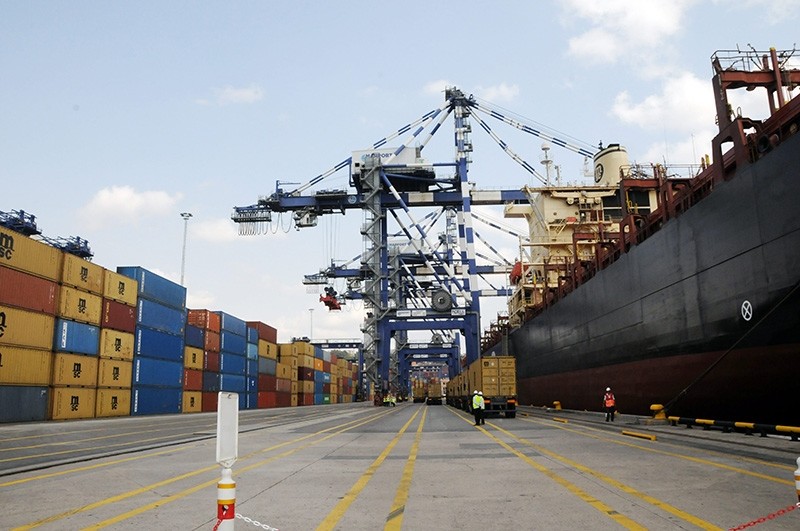 The value of Turkey's exports increased by 1.8 percent to $12.7 billion in June compared to the same month of the previous year, Turkey's main exporters' association said Saturday.

The Turkish Exporters' Assembly (TIM) said exports in the first half of the year also climbed by 8.2 percent to reach $76.4 billion.

Turkey's total exports in the last 12-month increased by 4.5 percent compared to the previous 12 month period to stand at $147.3 billion.

The automotive sector played the most important role with $2.5 billion in exports, showing an increase of 16.4 percent compared to the same month last year.

The clothing and chemical sectors closely followed with $1.4 billion and $1.3 billion, respectively.

The highest increase among industrial products was seen in ship and yacht sector exports with a 178 percent increase, TIM said.

Olive and olive oil products were also among sectors which showed a strong growth in June with an increase of 63 percent.

Among the top 20 destinations for Turkey's exports, Russia saw the sharpest rise, with 89 percent, due to a fivefold increase of fresh fruit and vegetable exports, according to TIM.

Moreover, exports to Qatar, which saw an increase of 49.2 percent in June, rose to $17.6 million.

Exports to Turkey's main trading partner, the EU, increased by 2.8 percent month-on-month in June, making its share of the country's total exports 50.5 percent, the association said.

Speaking at a press conference on Saturday, Deputy Prime Minister Mehmet Şimşek said that Turkey can escape from the middle-income trap, in which a country's growth slows after reaching middle-income levels, by following a pattern of growth based on exports.

"The solution to the middle-income trap is exports. There is no other formula," he stressed.

Şimşek stated that mobilization for exports needs to be maintained and added:

"Export is a must for better-balanced growth. Growth based solely on domestic demands has limits. For this reason, we should continue pushing our exports."

Commenting on the new figures, TIM head Mehmet Büyükekşi said the limited rise in June exports was due to less working days in the month due to the Muslim Eid al-Fitr holiday compared to the same period last year.

Büyükekşi said Turkey saw a strong recovery in exports in the first five months of the year, which has helped the country's growth rate.

In the first five months, Turkey's exports rose 9.5 percent to $64.3 billion compared to the same period last year, according to the Turkish Statistical Institute.

"We believe that we will reach higher growth rates with the contribution of exports in the coming periods," Büyükekşi underlined.