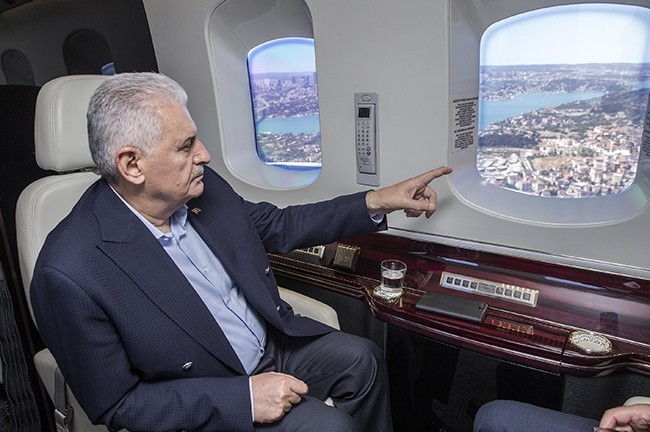 "Currently 55 percent [of the construction] of the airport is completed. It will be completely finished and will start operating Oct. 29 next year," Yıldırım said as he examined the construction site from a helicopter along with Transportation, Maritime and Communications Minister Ahmet Arslan, Istanbul Governor Vasip Şahin and Istanbul Metropolitan Mayor Kadir Topbaş.

According to Yıldırım, at the initial stage istanbul's third airport would serve approximately 90 million people.

"Even at the first stage this is going to be the largest airport in the world. Therefore, with the opening of this airport [Turkey] will become the meeting point for Africa, Europe, the Middle East and Asia and will become the center of aviation," the prime minister said, adding that the new airport would bring a new dimension to regional and global economy.

Evaluating the scale of the construction, Yıldırım said that "a new city" is being built, which at the opening would employ 100,000 people.

"In 25 years [Turkey] will get 26.5 million euros ($30 million) [of revenues from the airport]. After 25 years, the world's biggest airport would be a bonus. Nowhere in the world there is business of this kind," Yıldırım said.