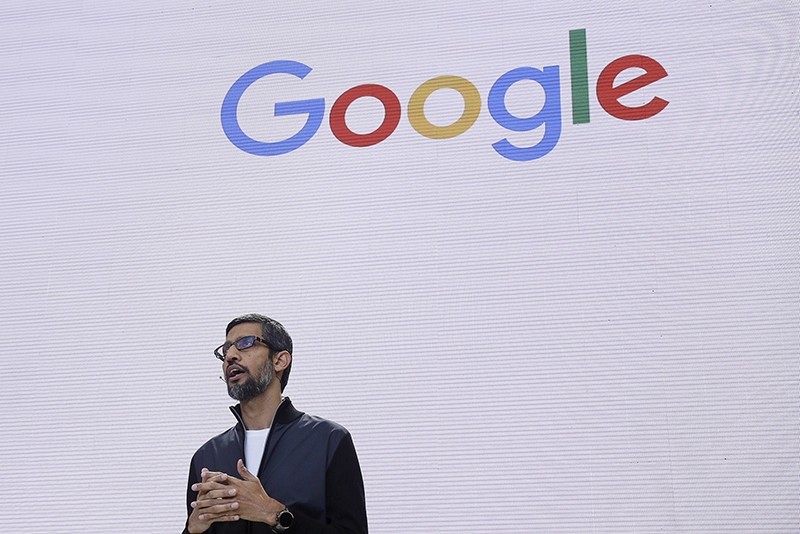 In this file photo dated Wednesday, May 17, 2017, Google CEO Sundar Pichai delivers the keynote address for the Google I/O conference in Mountain View, Calif. (AP Photo)
by Compiled from Wire Services Jul 12, 2017 12:00 am
A French court ruled on Wednesday that Google was not liable to pay 1.1 billion euros ($1.3 billion) in back taxes demanded by the French authorities.

"The French company Google Ireland Limited (GIL) is not taxable in France for the 2005 to 2010 period," the court ruled.

Google paid just 6.7 million euros in corporate taxes in 2015 in France by booking revenues for its online empire at its European subsidiary in low-tax Ireland, a legal loophole prized by multinationals.

The group employs 700 people in France but advertising contracts for its search engine or video-sharing website YouTube are signed with its Irish subsidiary.

The French claim was the latest in a series against the California-based group, which faces mounting legal problems in the EU.

The EU hit Google with a record 2.4 billion euro fine on June 27 for abusing its dominant position in the search engine business and illegally favoring its own shopping service over rivals.

In 2016, European competition chief Margrethe Vestager shocked Washington and the world by ordering iPhone manufacturer Apple to repay 13 billion euros in back taxes in Ireland after paying a near-zero rate of tax some years.

Newly elected French President Emmanuel Macron promised to get tough on U.S. internet giants during his campaign, seeing their low tax rates as a source of resentment about globalization and unfair on European companies.

In a statement, the French finance ministry said it was considering an appeal, which must be lodged within two months.
Last Update: Jul 12, 2017 11:52 pm
RELATED TOPICS