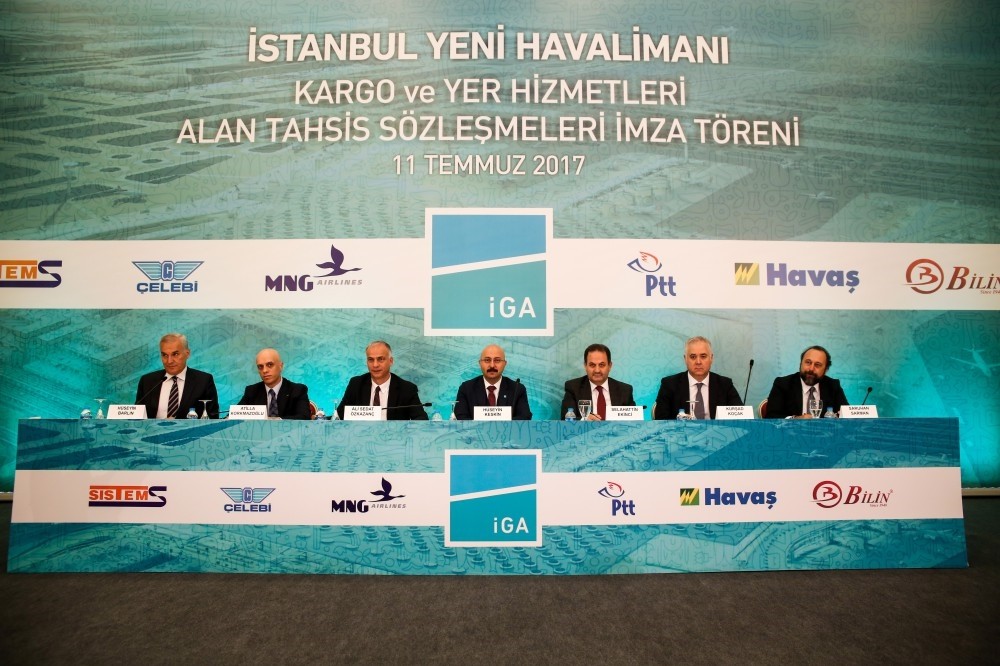 A deal worth 250 million euros for the Cargo City and Ground Services Campus at Istanbul's new airport, which will transform Istanbul into the new center of international transportation, was signed between IGA Airport Operations Inc. and six other companies

An area allocation contract worth 250 million euros was signed between IGA Airport Operations, Inc. and six other companies for the Cargo City and Ground Services Campus at the Istanbul Third Airport. The deal is said to be valid for an operational period of 25 years.

Six of Turkey's largest cargo companies including MNG, PTT, Çelebi Hava Servisi, HAVAŞ, Sistem Logistics and Bilin Logistics will serve in the Cargo City while MNG, Çelebi Hava Servisi and HAVAŞ will operate on the Ground Services Campus, according to the agreement signed between Istanbul Third Airport administrators and the companies.

Speaking at the agreement signing ceremony, IGA Airport Operations Inc. CEO Hüseyin Keskin said that 55 percent of the airport's construction has already been completed and 30,000 people are working day and night to finish the airport in its entirety. He also added that commercial agreements are being signed in the scope of the Istanbul Third Airport, noting that they have recently signed a duty-free contract.

Keskin noted that bidding for the food and beverage segment in the scope of the construction was completed in the first quarter of this year, adding that bidding for allocated advertising areas of the airport will take place in the coming months. "Today, we are signing an agreement that can be regarded as the greatest agreement recently signed in the aviation sector," he said.

'Leasing contracts signed for half of all leasable areas'

Stressing that Turkey is a major hub for air cargo transport because of its strategic geographical position, its developing economy and the major investments Turkish Airlines (THY) has made in Turkish cargo companies, Keskin said that ground services have been given high priority in terms of efficient airport operations' management.

Highlighting that IGA Airports Operations, Inc. has reached the necessary, initial agreements for cargo and ground services amid efforts to make Istanbul an aviation center offering uninterrupted services to millions, Keskin said efforts are being propelled by aims to further Istanbul's global legacy as a city that has served as a central meeting point for numerous civilizations for centuries. Keskin added that within the scope of these aims, an area allocation contract has been signed with IGA worth 250 million euros with the said six major Turkish cargo companies, recalling that IGA also signed the duty-free agreement last year. Keskin went on to note that the food and beverages segment is in the contractual phase, reiterating that bidding for allocated advertising areas of the airport will take place in the coming months.

"So far, we have leased 50 percent of all leasable areas and signed contracts with nearly 100 companies. I believe that as a result of the commercial volume these investments will generate, our airport will be a tremendous contribution to the country's economy, as well," he continued.

'Istanbul will be new transportation hub'

Indicating that the said agreements will accelerate economic growth with a "butterfly effect" - strengthening Turkey's commercial power - Keskin stressed that every company that signs these agreements in the scope of the Istanbul Third Airport are doing so with the awareness that they are contributing to the nation's economy and propelling the country further into the aviation sector of the future.

He said the Istanbul Third Airport will transform Istanbul into a new, international transportation hub thanks to the designated Cargo City that will be located in the project area, underlining that the said agreement is of crucial importance in terms of the national economy. He added that ground services at the Istanbul Third Airport will be allocated to a 150,000-square-meter area.

Informing that this figure will measure 1.4 million square meters in the Cargo City for cargo airplane parking positions, Keskin said: "That corresponds to 200 football fields in international standards. The Cargo City is being constructed in a way that will allow 35 wide cargo planes to operate simultaneously."

Keskin said that according to the General Directorate of State Airports' Authority (DHMİ) figures, the cargo capacity of Atatürk Airport is expected to increase from 918 tons at the end of 2016 to 1 million tons by the end of 2017, suggesting that the Istanbul Third Airport is open to further bolstering this capacity. "When the airport opens, it will have a cargo capacity of 2.5 million tons. Atatürk Airport, which currently holds the world's largest cargo freight, is as large as the Hong Kong Airport with volume just over 4.5 million tons," he said, stressing that the Istanbul Third Airport will have a capacity of 5.5 million tons when all phases are complete.

Keskin said that MNG, PTT, Çelebi, HAVAŞ, Sistem Logistics and Bilin Logistics will continue their activities on an area of approximately 200,000 square meters.

'Difficulty in keeping up with demand'

Keskin noted that IGA also has a protocol in place for dealing with cargo companies abroad, adding that domestic companies which moved quickly and sought to invest as soon as possible got to sign the agreements on the spur of the moment. To illustrate, while some "Rent-A-Car" companies are quoted as saying that rental costs per-square-meter are high, Keskin has said that IGA is currently having difficulty keeping up with demands for "Rent-A-Car" companies.

After releasing the statement, Keskin and the executives of the said six companies signed the agreements.