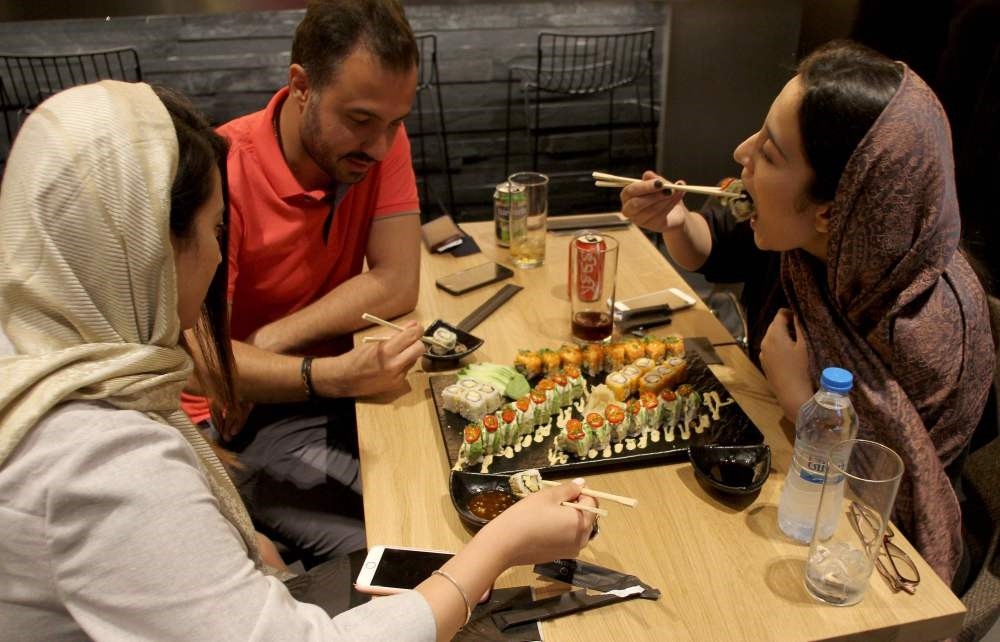 Iranians eat at a high-end French sushi chain that opened the previous week in northern Tehran.
by Jul 20, 2017 12:00 am

For years, Iranians have had to put up with the likes of "Mash Donalds" and "Pizza Hat." Now real Western food franchises have finally arrived, but doing business in Iran is not for the faint-hearted. Despite strict international sanctions being eased under a nuclear deal with world powers last year, the Iranian economy remains bogged down by red tape and struggles to attract foreign investors. But a couple of European food franchises have decided the risks are worth taking for a taste of the estimated 6 billion euros Iranians spend in restaurants each year, and which local consultancy ILIA says will double in the next decade.

Spain's Telepizza opened its first outlet this month through an Iranian consortium that plans to pump 100 million euros into expanding nationwide. But one of the first Europeans to really get his hands dirty on the ground is 41-year-old French entrepreneur Amaury de la Serre, who bought the rights to launch Sushi Shop in Iran after falling in love with the country during a visit in 2013. The first branch of the high-end French chain opened last week in a chic north Tehran neighborhood, marking the culmination of a bruising 18 months of work.

"There's a strong government will to bring foreign capital and know-how here, but at the day-to-day administrative level, it's hell," de la Serre told AFP.

"Everything takes time, everything is complicated. It is very, very difficult to deal with customs. But no pain, no gain. And things are changing at full-speed here. I love this country and I'm very excited to be a spectator to its evolution," he said.

Getting the supply chains running was certainly complex, the restaurant uses 150 mostly local suppliers and must ship fresh fish from Norway three times a week. It took a year just to get the license to import Japanese sauces, and navigating Tehran's notorious real estate rackets was a saga in itself. The government says it is trying to streamline its bureaucracy, but Iran actually fell three places in this year's ease of doing business rankings from the World Bank, down to 120 out of 190 countries. Still, some of the biggest headaches are back in Europe, where banks are so afraid of U.S. penalties that they freeze accounts at the merest whiff of a link to Iran.

But, while he remains bullish on Iran's economic prospects, there are enough storm clouds on the horizon to keep him cautious.

"We wanted to launch several brands at once, but then Trump arrived so we're taking the foot off the pedal a little," said de la Serre.

"Expansion in the fast-food sector is a job creator precisely where Iran needs it most," wrote Esfandyar Batmanghelidj, founder of the Europe-Iran Forum, in a recent briefing note. "After all, many of the world's greatest entrepreneurs got their start delivering pizzas."