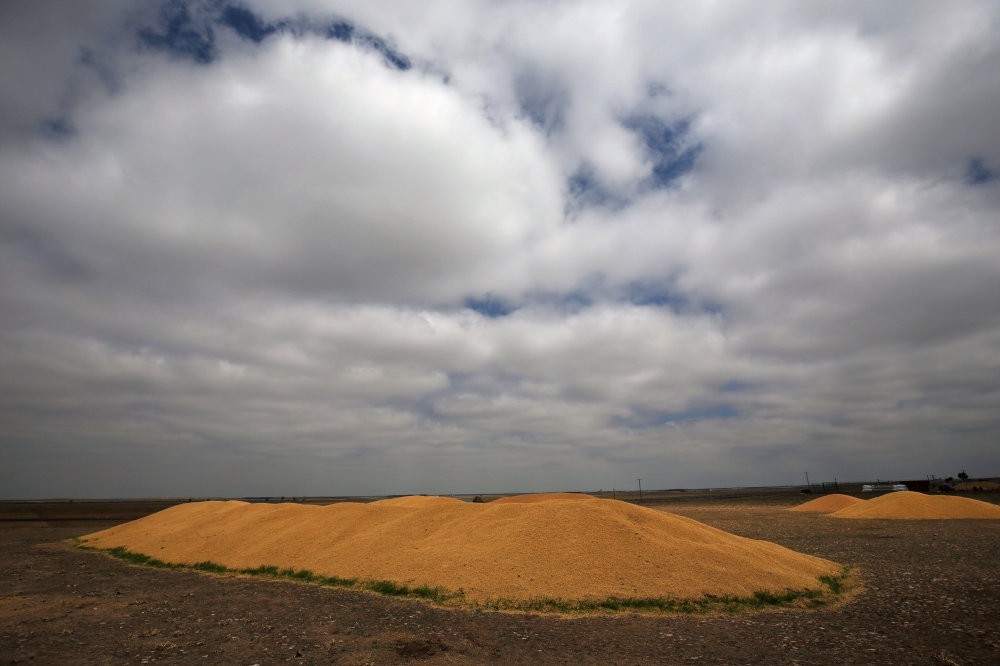 Mounds of barley grains are seen in Madrigal de las Altas Torres, Spain. Researchers calculated that by 2050, higher CO2 concentrations will sap the protein contents of barley by 14.6 percent.
by Aug 03, 2017 12:00 am

Rising carbon dioxide levels from global warming will drastically reduce the amount of protein in staple crops like rice and wheat, leaving vulnerable populations at risk of stunted growth and early death, experts warned yesterday. Researchers say they still don't understand how or why carbon emissions sap protein and other nutrients from plants, but the mystery is one that could have devastating consequences across the globe. An additional 150 million people globally may be at risk of protein deficiency by 2050 because of the rising levels of carbon dioxide in the atmosphere said the report in the journal Environmental Research Letters. The study, led by Harvard University researchers, is the first to quantify the impacts of global warming on the protein levels of crops and relies on data from open field experiments in which plants were exposed to high concentrations of carbon dioxide.

Global dietary information from the United Nations was used to calculate the impact on people who live dangerously close to the edge when it comes to getting enough protein. Without it, growth is stunted, diseases are more common and early mortality is far more likely. Carbon dioxide is a byproduct of fossil fuel burning and helps to trap heat around Earth. Without immediate action, these emissions are expected to climb in the decades to come, resulting in rising seas, hotter temperatures and more extreme weather events. A leading hypothesis was that carbon dioxide might increase the amount of starch in plants, thereby decreasing protein and other nutrients. However, lead author Samuel Myers, a senior research scientist in Harvard University's T. H. Chan School of Public Health, said the experiments did not back up the theory.

"The short answer is we really have no idea," he told AFP. "We've looked into it pretty extensively." Protein was not the only nutrient to take a major hit.

Other research has shown that rising carbon dioxide levels will cut key minerals, like iron and zinc, in staple crops, leading to further nutritional deficiencies worldwide. Researchers calculated that by 2050, higher concentrations will sap the protein contents of barley by 14.6 percent, rice by 7.6 percent, wheat by 7.8 percent and potatoes by 6.4 percent.

"If CO2 levels continue to rise as projected, the populations of 18 countries may lose more than 5 percent of their dietary protein by 2050 due to a decline in the nutritional value of rice, wheat and other staple crops," the report said. A full 76 percent of the people on Earth rely on plants for most of their daily protein, particularly in the poorer areas of the globe. The hardest hit areas are expected to be sub-Saharan Africa, where millions already don't get enough protein in their diets, and South Asia where rice and wheat are common staples. India alone may lose 5.3 percent of protein from their standard diet, putting a predicted 53 million people at new risk of protein deficiency. Researchers said solutions may include cutting carbon emissions, supporting more diverse diets, enriching the nutritional content of staple crops and breeding crops that are less sensitive to the harmful effects of carbon dioxide.