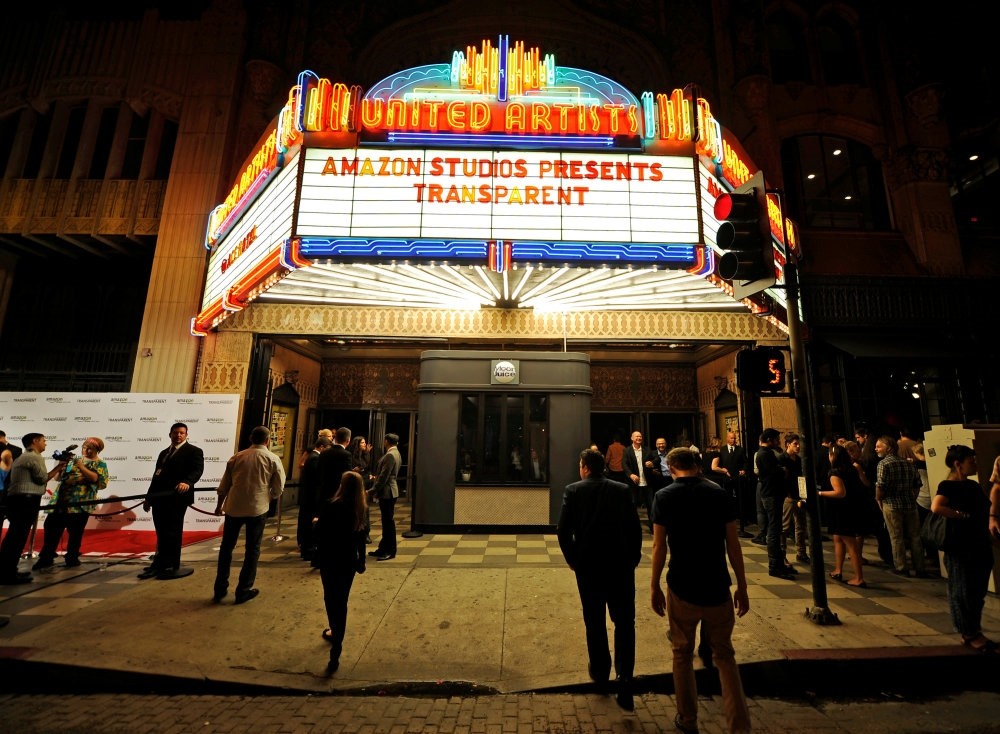 The marquee of United Artists theater is seen during Amazon's premiere screening of the TV series ,Transparent, at the Ace Hotel in downtown Los Angeles in 2014.
by Aug 04, 2017 12:00 am

Retail juggernaut Amazon.com is quickly ramping up the billions of dollars a year it spends on creating and licensing TV shows and films, signaling the retailer plans to be in show business for the long haul

Amazon said a step up in its spending on video projects and this could be one of several reasons it might report a loss this quarter, even as it expects more than $39 billion in overall sales. The issue came to the forefront of investors' attention last week. The company's shares, though up 33 percent this year, have dipped 5 percent since that warning. Wall Street analysts estimate Amazon's spending on content will have tripled to more than $4.5 billion by the end of this year from 2014. Catching customers' attention with video now represents one of the company's biggest investments, people familiar with the matter said. Amazon does not break out spending figures, and it declined comment on the subject. The company has visibly increased its footprint in Hollywood since opening a nearby studio in 2010, and picked up its first Academy Awards earlier this year.

The fast-growing investment in original video is just one of many simultaneous moves by Amazon into new areas, including brick-and-mortar retailing with its planned acquisition of Whole Foods Market Inc. Amazon has offered little detail for investors on where it is spending extra on content, or why, making it hard to evaluate if the investment is working. Broadly, it has said video is a key benefit of its money-spinning Prime shopping club, whose members tend to buy more goods from Amazon on top of paying a yearly fee.

"When we win a Golden Globe, it helps us sell more shoes," Chief Executive Jeff Bezos said at a Recode tech conference last year. "People who use Prime Video ... renew at higher rates, and they convert from free trials at higher rates."

One of the people familiar with the company's operations said Amazon has data scientists and economists running computer models to determine how video influences whether shoppers sign up for Prime after a free trial period. In turn, deciding the budget for video spending involves a complicated set of factors, including subscription fees and the value of extra spending by Prime members, the person said.

Despite its award wins for distributing "Manchester by the Sea" and producing TV shows such as "Transparent," Amazon's Hollywood push has not been entirely successful. An early plan to let anyone submit scripts online and crowd-source opinions on what shows to produce - an effort to disrupt Hollywood's lengthy and expensive greenlight system - has effectively been abandoned. Some have expressed concern that Amazon is focusing on niche audiences that likely are already Prime Video users, such as recent projects with director Woody Allen. Meanwhile, costs mount. Amazon paid $10 million to score distribution rights to "Manchester by the Sea" - one of the largest deals ever at the Sundance Film Festival. And it is paying about $50 million to stream 10 Thursday-night games for the U.S. National Football League this year, five times what Twitter Inc had paid for the same rights.