Panic spreads in Europe over millions of poisonous eggs 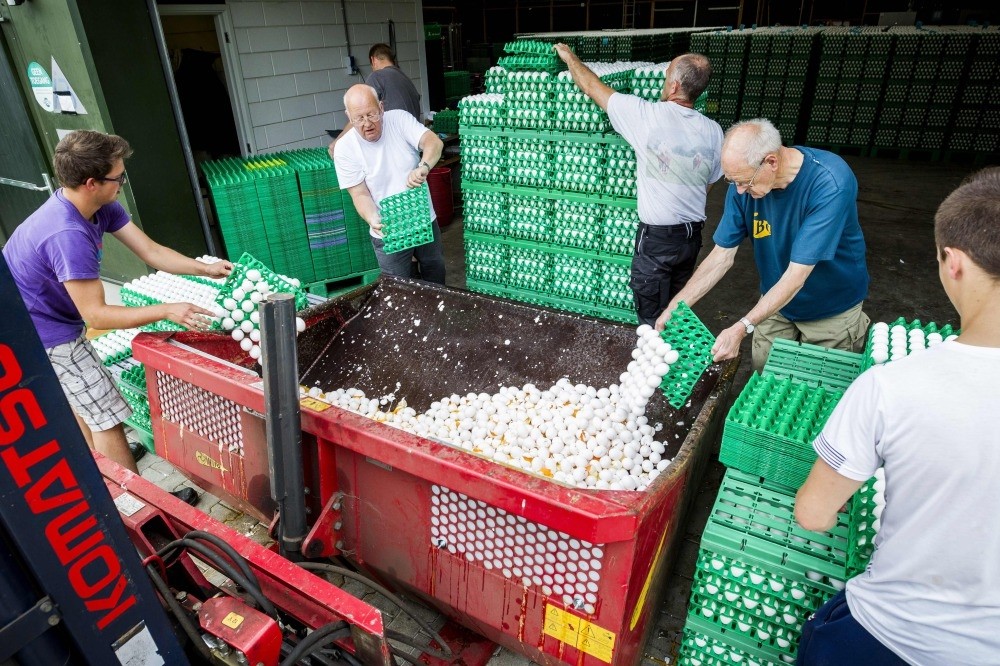 Farmers throw out eggs at a poultry farm in Onstwedde, Netherlands after the Dutch Food and Welfare Authority (NVWA)found they were contaminated with fipronil, a toxic insecticide outlawed for use in the production of food.
by Compiled from Wire Services Aug 05, 2017 12:00 am

Supermarkets in the Netherlands and Germany have been removing millions of eggs from their shelves believed to have been contaminated by a toxic insecticide in a widening food scandal. Amid fears the Dutch poultry industry could be facing huge financial losses, German officials said they believed 3 million tainted eggs had been made their way into the country and been sold. German discount supermarket giant Aldi said Friday it was pulling all the eggs from its shelves in the country, according to AFP. The chain said it was making the move "purely as a precaution" but acknowledged it could lead to "market shortages" for eggs in Europe's top economy as the impact of the affair widened. Aldi had already pulled all of the Dutch eggs from its stores earlier in the week, as it emerged that at least three million eggs tainted with a toxic insecticide had made their way to Germany and been sold. However a regional agriculture minister, Christian Meyer of Lower Saxony, told ZDF public television Friday that it was now believed 10 million contaminated eggs might have reached Germany. Authorities suspect the substance, fipronil, was introduced to poultry farms by a Dutch business named Chickfriend that was brought in to treat red lice, a nasty parasite in chickens. Dutch and Belgian media reports that the substance containing the insecticide was supplied to Chickfriend by a Belgian firm have not been confirmed.

In large quantities, the insecticide is considered to be "moderately hazardous" according to the World Health Organisation, and can have dangerous effects on people's kidneys, liver and thyroid glands. With losses expected to run into millions of euros (dollars), it is another blow for Dutch poultry farmers after 190,000 ducks were culled in November amid a highly infectious strain of bird flu. Marieke van der Molen, spokeswoman for the Dutch public prosecutor's office, said a criminal investigation had been opened to determine the source of the contamination. Belgium's federal food chain security agency (AFSCA) has also launched a criminal probe in cooperation with prosecutors. Belgian prosecutors are said to be examining the client list of two companies in Flanders specialising in the production and supply of anti-lice agents to Dutch and Belgian farms, among others. It is feared the illegal substance was mixed with an insecticide used legally in the keeping of chickens to improve its effectiveness.

The Dutch newspaper Trouw suggested one of the companies may have had clients in the U.K., France and Poland, although there is no suggestion so far that contaminated eggs are being sold in those countries. The Dutch daily newspaper de Volkskrant reported that the illegal mix had been used on farms in the Netherlands for more than a year. The Dutch food and product safety board, the NVWA, told the newspaper it was unclear whether contaminated eggs had been sold to customers over that period. "We have no way of checking because the eggs have been eaten," a spokesman said.

On Monday, the NVWA warned consumers that one batch of eggs "had such elevated levels of fipronil that their consumption would present a serious public health risk". They advised that eggs from at least 27 other farms should not be eaten by children.

The extent of the scandal has since grown. "We are still estimating the number of farms which have been affected, and the analysis of 600 samples is still ongoing," a spokesman for the NVWA said. The German agriculture minister, Christian Schmidt, called a "crisis teleconference" with his counterparts in German states where the insecticide had been detected.

Belgian media, citing the Flemish organisation that represents chicken and rabbit farmers, said several dozen Belgian producers had had their products blocked because of ongoing inspections.

The president of the Dutch poultry producers' union, Hennie de Haan, warned against an overreaction. "If other retailers follow the example of REWE, then the disaster cannot be overlooked", she said. "If this is temporary, it is still possible to catch up, but if it takes longer then the entire Dutch sector, including traders, is bankrupt. You do not just find a market for 4.5 billion eggs a year."

The Netherlands has almost 1,000 lay hen factory farms producing 11 billion eggs a year, of which more than half are exported, mainly to Germany. The Dutch food and product safety board has been criticised its handling of the scandal. At first officials said there was no danger to human health, before issuing a warning about certain batches of eggs. Its deputy director was subsequently reported as saying that consumers should avoid eggs altogether until tests for a banned pesticide had been completed. The board expects to complete tests on eggs from 180 farms which used the contaminated pesticide by the end of the week.