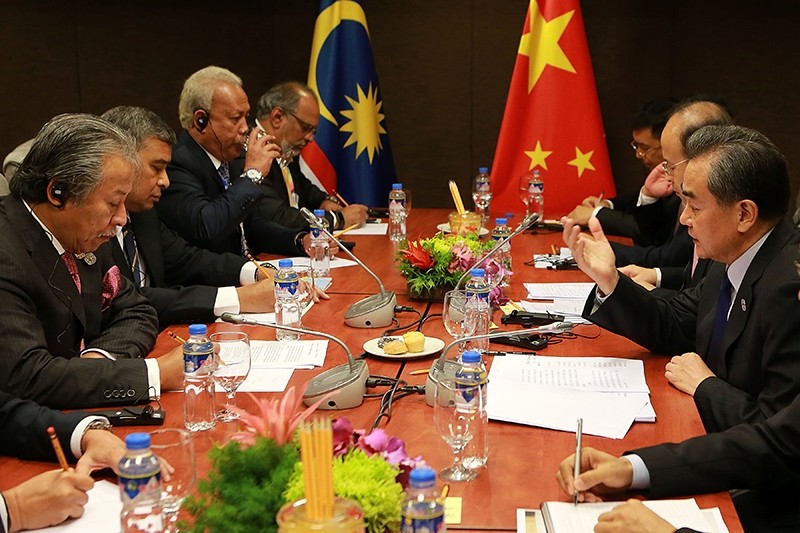 China and Malaysia broke ground on Wednesday on a $13 billion rail project linking peninsular Malaysia's east and west, the largest such project in the country and a major part of Beijing's Belt and Road infrastructure push.

The planned 688-km (430-mile) East Coast Rail Link will connect the South China Sea, large parts of which are claimed by China, at the Thai border in the east with the strategic shipping routes of the Straits of Malacca in the west.

It is among the most prominent projects in China's controversial Belt and Road Initiative, which aims to build a modern-day "Silk Road" connecting the world's second-largest economy by land corridors to Southeast Asia, Pakistan and Central Asia and maritime routes opening up trade with the Middle East and Europe.

"The ECRL is indeed yet another 'game changer' and a 'mindset changer' for Malaysia as it will significantly cut travel time to and from the east coast of the peninsula," Malaysian Prime Minister Najib Razak said at the ceremony half way along the route in Kuantan, which faces the South China Sea.

For China, the project is another expansion of its soft power in Malaysia, which also lays claim to some disputed South China Sea islands, and is critical for China's geopolitical and strategic interests.

"The China government has attached great importance to the China-Malaysia relations and has always considered Malaysia a dear neighbour and trustworthy partner who is committed to seeking mutually beneficial cooperation and common development in the country," Chinese State Councillor Wang Yong said at the ceremony, heading up a 100-strong delegation in Kuantan.

Najib said the project would be financed with an 85 percent loan from China Exim Bank and the balance through a "sukuk" Islamic bond programme managed by local investment banks.

The project is being built by China Communications Construction Co Ltd.

Beijing has repeatedly come to the rescue of Najib over the last year, as he sought foreign investment that would help him pay off a massive debt piled up by scandal-plagued state fund 1Malaysia Development Berhad (1MDB).

Najib has announced a spree of infrastructure projects in the last few months, many funded by China, as he builds up momentum for a general election that he has to call by mid-2018.

A Nomura research report last month said foreign direct investment inflows from China into Malaysia surged by 119 percent in 2016 and continued to grow at 64 percent year on year in the first quarter of 2017.

The growing closeness to China has raised eyebrows among Najib's opponents who have argued that the country has become too reliant on Chinese funds.

But Najib dismissed the concerns in a speech on Tuesday, saying turning away from Chinese FDI made "no economic sense".

There have been protests in Sri Lanka and Thailand over the Belt and Road initiative. A planned rail link through Thailand hit some resistance with what critics said were Beijing's excessive demands and unfavourable financing.

But Thailand's cabinet last month approved construction of the first phase of a $5.5 billion railway project to link the industrial eastern seaboard with southern China through landlocked Laos.