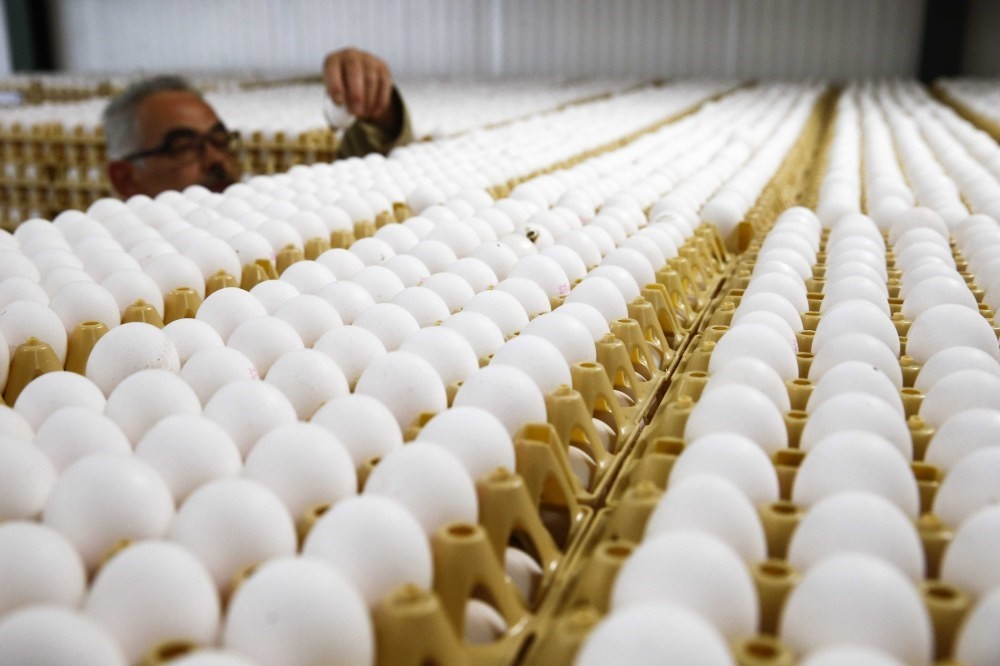 A man inspects fresh eggs stacked in crates at an egg farm in Doornenburg, the Netherlands. Dutch authorities have suspended the trade of the eggs since a number of farms have used Fipronil against red mites.
by Aug 15, 2017 12:00 am

As Europe-wide health scare continues, millions of eggs have been pulled from supermarket shelves across the old continent and dozens of poultry farms have closed since it emerged on Aug. 1 that eggs contaminated with fipronil, which can harm human health, were being exported and sold. Fipronil is widely used to rid household pets such as dogs and cats of fleas, but is banned by the European Union from treating animals destined for human consumption, including chickens. The World Health Organization says fipronil is "moderately hazardous" in large quantities, with potential danger to people's kidneys, liver and thyroid glands.

Food safety authorities in The Netherlands - where farmers are at the epicenter of the row - this week admitted they received an anonymous tip-off last November about the use of fipronil in chicken pens but refuted allegations of negligence.

"It's mind-blowing that there was no connection made then, between the tip-off and the fact that fipronil may have contaminated both the chickens and the eggs," Dutch investigative journalist and food writer Marcel van Silfhout told AFP.

Had the NVWA, the Dutch food and goods watchdog, acted at that point, the latest trouble to hit the export-dependent Dutch food industry could have largely been avoided, said Van Silfhout, who penned a critical book about food safety and the NVWA in 2014.

Martin van den Berg, a professor and senior toxicologist at Utrecht University's Institute of Risk Assessment Sciences, added: "If there were investigators who were experts in this area and understood the impact of fipronil, maybe there would have been a different reaction."

But after consultations following the tip-off, the NVWA decided "there was no reason to think that fipronil would enter either eggs or chickens," two Dutch ministers said in a letter to parliament on Thursday.

Said van Silfhout: "I can't understand why the alarm bells didn't go off when a poisonous substance has been found in a chicken pen."

Much of the current problem can be traced back to a growing loss of expertise; the NVWA and its predecessors have faced a series of cutbacks and trims since 2003, experts say.

The heavily burdened agency - which deals with food security but also general safety of goods - saw its permanent staff shrink from 3,700 full-time jobs in 2003 to 2,200 over the next decade, according to the Dutch Christian-based daily Trouw. Though the number is now back up slightly to about 2,600, many employees are not experts in their fields, according to Van Silfhout.

"There is no doubt that the problem started with the cutbacks since 2003," he said.

Since then, a series of food scandals to hit The Netherlands, including the outbreak of Q fever in 2007, which killed dozens of people, firmly laid the blame on the NVWA.

Although a 2013 scandal over horse meat - when it was discovered that a Dutch company was passing off horse meat as beef to be used in burgers and other meat products across Europe - had no health implications, the NVWA was criticized for not being stringent enough in its oversight. In 2003, the NVWA was moved from under the Dutch health ministry to agriculture, which then fell under the economic affairs ministry. Over the years, the farming industry started to largely "regulate itself and agrarian motives got the priority," Van Silfhout wrote in his 2014 book "Deboned - how safe is our food still?"

"At (farming) companies, economic considerations quickly took the lead," he told the Dutch daily Algemeen Dagblad in a recent interview.

"The NVWA must stand up for public interest, for food security. Alas, the agency in reality is not a food watchdog, but an extension of economic policy," Van Vollenhoven said.