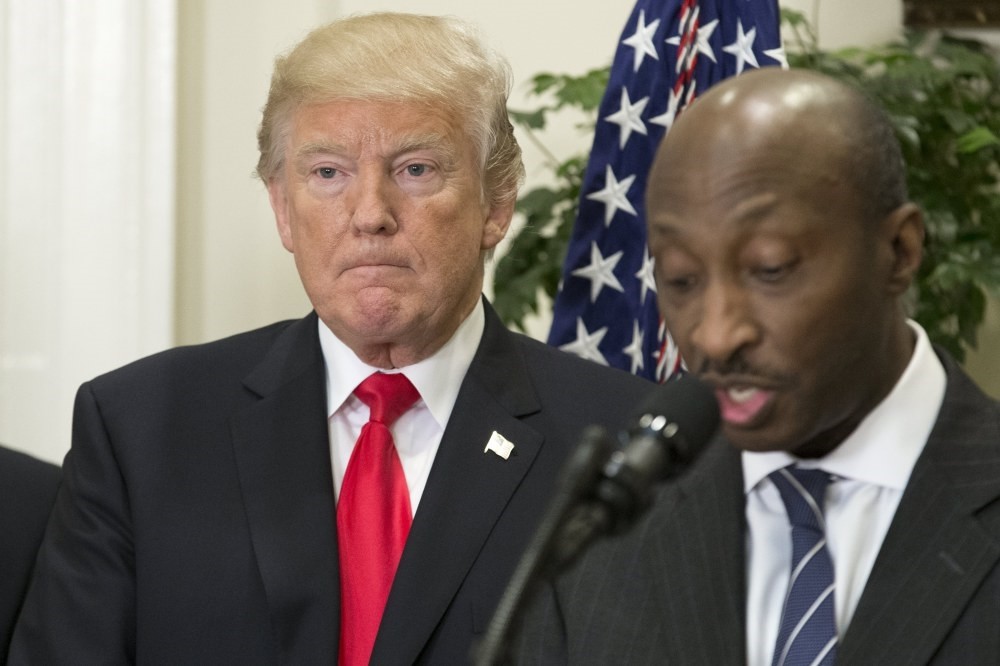 The CEOs of Intel, Merck and Under Armor resigned from President Trump's American Manufacturing Council following Trump's initially tepid response to the weekend violence at a white supremacists' rally in Charlottesville

The CEOs of athletic wear manufacturer Under Armour, computer chip maker Intel and pharmaceutical company Merck resigned Monday from the White House's American Manufacturing Council -with the Merck withdrawal drawing a quick and angry Twitter outburst from President Donald Trump. Merck CEO Kenneth Frazier cited the president's failure to explicitly rebuke the white nationalists who marched in Charlottesville, Virginia, over the weekend. He wrote on Twitter Monday that "America's leaders must honor our fundamental values by clearly rejecting expressions of hatred, bigotry and group supremacy, which runs counter to the American ideal that all people are created equal." Frazier is one of the few African-Americans to head a Fortune 500 company.

Under Armour CEO Kevin Plank resigned from the panel later Monday, saying his company "engages in innovation and sports, not politics." Plank did not specifically mention Trump or Charlottesville, but said his company will focus on promoting "unity, diversity and inclusion" through sports. Intel CEO Brian Krzanich followed, writing that while he had urged leaders to condemn "white supremacists and their ilk," many in Washington "seem more concerned with attacking anyone who disagrees with them."

Trump was under increasing pressure to call out the white supremacist groups involved in the Charlottesville demonstration. He lashed out almost immediately at Frazier, saying on Twitter that he will now "have more time to LOWER RIPOFF DRUG PRICES!" The president followed up later in the day, tweeting that Merck "is a leader in higher & higher drug prices while at the same time taking jobs out of the U.S. Bring jobs back & LOWER PRICES!"

Drugmakers have come under withering criticism for soaring prices in the U.S., including by Trump, though he has yet to act on a promise to contain them. With the barbs, Trump appeared to attack an industry executive who has tried to make drug pricing somewhat more transparent by revealing his company's overall drug price changes. In January, Merck reported that its average net prices -the amount the company receives after discounts and other rebates -increased in the years since 2010 in a range between 3.4 percent and 6.2 percent per year. That's about half as large as the increase in its retail prices. Much of the furor over drug prices recently has been over increases that have been far bigger and come one after another for drugs that have been on the market for years.

The exchange lit up social media early Monday, with many people lauding Frazier and blasting the president. Trump eventually made a statement condemning bigotry Monday afternoon at a press conference. Meanwhile, other executives stated their support for Frazier.

Unilever CEO Paul Polman wrote on Twitter, "Thanks @Merck Ken Frazier for strong leadership to stand up for the moral values that made this country what it is."

Frazier, who grew up in a poor neighborhood in Philadelphia, resigned from the manufacturing advisory council days after one person was killed and others wounded in violent clashes between white supremacists and protesters. Frazier and his siblings were raised by their janitor father after their mother died when they were very young. He has earned a reputation as a risk taker in the drug industry, pouring money into daunting research areas, particularly trying to develop a treatment for Alzheimer's disease. Frazier is not the first executive to resign from advisory councils serving Trump. Tesla CEO Elon Musk resigned from the manufacturing council in June, and two other advisory groups to the president, after the U.S. withdrawal from the Paris climate agreement. Walt Disney Co. Chairman and CEO Bob Iger resigned for the same reason from the President's Strategic and Policy Forum, which Trump established to advise him on how government policy impacts economic growth and job creation. The manufacturing jobs council had 28 members initially, but it has shrunk since it was formed earlier this year as executives retire, are replaced, or, as with Frazier and Musk, resign.