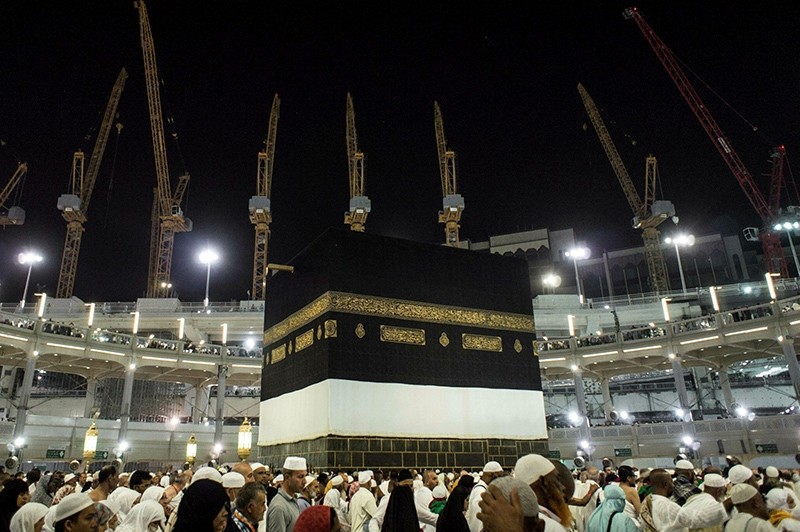 Towering construction cranes used in the ongoing expansion the Grand Mosque overlook the Kaaba, the cubic building at the mosque in the Muslim holy city of Mecca, Saudi Arabia, Sunday, Sept. 13, 2015. (AP Photo)
by Aug 17, 2017 12:00 am

Saudi Binladin Group will restart work next month on the $26.6 billion expansion of the Grand Mosque in Mecca, nearly two years after work stopped in the wake of a crane collapse at the site that killed 107 people, sources told Reuters Thursday.

Work will resume after the annual haj pilgrimage, and Saudi Binladin will pay outstanding salaries owed to staff involved in the project beginning on Aug. 20, according to a notice that the company sent to banks and which was seen by Reuters.

Banking and construction industry sources confirmed the plan. Saudi Binladin, one of the country's top construction conglomerates, and the the Ministry of Finance were not immediately available to comment.

Development of the Grand Mosque and its surrounding area to accommodate more worshippers was halted after the fatal construction accident in September 2015, and then remained on hold as government finances were squeezed by low oil prices.

The government is now enjoying a moderate recovery in oil income, and it is keen to resume work on big religious tourism and infrastructure schemes as part of a drive to diversify the economy beyond oil exports.

Its plan to restart construction at the Grand Mosque is a fresh sign of the rehabilitation of Saudi Binladin, which was temporarily banned from winning new state contracts after the crane collapse and has been damaged financially by a deep slump in the construction sector.

The Ministry of Finance has allocated a portion of this year's budget to key projects and has been in talks with Saudi Binladin in recent weeks about restarting several big schemes, the sources said. The ministry pledged to make payments that would enable Binladin to pay its staff, they said.

Another stalled government project in which Saudi Binladin is involved, the $3.5 billion construction of the Abraj Kudai hotel complex in Mecca, will restart in coming months, sources told Reuters earlier this week.

The company also restarted work earlier this year on the new King Abdulaziz Airport in Jeddah.