The real revolution in North Korea is rise of consumer culture 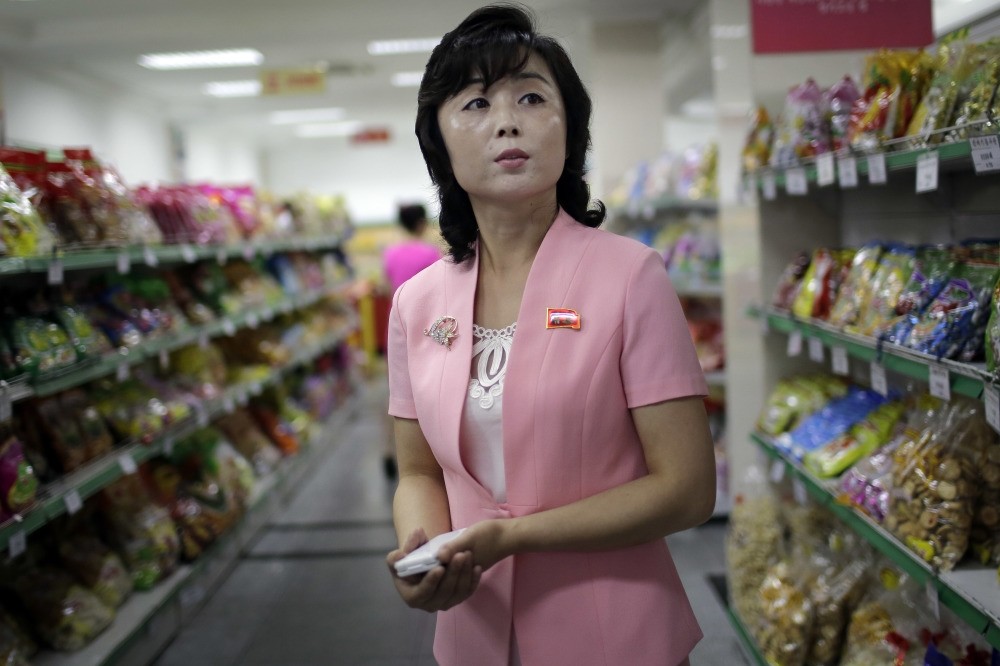 Song Un Pyol, manager at the Potonggang department store, stands in the snacks aisle while being interviewed by The Associated Press in Pyongyang.
by Associated Press
Aug 19, 2017 12:00 am

Like all North Korean adults, Song Un Pyol wears the faces of leader Kim Jong Un's father and grandfather pinned neatly to her left lapel, above her heart. But on her right glitters a diamond-and-gold brooch. Song, who manages a state-run supermarket with freezers stocked full of pork and beef and rows of dairy, bakery and canned goods, is part of a paradigm shift within North Korea.

Three generations into the Kim family's ruling dynasty, markets have blossomed and a consumer culture is taking root. From 120 varieties of "May Day Stadium" brand ice cream to the widespread use of plastic to pay the bills, it's a change visibly and irreversibly transforming her nation. While Kim has in recent weeks gained attention for his threat to fire missiles near Guam, his trademark two-track policy focuses on the development of both nuclear weapons and the economy. But like nuclear weapons, a more consumer-friendly economy is a risky business. Facing even more international sanctions and a flood of Chinese imports that has generated a huge trade imbalance, the North Korean economy may be in a bubble that could soon burst. Prices for gasoline imports have soared more than 200 percent in less than six months. The wealth brought by new markets could also come with political instability.

Kim Jong Un's slogan of "Parallel Development" -guns and butter, so to speak -reflects an inescapable reality of his era. In the 1990s, reeling from floods, famine and the collapse of the Soviet Union, North Korea could no longer afford to provide its citizens with basic needs. North Koreans turned to grassroots barter and trade, which has swollen into today's market economy. Life in rural North Korea is still marked by far more hardship and scarcity than in its urban areas. Yet there is, surprisingly, a bustling, almost booming, feeling in much of the country. North Korean factories are putting a new priority on making more and better daily-life products. Managers, meanwhile, have more freedom to decide what to make, how much to pay workers and how to forge profitable partnerships.

Along the roads into virtually every city, street vendors, usually weather-beaten old women, sell fruits, vegetables and other food. In specialty shops, the latest "Pyongyang" model smartphones go for $200, with apps like the popular "Boy General" role-playing game at $2 a pop. Pyongyang's premier brewery, Taedonggang, just added an eighth kind of beer to its product line. Despite the ever-tightening sanctions, foreign products are still available. A can of Pokka coffee from Japan costs about 80 cents. Purchasing a Mercedes-Benz Viano might require some connections, but is doable -for a $63,000 sticker price. Some blatant manifestations of commercialism remain taboo. There are only three billboards in Pyongyang, a city of about 3 million, and no advertisements on television or in the newspapers. But stores are under instructions to be more consumer-friendly.

Stores commonly offer buy-two-get-one-free type sales. Posters for new medicines or sports drinks can be seen inside shops, and customers can sign up for "loyalty cards" to earn discounts.

"In today's North Korea there is a growing competition between the domestic companies themselves as they try to attract customers and establish reputable brands," said Michael Spavor, a Canadian entrepreneur who is one of the only Westerners to have ever met Kim Jong Un. Spavor calls it a "brilliant strategy." North Korea imports from China far more than it exports, particularly because of its energy needs. That imbalance widened dramatically this year as China cut back on buying from the North. The new U.N. sanctions will further squeeze the North's export income. The result could be shortages and inflation.

"This may represent the greatest near-term threat to the regime stability," Brown said.