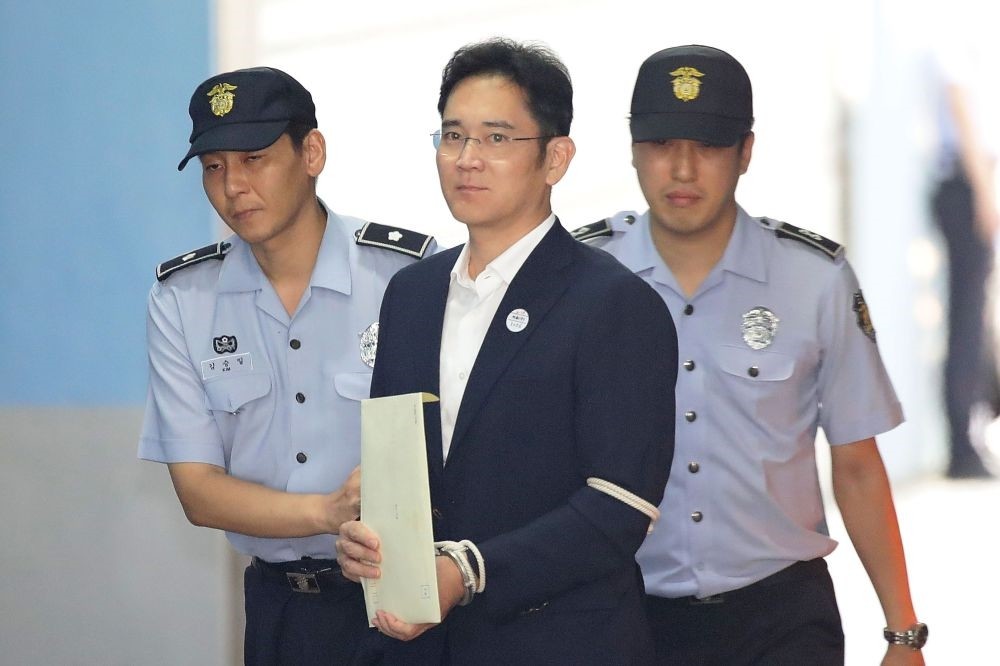 Samsung heir Lee Jae-Yong has spent his life trying to prove himself worthy of his father's legacy, and he followed in the older man's footsteps by being convicted of bribery in the same courtroom

A South Korean court sentenced Lee Jae-Yong, the billionaire chief of Samsung, to five years in prison for crimes that helped oust the country's president, a stunning downfall that could freeze up decision making at a global electronics powerhouse long run like a monarchy. Lee, 49, is vice chairman of Samsung Electronics, the world's largest smartphone maker and the flagship of the Samsung Group founded by his grandfather in 1938. Lee's father Lee Kun-Hee went on to build up the tech empire but was convicted of bribery in 1996.

The Seoul Central District Court also found him guilty of tax evasion and other charges nine years ago but suspended sentences meant he never served time in jail. Similarly, Lee's grandfather was engulfed in a huge case of smuggling by his fertiliser manufacturing company in 1966. He avoided being charged after "donating" the firm to the state. But on Friday it proved third time unlucky for the Lee dynasty, with the scion jailed for five years, convicted of bribing the then-South Korean president Park Geun-Hye and her secret confidante. Mild-mannered and often smiling inscrutably, bespectacled divorcee Lee Jae-Yong cuts a different figure from his father - a visionary but eccentric and reclusive leader who rarely made public appearances.

The senior Lee is credited with transforming a once-obscure electronics firm into a global powerhouse that today is the biggest maker of mobile phones as well as memory chips. But his son is not seen as having inherited his management prowess, with some critics instead ascribing him a "Minus touch" after several of his pet projects at Samsung fizzled out. The junior Lee earned a degree in Asian history at South Korea's top Seoul National University before studying business at Japan's elite Keio University and later Harvard. In 1998 he married the granddaughter of the founder of South Korean food giant Daesang. The couple had a daughter and son but divorced in 2009 and Lee remains single.

He started his career at Samsung Electronics in 1991 before a rapid climb up the corporate ladder - common among offspring of the founding families of the South's powerful, family-run conglomerates known as chaebols. He became an executive in 2001, a vice president in 2010 and a president less than a year later, when the firm was growing rapidly thanks to its burgeoning smartphone business. He was made vice chairman in 2012, a banner year when Samsung dethroned Apple as the world's top smartphone maker and shattered profit records every quarter. But the stellar performance was largely credited to his father and an elite coterie of Samsung veterans at the now-disbanded Future Strategy Office, which dictated key management decisions at the sprawling empire. Since a heart attack three years ago left his father bedridden, Lee has functioned as the public face of Samsung, attending key events and meetings with visiting luminaries. But how much he has contributed to Samsung's business decisions remains unclear. The Lee clan is known for its secrecy, with neither the scion nor his father ever having given a media interview. The Park scandal put Lee under an unprecedented level of public scrutiny, fumbling for words and being shouted at by lawmakers at a live-televised parliamentary hearing.

In court, Lee's lawyers and his co-accused, four other former Samsung executives, painted him as an inexperienced and overcautious heir who was sidelined by seasoned Samsung veterans handpicked by his father, in what was seen as a strategy to save him from legal responsibility. Lee himself told the court his knowledge of the group's overall operations was "limited", he was still "learning" from other executives and "simply following" their advice. Former senior executives consider Lee indecisive and detail-obsessed while lacking broader vision, according to Shim Jung-Taik, author of several books on Samsung, including a biography of Lee Kun-Hee.

But he told Agence France-Presse (AFP): "In this culture, everyone takes for granted that sons from the founding families take the 'throne' of top management regardless of their talent or achievements."