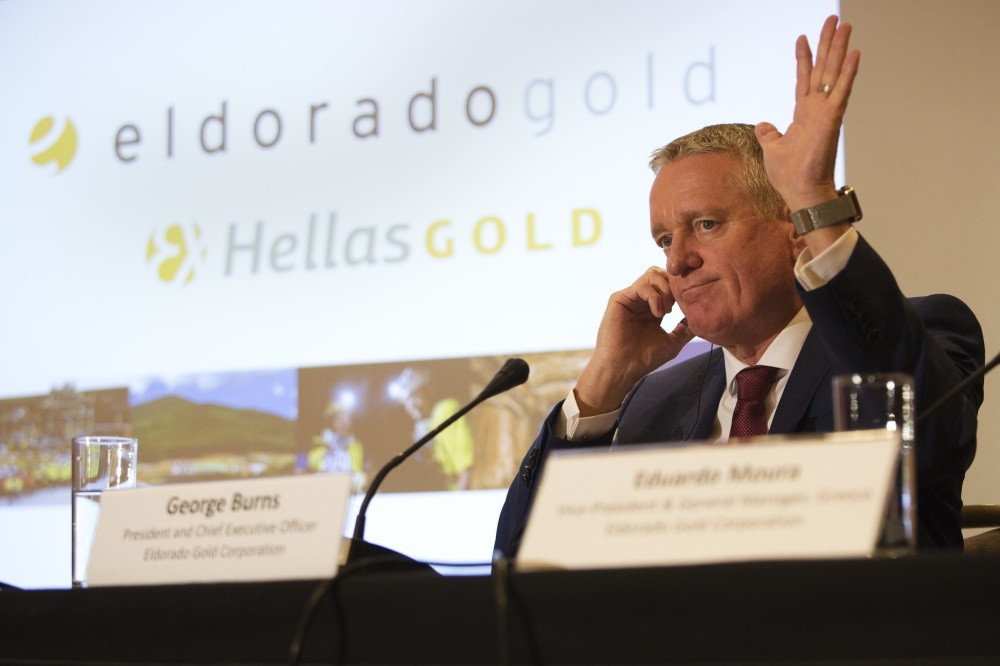 Eldorado President and CEO George Burns gestures during a news conference in Athens. Canadian mining company Eldorado Gold threatened to suspend a major investment in Greece in ten days, accusing the government of delaying permits and licenses.
by Sep 12, 2017 12:00 am

Canada's Eldorado Gold announced yesterday it would suspend investment in mining operations in Greece due to what it said were delays by the Greek government in issuing permits. Despite repeated attempts by the company and its Greek subsidiary to talk to the government, "delays continue in issuing routine permits and licenses for the construction and development of the Skouries and Olympias projects in Halkidiki, northern Greece," it said in a statement.

"Under the present conditions no additional investment will be made into the Kassandra Mines (Olympias, Skouries, Stratoni) in Halkidiki, the Perama Hill and Sapes projects in Thrace, and any exploration activity in the country."

"It is extremely unfortunate to find ourselves at this impasse when we should be advancing an important commercial project in partnership with Greece and adding another 1,200 jobs to our current workforce of approximately 2,400 people in Greece", said Eldorado Gold CEO George Burns.

The company said that it "would reassess its investment options in Greece upon approval and receipt of the required permits, coupled with a supportive government open to discussions."

Greek Energy Minister George Stathakis said late last month that the government would kick off an arbitration process over Eldorado Gold's mining plans in the north of the country by mid-September.

Environmentalists have said the Hellas Gold project, a subsidiary of Eldorado Gold, would cause irreversible harm, draining and contaminating local water reserves.

The goldmine on Skouries mountain has sparked years of protests, including a raid in 2013, when hooded militants threw Molotov cocktails at the mine worksite, wounding a guard and damaging equipment.

Greece's leftist government in 2015 blocked work on the goldmine over alleged contract violations.

The energy ministry had then said that the company had failed to provide an environment-friendly gold extraction plan within a three-year timeframe as promised, and had been given another year to deliver.

While in opposition, the now-ruling Syriza party publicly opposed the investment. However, many residents support the project.

"In 2016, direct foreign investments were the highest in the last 10 years and in 2017 further improvement is expected," he said while inaugurating the Thessaloniki International Fair.