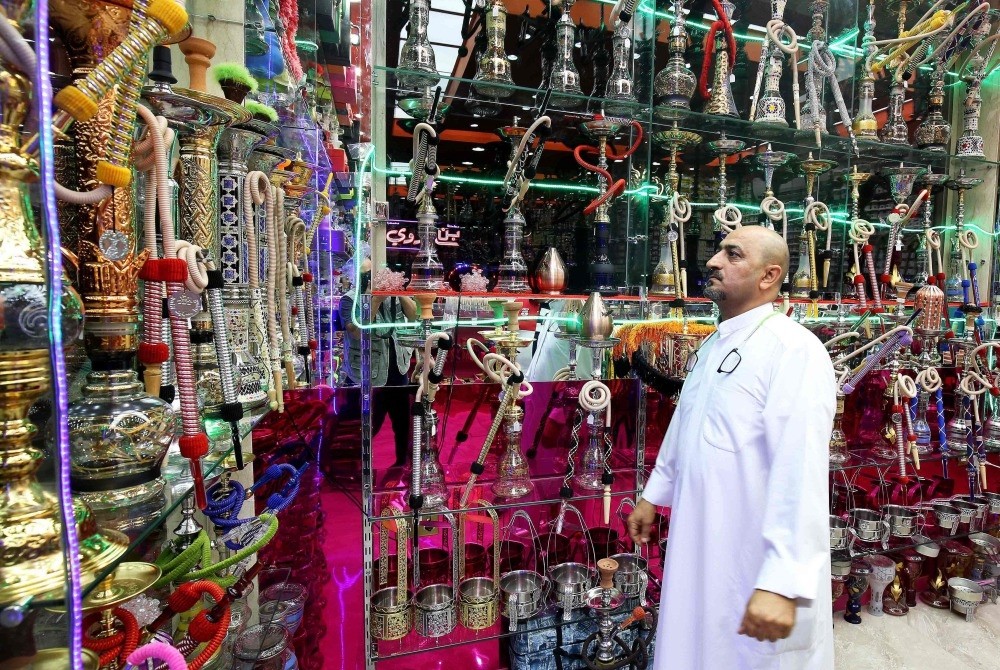 A man inspects water pipes at a shop in Kuwait City. The United Arab Emirates yesterday doubled the price of tobacco and increased soft drink prices by 50 percent, ahead of a more general tax on goods and services on Jan. 1 next year.
by Oct 02, 2017 12:00 am

The six states are now taking austerity measures a step further with the plan to introduce value-added tax, ending their decades-old reputation for being tax havens. The measure is expected to push prices in the region

Hard hit by a drop in oil income, energy-rich Gulf states will next year introduce value-added tax (VAT) to a region long known for being tax-free. Some have hailed introducing VAT as the start of "exciting, dramatic" change in the region, but the measure is also expected to push prices up for all residents including citizens and low-income workers. Yesterday, the United Arab Emirates (UAE) doubles the price of tobacco and increases soft drink prices by 50 percent, ahead of the more general VAT on goods and services from Jan. 1. The UAE is one of the six Gulf Cooperation Council (GCC) states to have agreed to introduce VAT at 5 percent next year as they seek to revitalize their economies. The UAE and Saudi Arabia have said they will implement VAT from Jan. 1, 2018, while the other GCC states of Bahrain, Kuwait, Oman, and Qatar are expected to follow suit during the year. Economies in the Gulf, home to the world's biggest exporters of oil and liquefied natural gas, took a major hit after a global supply glut triggered a drop in prices in 2014. Their balance sheets have remained in the red despite government austerity measures recommended by the International Monetary Fund (IMF), including freezing wages, benefits and state-funded projects, cutting subsidies and raising power and fuel prices. Governments across the region have also drawn hundreds of billions of dollars from their massive sovereign wealth resources in an attempt to curb the deficit. The six states are now taking austerity measures a step further with the plan to introduce VAT, ending their decades-old reputation for being tax havens. Accounting and consultancy firm Deloitte has said the progressive implementation of VAT from next year "marks the start of some of the most exciting, dramatic and far-reaching socio-economic changes in the region since the discovery of oil" more than half a century ago. But the move is expected to increase prices across the board including for nationals, who make up roughly half of the GCC's overall population of 50 million. Gulf nationals have for decades benefited from a generous cradle-to-grave welfare system and have largely been spared by austerity measures so far. VAT, a consumption tax imposed on goods and services, is generally paid by individual consumers to businesses, which then transfer the funds to tax authorities."Citizens won't be happy about the price hikes from the VAT. I don't think it will be acceptable as it will affect people's budgets," said Khaled Mohammed, a Saudi working in Dubai's property sector. The IMF has insisted the introduction of VAT will not drive away millions of expatriates until now lured by a tax-free environment. But the future looks daunting for the region's tens of thousands of low-income workers.

"It's going to be tough for all those who draw small salaries," said Rezwan Sheikh, an Indian restaurant worker in Dubai.

"We're already struggling with finances. How much are we going to save after the VAT?" asked Sheikh, who sends most of his salary home to his parents and pregnant wife. Saudi Arabia and the UAE alone make up 75 percent of the GCC's $1.4-trillion economy and are home to 80 percent of the Gulf population, citizens, and expatriates. Under the agreement between GCC states, some goods and services will be exempt from the tax. Bryan Plamondon of the U.S.-based IHS Markit Economics says food, education, and healthcare, as well as renewable energy, water, transportation, and technology, are likely to receive preferential treatment. He estimates that VAT will raise between $7 billion and $21 billion annually or between 0.5 percent and 1.5 percent of GDP. The IMF put that has put that figure at around 2 percent.