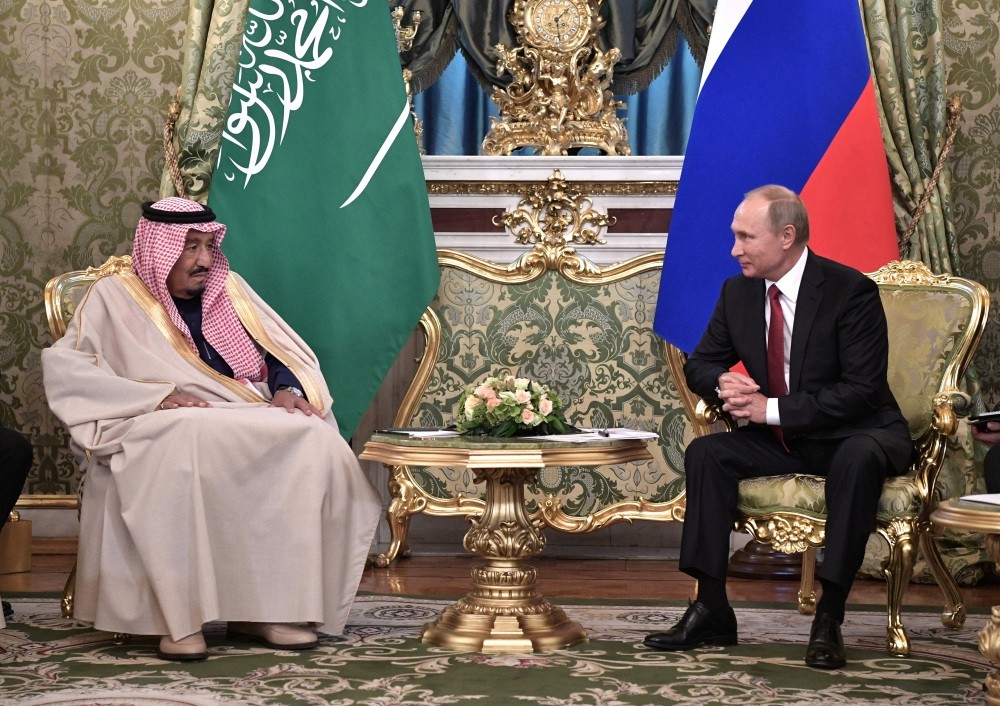 During a landmark visit to Russia, Saudi Arabia's King Salman and President Vladimir Putin met to clinch a host of multi-billion-dollar energy deals despite discord over the Syrian war

Russian President Vladimir Putin hosted Saudi Arabia's King Salman for talks in Moscow on Thursday in the first official visit of a Saudi monarch to Russia that was expected to focus on oil and the war in Syria.

At the Kremlin's St. Andrew's Hall, Putin in televised remarks hailed the king's visit as a "landmark" event. Salman in his reply called Russia a "friendly nation" and said his country is committed to strengthen ties "in the interests of peace and security."

Relations between the two countries have often been strained. During Cold War times, the Saudis helped arm Afghan rebels fighting against the Soviet invasion.

The kingdom, much like Russia, has been hit by the fall in oil prices since mid-2014. Despite regional disagreements, the two major oil-producing nations found common ground on energy policy in November, when they led a deal between OPEC and non-OPEC states to cut production in a bid to shore up crude prices. So far that deal is holding and prices have recovered slightly to above $50 a barrel.

In an apparent reference to the output deal, Salman told Putin that Saudi Arabia is "eager to continue the positive cooperation between our nations in the world oil market, which fosters global economic growth."

Saudi Arabia's Public Investment Fund, the kingdom's sovereign wealth fund, announced in 2015 plans to invest $10 billion in Russia over the next five years, though only a fraction of that has so far been put up.

The Saudis have also been eyeing Russian nuclear power technologies and appear ready to expand food imports from Russia, which is set to remain the world's biggest wheat exporter this year. Food security is a major concern for Saudi Arabia, which stopped local production of livestock feed and wheat due to water scarcity.

Analysts say Salman's trip to Moscow is the clearest sign yet that Russia's strategy in the Middle East, including its high-risk show of military power in Syria, has paid off.

Salman's visit caps off a number of visits to Russia over the past two years by Gulf royals, including by his heir and son.

"A number of Gulf leaders have been going with greater regularity to Moscow and I think for a simple reason: Russia has made itself much more of a factor in key parts of the Middle East as the U.S. has taken a step back in some ways, particularly in Syria," said Brian Katulis, a senior fellow at the Center for American Progress.

The Saudi monarch's visit comes after decades of strained relations. More recently, tensions were high over the war in Syria. Russia and Iran have staunchly backed Syrian President Assad while Saudi Arabia has supported the Sunni rebels fighting to oust him.

However, relations have begun to improve in recent years and Salman's heir, Crown Prince Mohammed bin Salman, has held several meetings with Putin.

Salman said at the talks in Moscow that Saudi Arabia calls for a political solution in Syria that "guarantees security and stability and the preservation of Syrian sovereignty."

Anna Borshchevskaya, a fellow at The Washington Institute for Near East Policy, says Russia has no capacity to replace the United States as Saudi Arabia's key ally.

"That said, it's clear that Russia has been able to play a weak hand very well and step into vacuums everywhere where the U.S. has treated," he said.

Moreover, Officials from Russia and Saudi Arabia are reported to have signed an agreement in the Kremlin on the creation of a $1 billion joint investment fund.