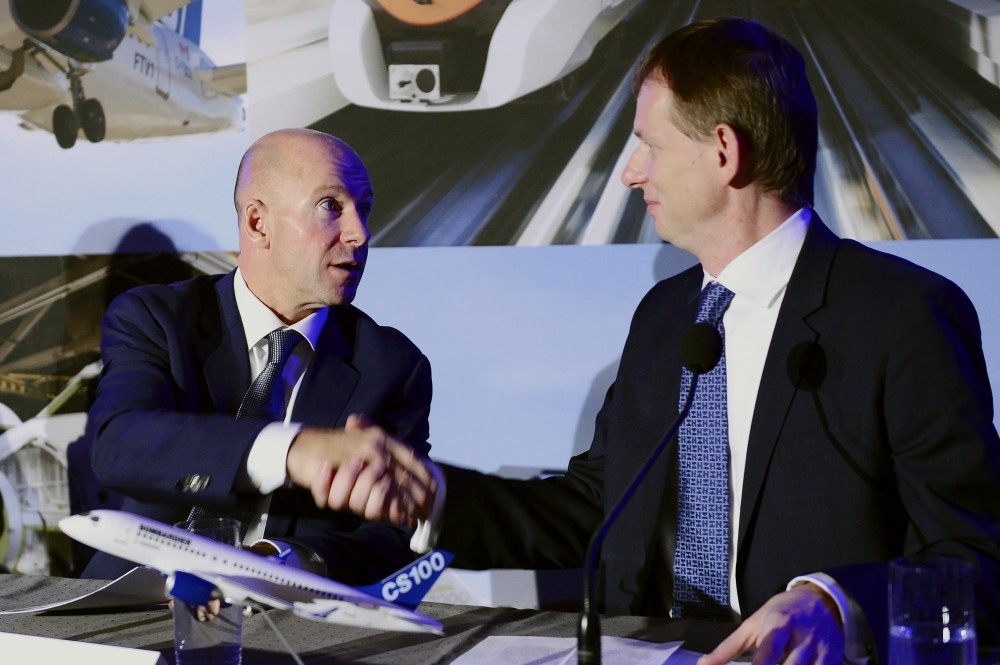 Bombardier CEO Alain Bellemare (L), and president Canada and COO of North America for Airbus Helicopters Romain Trapp shake hands during a press conference in Montreal on Monday.
by Oct 18, 2017 12:00 am

Airbus SE has agreed to buy a majority stake in Bombardier Inc's CSeries jetliner program, giving a powerful boost to the Canadian plane and train maker in its costly trade dispute with Boeing Co. The deal, which would come at no cost for Europe's largest aerospace group, would give Airbus a 50.01 percent interest in CSeries Aircraft Limited Partnership (CSALP), which manufactures and sells the jets, the companies said.

While Bombardier will lose control of a plane program developed at a cost of $6 billion, it gives the CSeries improved economies of scale, a better sales network and, crucially, could change the power balance in the trade dispute with Boeing. The 110-to-130 seat plane, which has not secured a new order in 18 months and is being threatened by a possible 300 percent duty on U.S. imports, would be built for U.S. airlines at Airbus's Alabama assembly plant, circumventing any import penalties in a move that apparently caught Boeing off guard. Bombardier said the partnership should more than double the value of the CSeries program.

"Bombardier no longer has control of this jet, but then again, it's better to have a 30 percent share of a very successful program than to struggle with a highly risky program that was perhaps too big for them from the start," said aerospace analyst Richard Aboulafia.

Canadian Innovation Minister Navdeep Bains, who must decide whether to approve the deal, said in a statement that "on the surface, Bombardier's new proposed partnership ... would help position the CSeries for success".

Boeing - which is also locked in a separate 13-year trade dispute with Airbus - said it was a "questionable deal" between two of its subsidized competitors. Airbus Chief Executive Tom Enders said the company, based in Toulouse, France, had offered to assemble some of the narrowbody jets at its U.S. plant in Alabama for orders by U.S. carriers. The U.S. assembly line would mean the jets would not be subject to possible U.S. anti-subsidy and anti-dumping duties of 300 percent, Bombardier Chief Executive Alain Bellemare said on a media conference call. Bellemare called the deal with Airbus, which was first attempted unsuccessfully in 2015, a "strategic" decision that is expected to close in the second half of 2018.

"We're doing this deal here not because of this Boeing petition. We are doing this deal because it is the right strategic move for Bombardier," Bellemare said, referring to Boeing's complaint that the Canadian firm received illegal subsidies and dumped CSeries planes at "absurdly low" prices. A Boeing spokesman dismissed the agreement as a "questionable deal between two state-subsidized competitors" to try to skirt a recent U.S. trade finding against the CSeries.

In February, the Canadian government announced C$372.5 million ($297 million) in repayable loans for the CSeries and another Bombardier jet program. The Airbus investment does not place any more financial burdens on Ottawa, two sources close to the case said on Monday.