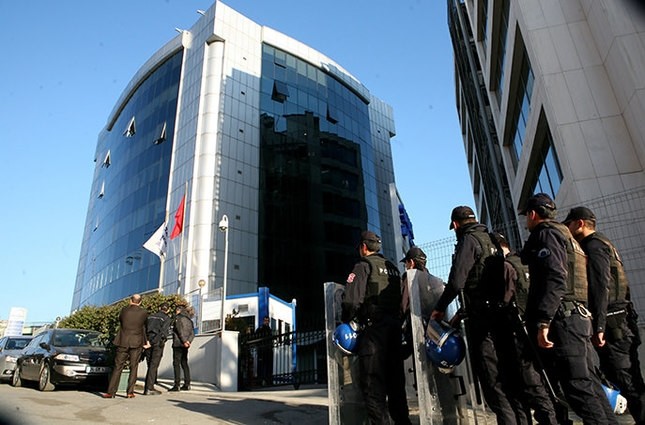 Authorities on Friday launched nationwide operations to arrest 140 suspects including former staff of Kaynak Holding, a business conglomerate believed to be main financier of the Gülenist Terror Group (FETÖ).

Some suspects were accused of using the ByLock smartphone messaging app, an encrypted software used by FETÖ members before and during a deadly coup attempt in 2016 for which the group is blamed. The app was cracked by Turkish security agencies, allowing them to identify tens of thousands of FETÖ supporters.

The Anadolu Chief Public Prosecutor's office in Istanbul said in a statement that they issued an arrest warrant for 102 suspects under an investigation against Kaynak Holding.

Following the warrant, the security forces launched an operation in 24 provinces and detained 59 suspects so far.

Kaynak Holding owns 23 companies in the media, education, tourism and logistics sectors. Trustees were appointed to Kaynak Holding's companies in 2015 and it was also the subject of a tax investigation the year before.

Kemal Batmaz, the executive of a company in the conglomerate, is accused of being one of the instigators of the coup attempt. Batmaz was arrested near a military base at the heart of the insurrection in the capital Ankara.

Another arrest warrant was issued by the Ankara Chief Public Prosecutor's office against 38 employees of FETÖ-linked schools and coaching centers, which were closed by government decrees following the defeated coup. Ankara police also launched an operation in seven provinces and arrested some of the suspects. Operations were still underway as of Friday to arrest the remaining suspects, according to the sources.

Meanwhile, the Ankara Public Prosecutor's office sent a summary of proceedings to the Supreme Court of Appeals against five former members of the Council of Judges and Prosecutors. The prosecutors requested the court to open trial against alleged senior FETÖ members: Kerim Tosun, Mustafa Kemal Özçelik, Şaban Işık, Mahmut Şen and Ahmet Berberoğlu. Up to 22 years and six months of jail terms were also demanded for the suspects.

FETÖ and its U.S.-based leader Fetullah Gülen are accused of orchestrating the defeated coup attempt of July 15, 2016, which left 249 people dead and nearly 2,200 injured. Ankara accuses FETÖ of being behind a long-running campaign to overthrow the state through the infiltration of Turkish institutions, particularly the military, police and judiciary.

Thousands were arrested after the putsch attempt and their trials began late last year.

A large number of FETÖ suspects and those actively involved in the coup attempt are believed to have fled abroad when the strong public resistance helped the defeat of the putsch bid. A Dutch news agency ANP report quoted by the media on Friday said the Netherlands granted asylum to the first Turks who applied for asylum after the coup attempt. Speaking to ANP, Wil Eikelboom, an asylum lawyer, said eight "Gülen supporters" were granted asylum in the country. Asylum applications to the Netherlands spiked after the coup attempt and although their identities are not revealed, most are believed to be those linked to the terrorist group.