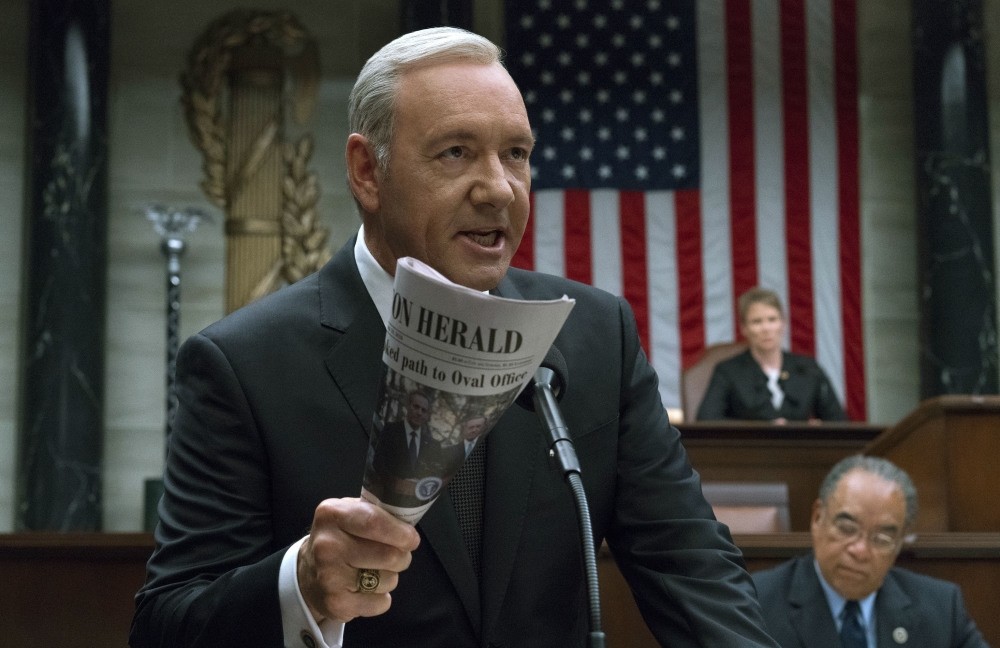 This image released by Netflix shows Kevin Spacey in a scene from ,House Of Cards., Netflix says it is suspending production of ,House of Cards, following harassment allegations against Spacey.
by reuters
Nov 08, 2017 12:00 am

Sony Pictures withdrew a movie starring Kevin Spacey from a Los Angeles film festival following sexual misconduct allegations against the actor, but said it was going ahead with a planned U.S. movie theater release in December.

"All the Money in the World," about the 1973 kidnapping of teenager John Paul Getty III, features Spacey as his grandfather, the late U.S. oil billionaire Jean Paul Getty. The film was due to have a red carpet world premiere at the American Film Institute's (AFI) annual festival in Los Angeles on Nov. 16.

"Given the current allegations surrounding one of its actors and out of respect for those impacted, it would be inappropriate to celebrate at a gala at this difficult time. Accordingly, the film will be withdrawn," Sony's TriStar Pictures unit said in an emailed statement. The Sony statement said there were 800 other actors, writers and crew members involved in the movie, and the film would open wide as planned on Dec. 22. Spacey apologized last month to actor Anthony Rapp, who accused him of trying to seduce him in 1986 when Rapp was 14. Spacey's representatives later said he was seeking unspecified treatment.

CNN reported last week that eight current and former employees of the Netflix TV show "House of Cards," who were not identified, alleged sexual misconduct against Spacey, the TV show's star. AFI said in a statement that it supported Sony's decision. Netflix said on Friday that it had severed ties with Spacey because of the allegations. It said it would not be involved in further production of "House of Cards" with Spacey. Producer Media Rights Capital said Spacey had been suspended from the political show. Netflix also said it would not release the film "Gore," in which Spacey plays the late U.S. writer Gore Vidal.