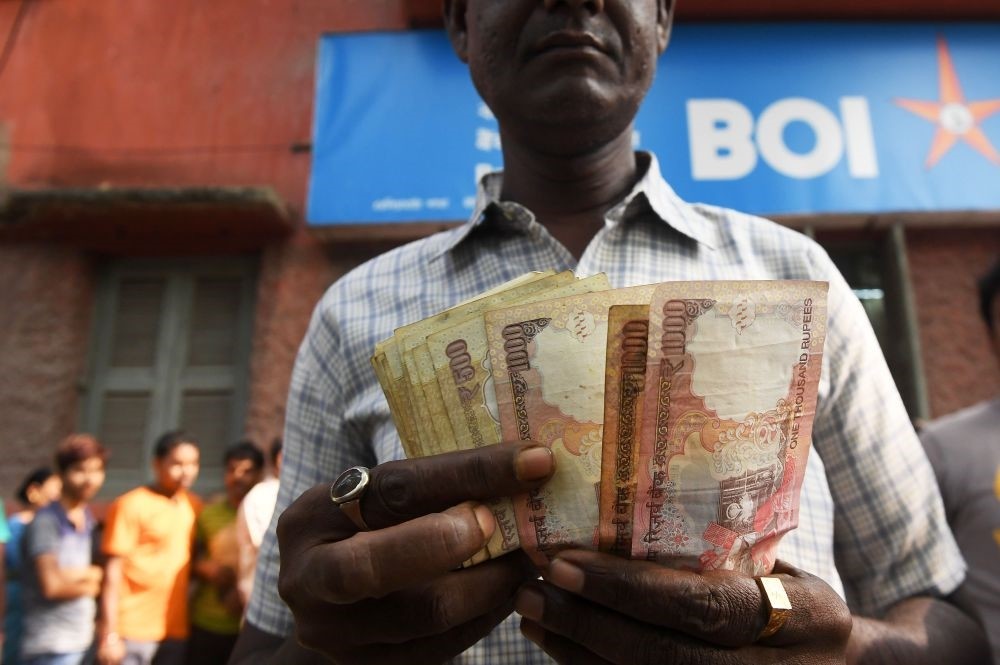 An Indian bank customer counts old rupee notes as he waits outside a bank to deposit and exchange them in Kolkata, last year.
by French Press Agency - AFP
Nov 09, 2017 12:00 am

When India declared most bank notes unusable a year ago in an effort to flush out tax cheats, one steel manufacturer was so spooked he resolved to do business by the book in the future. But 12 months on from the shock move, the industrialist says he has gone back to cash under the table at the insistence of his buyers, undermining government claims that the bold scheme has cleaned up India's graft-ridden economy.

Prime Minister Narendra Modi's decision last November to withdraw India's high-value rupee bills was intended to root out a culture of tax evasion so widespread it had become the norm. His Bharatiya Janata Party (BJP) had won the 2014 election on a promise to root out corruption, which had led to popular disillusionment with the previous government. But the move wrought havoc on businesses in Asia's third-largest economy, causing growth to slump to levels not seen since Modi was elected.

Now, as businesses from street side stalls to wholesalers rekindle their love affair with cash, Modi is coming under pressure to explain whether the most controversial policy of his tenure was worth the economic pain. The steel producer, who spoke on condition of anonymity, said his efforts to keep business above board backfired when his buyers insisted on paying cash and keeping their payments off the books.

"They said, we have cash at home, and if you want to be paid, we can pay you in cash immediately, but we cannot arrange a bank payment," he told Agence France-Presse (AFP).

The government had hoped the surprise move, which meant high-value notes could not be spent and instead had to be deposited in banks, would encourage a switch to traceable digital payments in a country where only 3 percent had been paying taxes.

Modi personally championed credit and debit cards in the aftermath of demonetization, beaming down from billboards encouraging Indians to embark on a digital revolution. But sales from plastic have declined 13 percent from highs in December 2016, when new cash notes remained scarce. Mobile banking figures for August, the latest data available, showed $16 billion in transactions , a 20 percent drop compared with November.

Sanjay Moria, a tea vendor in central Delhi, said at least half his income in the weeks after demonetization came through a popular payment app, but since then, digital sales had plunged.

"I'll take any form of payment, but people are mostly back to paying in cash," he said, as office workers sipped hot spiced tea from small paper cups. Many poorer Indians, reliant on cash, were left scrambling to buy basic necessities as their meagre savings evaporated in an instant. "Was it worth it? Certainly not," said Sunil Sinha, principal economist at India Ratings & Research. "It brought huge pain and disruption. People lost lives, lost their livelihoods."