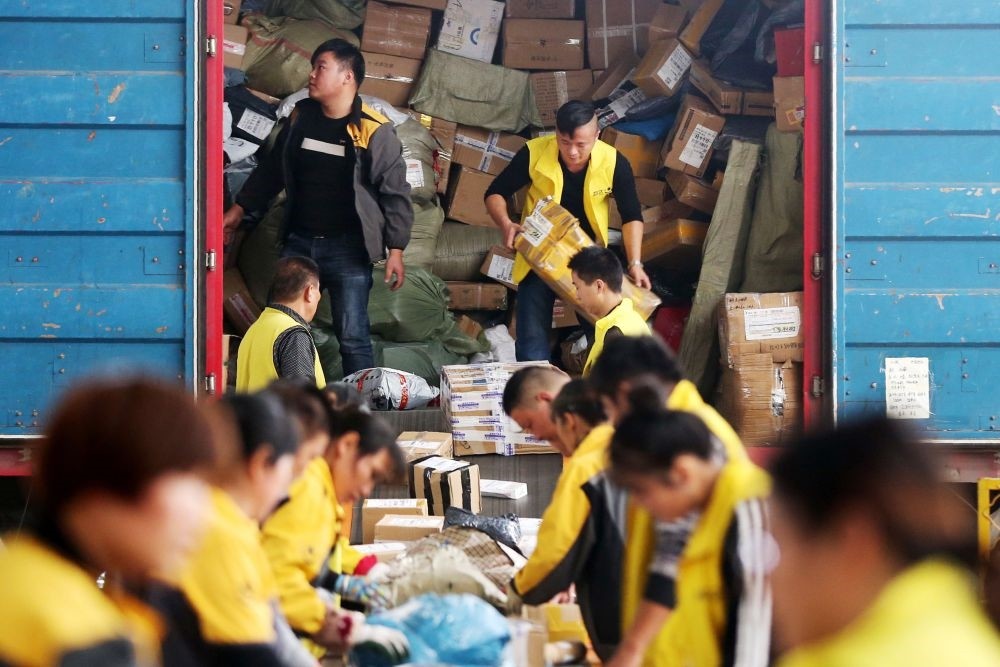 Employees sort packages ahead of Singles Day in Huaibei, China's eastern Anhui province.
by Nov 11, 2017 12:00 am

Top delivery firms have begun testing robots and automated sorting lines ahead of Singles Day, an annual online discount shopping extravaganza which could see 1.5 billion packages shipped around the country

At Beijing's sprawling Renmin University of China, two shiny new couriers dart through throngs of students to deliver packages throughout the day. But they're not typical Chinese deliverymen. Bright red, grey and black, they are the robot postmen of the future, and are controlled from a command centre 40 kms (25 miles) away by e-commerce giant JD.com. The robots are among technologies revolutionising China's vast delivery industry, which is struggling to keep pace with 50 percent annual growth in package volumes amid staff shortages, tight competition and declining margins. China's top delivery firms such as S.F. Express, BEST Inc and ZTO Express have begun testing robots and automated sorting lines ahead of China's Singles Day on Saturday - an annual online discount shopping extravaganza which could see 1.5 billion packages shipped around the country.

"Wages are going up and the technology cost is actually going down," said Bao Yan, director of strategy at JD Logistics, which manages parent JD.com's logistics network. "We own the full process... we want to have automation throughout, from the fulfillment center to transportation and for last-mile delivery."

To be sure, the robot revolution isn't unique to China. U.S. online retailer Amazon has staffed warehouses with thousands of robots since 2014, helping cut operating costs and delivery times. However, Chinese industry executives say they are leapfrogging Amazon as they make use of and develop these technologies at a faster pace, with many investing proceeds from stock market listings last year.

The experiments taking place across China are wide-ranging. BEST, and Kaola, an e-commerce unit of video games publisher NetEase Inc, are using robots that can shift goods weighing up to 1,000 kgs (1 tonne) across warehouse floors to help human packers. Online retailers Alibaba, JD.com and S.F. Express are investing in drone programs they hope will one day perform so-called last-mile deliveries, especially in hard to reach rural areas. Others, like ZTO Express, have rolled out automated sorting lines that can self-scan and tip packages into bags earmarked for different destinations lined up on either side of the belt. ZTO'S Chief Financial Officer James Guo said automated lines, which cost about 4 million yuan ($602,419) apiece, can sort up to 25,000 packages an hour with 40 workers, versus a manually-operated line that can sort 4,000 packages with 120 workers. ZTO has 44 of these automated lines.

"By saving the annual salaries of 70-80 workers, I can easily get back my investment in one line," Guo said. Other executives said wages in the industry, which has about 3 million workers, were rising by double-digit percentages annually, outpacing China's economic growth.

The shift is rippling down through the broader industry, logistics suppliers say, driving orders for and research into new technologies and placing new demands on warehouse landlords.

At one end of the chain are robotics and technology firms such as Qingdao Kengic Automation Equipment Co Ltd and Hikvision , which say they are partnering with logistics companies to develop new systems. China's government has been both boon and bane to the speed of the shift, other executives said. Beijing has encouraged the fragmented logistics industry to modernise and become more efficient. The "Made in China 2025" initiative to upgrade the country's manufacturing base has also spurred growth in robots. But the government maintains tight control of its airspace, holding back the widespread introduction of drones, which many firms see as a potential last-mile delivery solution. Few firms have been granted drone licenses by the aviation regulator. Still, industry executives confidently predict more parts of the supply chain will see machines replace human workers.