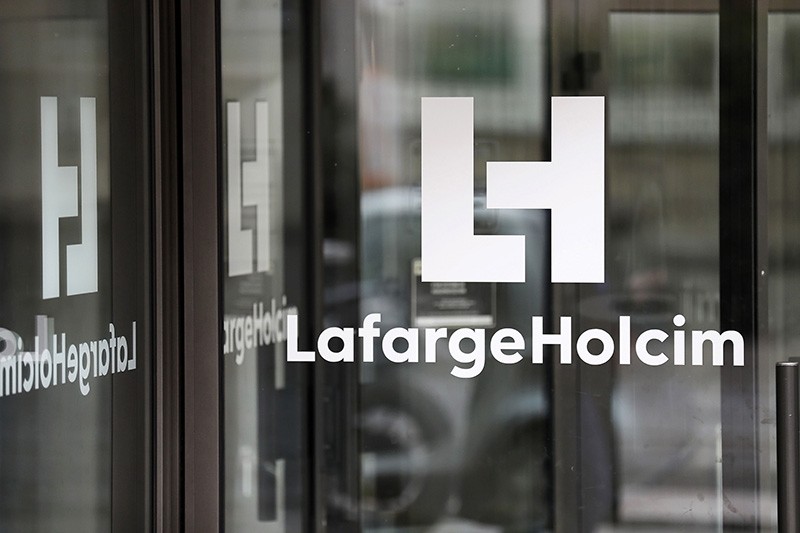 This file photo taken on March 9, 2017 in Paris shows a logo at an entrance of the French headquarters of LafargeHolcim, a group created in 2015 by the merger of French cement manufacturer Lafarge and its Swiss counterpart Holcim. (AFP Photo)
by Compiled from Wire Services Dec 01, 2017 12:00 am

Three top officials of Swiss-French cement-maker Lafarge were charged Friday with indirectly financing terrorists through the company's activities in war-torn Syria, one of their lawyers and judicial sources said.

Lafarge stands accused of paying the Daesh terror group and other militants through a middleman in order to allow the company's factory in Jalabiya, northern Syria, to continue to operate.

The company is also suspected of using fake consulting contracts to buy fuel from Daesh, which took control of most of Syria's strategic oil reserves in June 2013.

The three, who were all Lafarge managers at the time, are facing potential charges including financing a terrorist organization and placing the lives of other people at risk, the source said.

Frederic Jolibois, who took over as manager of the factory in 2014, was charged with financing terrorism and violating an EU embargo on Syrian oil, his lawyer Jean Reinhart said.

Bruno Pescheux, Jolibois' predecessor as factory chief between 2008 and 2014, and Lafarge security boss Jean-Claude Veillard were also charged for financing terrorism as well as "endangering others' lives".

Jolibois has admitted to buying oil from "non-governmental organizations" in violation of the EU embargo declared in 2011.

Pescheux has meanwhile admitted Lafarge paid up to $100,000 (84,000 euros) a month to Syrian tycoon Firas Tlass, a former minority shareholder who gave cash to armed factions in order to keep the factory open.

Daesh would have received around $20,000, Pescheux estimated.

Human rights and business ethics activists, as well as former Syrian Lafarge employees, have filed a lawsuit in France over the company's alleged deal with Daesh.

The company has not confirmed that Daesh was one of the groups in question, but it and other terrorist groups operated in the area near the plant, which was evacuated in September 2014.

Lafarge chief executive Eric Olsen resigned in April, saying that he believed his departure would "contribute to bringing back serenity" to the company.

The Lafarge board said that Olsen was not responsible for, nor thought to be aware of, any wrongdoings it had identified.