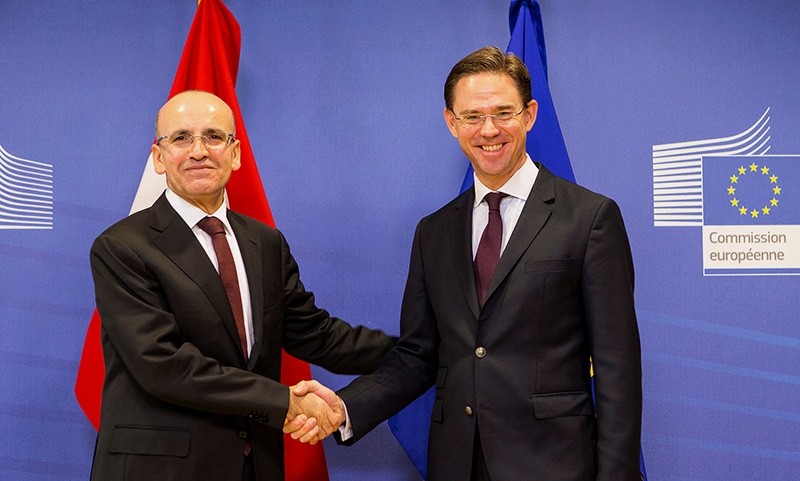 During a press conference with Deputy Prime Minister Mehmet Şimşek, Katainen said they held the second of the EU-Turkey High Level Economic Dialogue meetings, stressing the strategic importance of these meetings for both Turkey and the EU.

Indicating that Turkish-EU relations need further improvement, Katainen said: "The EU wants to see Turkey as a strong partner with stable growth, a country that has respect for fundamental values such as the rule of law and as a strong partner in which it can work together in international trials."

Katainen said that the EU would like to advance its trade relations with Turkey, indicating the increased commercial relations between the two parties would increase employment and would be beneficial to everyone.

The EU-Turkey High Level Economic Dialogue meeting provides a great platform for strategic discussions, Katainen said. "Through this meeting, we would like to expand bilateral and mutual understanding and create a proactive agenda for the many dimensions that shape Turkey-EU cooperation."

Katainen said that the commission consulted with Turkish and EU businesspeople and that "both sides have expressed their wishes for the modernization of the customs union and the enactment of visa liberalization."

He noted that Turkish-EU relations have recently undergone a tumultuous process, and therefore, the commission has not been authorized to update the agreement.

Katainen said that the process to revitalize the modernization of the customs union can be re-launched. "The customs union is not a gift to Turkey from the EU. It benefits both Turkey and the EU. It facilitates trade and free movement of goods and creates jobs."

The existing problems between Turkey and the EU are more political and must be resolved by political decision makers, so both parties must build a future-oriented agenda, he said.

In its Dec. 21, 2016 assessment, the commission proposed the modernization of the current deal, which covers a limited range of industrial products and excludes agriculture, public procurement and services. Explaining that the upgrade of Turkey-EU trade relations forms an essential part of both side's efforts to deepen relations in key areas of common interest, the commission reiterated its resolution to continue delivering on commitments it has made as part of the deal with Ankara.

Deputy Prime Minister Mehmet Şimşek said Friday that Turkey wants to update the customs unions agreement it has with the European Union because of the competiveness of Turkish companies.

"An update of the customs unions agreement between the EU and Turkey is in everyone's interest," Şimşek, who is responsible for the country's economic affairs, said during the EU-Turkey High-level Economic Dialogue organized by the European Policy Center in Brussels.

He said accession to the EU is an indispensable target for Turkey.

"A prosperous and stable Turkey is in the interest of Europe," he added.

The minister called for a new trade agreement that will liberalize all services sectors and public procurement with the EU. He said his country's economy is converging with the EU.

vironments are priorities for reform," he said.

"We are deeply committed to making reforms despite the challenges we have been facing. Turkey is faced by a terrorist threat. The state of emergency was not a political move but a necessary tool in hard times," the minister added.

Şimşek said some people in the continent talk about a regressive Turkey without taking into account "the challenges of the defeated coup," "terrorism" and "instability" in the region.

"We expect more support and empathy from Europe, less ambiguity and negative attitude. Turkey will make it to achieve real convergence with the EU," he said.

Turkey is the only country that has had a customs union agreement with the EU, in effect since 1996. It has been one of the largest trade partners of the EU, with an export value of 66.7 billion euros and an import value of 78 billion euros in 2016 in goods alone. As for services, Turkish exports to the EU totaled 16.4 billion euros and imports of services stood at 12.2 billion euros, according to commission data. Among EU states, Germany has been the top destination for Turkish goods for a while. July export data shows that Germany was the top market for Turkish exports in eight sectors, including automotive, ready-to-wear, iron, machinery, air conditioning, hazelnuts, fresh fruit, vegetables and dried fruit.