Climate change cases against firms to make legal splash in 2018 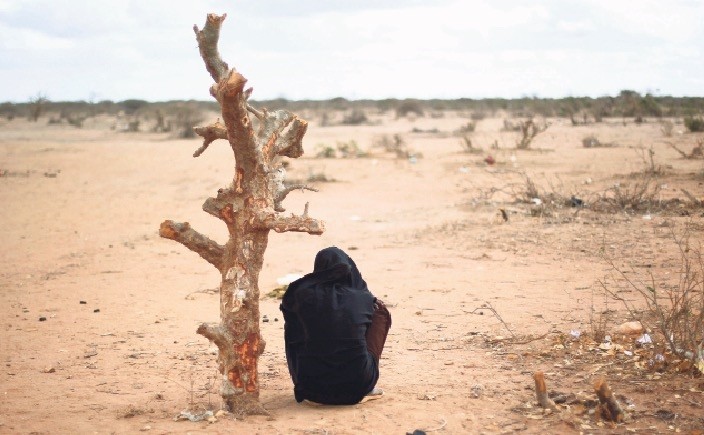 A pregnant Somali woman sits by a tree trunk at the UNHCRu2019s Ifo Extension camp, eastern Kenya. Scientists say climate change could dramatically increase the number of people seeking asylum in Europe.
by Jan 02, 2018 12:00 am

A clutch of high-profile legal cases over responsibility for the effects of climate change will be fought out in courtrooms next year as claims stack up against both governments and some of the world's biggest oil and energy companies. Lawsuits in the United States brought by young activists and several Californian cities are most likely to make waves, but legal action by a Peruvian farmer in Germany and Greenpeace in Norway could also cause ripples, said lawyers and academics.

"There is a trend towards more litigation around climate change, and probably the lack of political action in the United States may increase that trend," said Sophie Marjanac, a London-based lawyer at non-profit environmental law group ClientEarth.

"Where there's an abdication of leadership on climate action, I think the courts will have a greater role to play," she told the Thomson Reuters Foundation. Lawyers and campaigners are closely watching the looming legal battles they say could set the stage for fresh claims against major oil and industrial companies, and pressure governments to ramp up action on climate change. With U.S. President Donald Trump and his cabinet members named as defendants, the Juliana v. United States case brought by 21 young activists from Oregon is set to be one of the most closely followed in 2018. In the federal case, scheduled for trial in February, the plaintiffs hope to establish that the government's climate change policies have failed to protect their constitutional right to live in a habitable environment. The case remains locked in legal limbo, however, as the government tries to block it from proceeding. Lawyers and academics say Juliana builds on the groundbreaking Urgenda case brought by hundreds of Dutch citizens in 2015, which saw the government ordered by a district court to accelerate reductions of greenhouse gas emissions. However, that outcome is now being appealed, with a decision likely early next year.

Elsewhere, a January judgment is expected in a case brought by Greenpeace Nordic and environmental group Nature and Youth against Norway, which they claim has breached its pledge to combat climate change by granting oil and gas exploration rights.

Some lawyers and researchers say claims seeking specific damages from energy and industrial companies for actions that may have contributed to climate change could have a bigger impact than constitutional cases. A successful ruling against a heavyweight corporate could potentially unleash a wave of similar claims, say case watchers, who reference long-running fights against tobacco, asbestos and pesticide manufacturers over harm to human health. At least seven Californian cities and counties have brought lawsuits against major fossil fuel companies. San Francisco and Oakland are seeking billions of dollars to help protect against rising sea levels they blame on climate change.

Tracy Hester, a lecturer at the University of Houston Law Center, said such claims could "redefine the rules of the game". "They're essentially not trying to bring a global claim that's going to lock up all these issues in one court... they're different in that they're seeking damages," he said. Trump's move to pull out of the Paris climate change accord and roll back environmental regulations means campaigners are increasingly resorting to litigation, as they did under former President George W. Bush, said case watchers.

While climate-related suits are not new, scientific advances could bolster plaintiffs as they try to pin responsibility for climate change on particular polluters. A German court has agreed to hear evidence in a case brought by Peruvian farmer Saul Luciano Lliuya against RWE AG, asking the power giant to pay to reinforce a lake above his village dangerously swollen by glacial melt he says is caused by global warming the company contributed to. Yet while there has been a steady rise in cases seeking to hold corporations and governments to account, few make it to court and legal action is largely limited to richer countries.