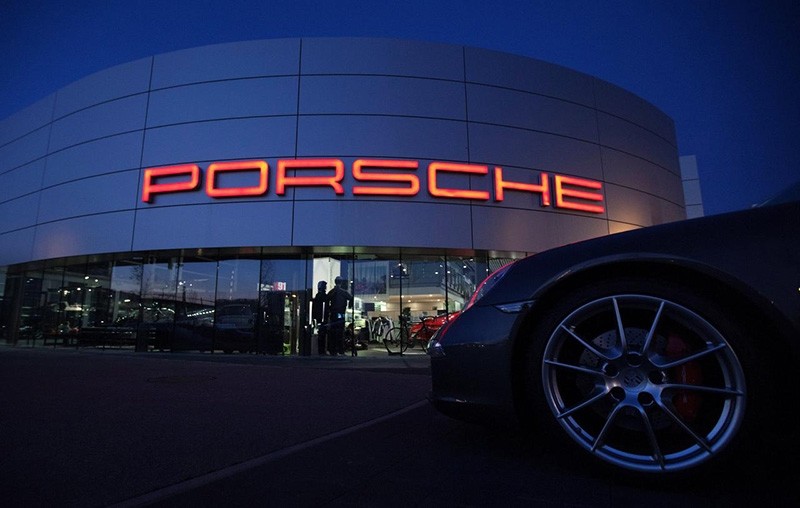 An illuminated Porsche logo is pictured on a building of a Porsche retail centre in Niederwangen, Switzerland, March 9, 2012. (Reuters Photo)
by Compiled from Wire Services Jan 03, 2018 12:00 am

Tensions rose between unions and employers in the Germany's key metalworking sector Wednesday, as the two sides prepare for a showdown over pay and conditions beginning next week.

The IG Metall union -- which represents 3.9 million workers in the metalworking and electrical sectors -- is planning to stage a series of warning strikes next Monday to ratchet up the pressure on employers.

Germany's biggest union also called on its members at luxury sports carmaker Porsche to down tools on Thursday as the union steps up its national campaign for a hefty 6-per-cent wage hike combined with a cut in working hours.

The engineering union, which represents workers in some of the nation's major companies - such as Daimler, Siemens and Thyssen-Krupp - said it expects about 1,000 workers from Porsche's Stuttgart headquarters to attend a rally Thursday in the south-western city.

In addition to the pay rise, IG Metall's plan also includes an optional cut in weekly working hours to 28 from 35.

The union's wage demand comes as the Germany economy turned in a robust performance amid falling unemployment and a surge in job vacancies in the nation.

IG Metall's call for Porsche workers to strike points to a volatile year for labor relations in Germany as workers demand a greater share of the nation's current economic prosperity.

The other walkouts planned for Monday -- limited to a number of hours -- are part of the traditional sabre-rattling that accompanies the negotiations which, given the economic importance of the sector and the size of the union, act as a benchmark for many other sectors and set the tone for labor relations nationwide.

IG Metall's north German division will call for "several hours of walkouts at more than 140 firms" between Monday and the next round of talks with employers on January 18, the union said in a statement.

It will hold demonstrations in the states of Mecklenburg-Western Pomerania, Schleswig-Holstein, Lower Saxony and the city-states of Bremen and Hamburg.

"We want to know from the employers where we are by the end of January," IG Metall regional chief Meinhard Geiken said.

If bosses refuse to budge, further strikes including 24-hour walkouts will follow, he warned.

Employers are especially resistant to the idea of allowing workers to switch to part-time hours with only limited impact on wages.

Gesamtmetall employers' federation director, Oliver Zander, told news agency DPA the demand would be "unfair and discriminatory" against those who have previously moved to part-time work under less generous conditions.

The demand was also "illegal", he argued.

Company bosses presented a legal opinion seen by DPA Wednesday, which they believe shows that the strikes themselves would also be against the law.

IG Metall believes its part-time work demands and the strikes are legal.