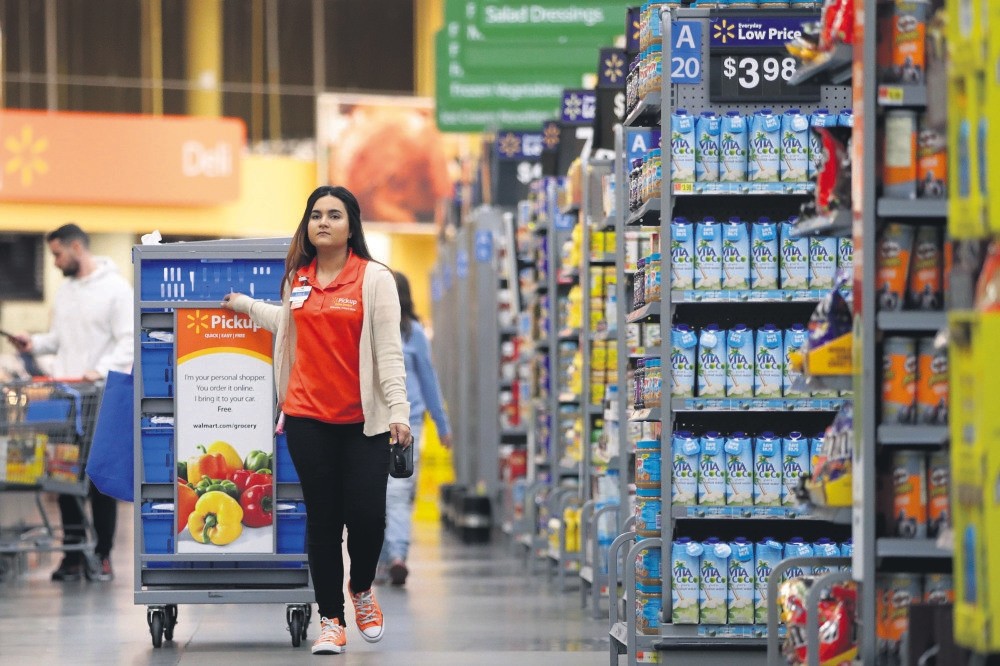 Laila Ummelaila, a personal shopper at Walmart in Old Bridge, N.J., pulls a cart with bins as she shops for online shoppers. Personal shoppers collect items for online orders and greet customers at a pickup location in the parking lot.
by Associated Press Jan 09, 2018 12:00 am

The retail industry is being radically reshaped by technology and nobody has felt that disruption more than its workers. Now, they are trying to deliver the kind of customer service the internet cannot match

With new options and conveniences, there's never been a better time for shoppers. As for workers ... well, not always. The retail industry is being radically reshaped by technology, and nobody feels that disruption more starkly than 16 million American shelf stockers, salespeople, cashiers and others. The shifts are driven, like much in retail, by the Amazon effect -the explosion of online shopping and the related changes in consumer behavior and preferences. As mundane tasks like checkout and inventory are automated, employees are trying to deliver the kind of customer service the internet can't match. So a Best Buy employee who used to sell electronics in the store is dispatched to customers' homes to help them choose just the right products. A Walmart worker dashes in and out of the grocery aisles, hand-picks products for online shoppers and brings them to people's cars.

Yet even as responsibilities change -and in many cases, expand -the average growth in pay for retail workers isn't keeping pace with the rest of the economy. Some companies say that in the long run the transformation could mean fewer retail workers, though they may be better paid. But while some workers feel more satisfied, others find their jobs are just a lot less fun. Bloomingdale's saleswoman Brenda Moses remembers the pre-internet era, when the upscale store was regularly filled with customers ready to buy. These days, department stores are less crowded and the customers who do come in can make price comparisons on their phones at the same time as they pepper staff with questions.

"You tell them everything, and then they look at you and say, 'You know what? I think I will get it online,'" she said. Moses has seen her commission rate rise to 6 percent from a half a percent, but her hourly wage dropped from $19 as low as $10 before it came back up to $14. Depending more on commissions means her income fluctuates, and she's competing with her colleagues for each sale.

"Now," Moses said, "you have to fight to make your money."

The same could be said for the retailing industry, overall. In 2017, 66,500 U.S. retail jobs disappeared (not taking into account jobs added in areas like distribution and call centers). In the past decade, about one out of every seven jobs have vanished in the hardest-hit sectors like clothing and consumer electronics, says Frank Badillo, director of research at MacroSavvy LLC. Though department stores have suffered the most, smaller businesses also have struggled to compete with online sellers.

Many of the survivors are rushing to adapt. Of the retail jobs that remain, over the next decade as many as 60 percent will either be new kinds of roles or will involve revised duties, says Craig Rowley, senior client partner at Korn Ferry Hay Group, a human resources advisory firm. He estimates the number is about 10 percent now. How fast retail jobs will change and what they'll look like depends on three factors, Rowley said: the pace at which online shopping advances; the speed at which robotics and other technology progress; and shifts in the minimum hourly pay.

"Jobs for workers will get more interesting and be more impactful on the company's business," Rowley said. "But the negative side is that there will be fewer entry-level jobs and there will be more pressure to perform."

Some retail workers at the vanguard of the changes -like Laila Ummelaila, a personal grocery shopper at a Walmart in Old Bridge, New Jersey -speak glowingly of their new responsibilities. Ummelaila became a personal shopper after joining the company three years ago. To meet her store's goals, she must pick one item per 30 seconds. If she can't find something, she has to quickly get a substitute that's as good or better.

"You start to get to know the customers, you know what they like," she said, "how they like their meat ... and how long they keep milk in the fridge."

Best Buy, meanwhile, has begun a free service in key markets where salespeople will sit with customers in their own homes and make recommendations on setting up a home office to designing a home theater system. Best Buy said shoppers spend more with a home visit than they do at the stores. The project follows Amazon, which reportedly has been testing a program that sends employees to shoppers' houses for free "smart home" recommendations.