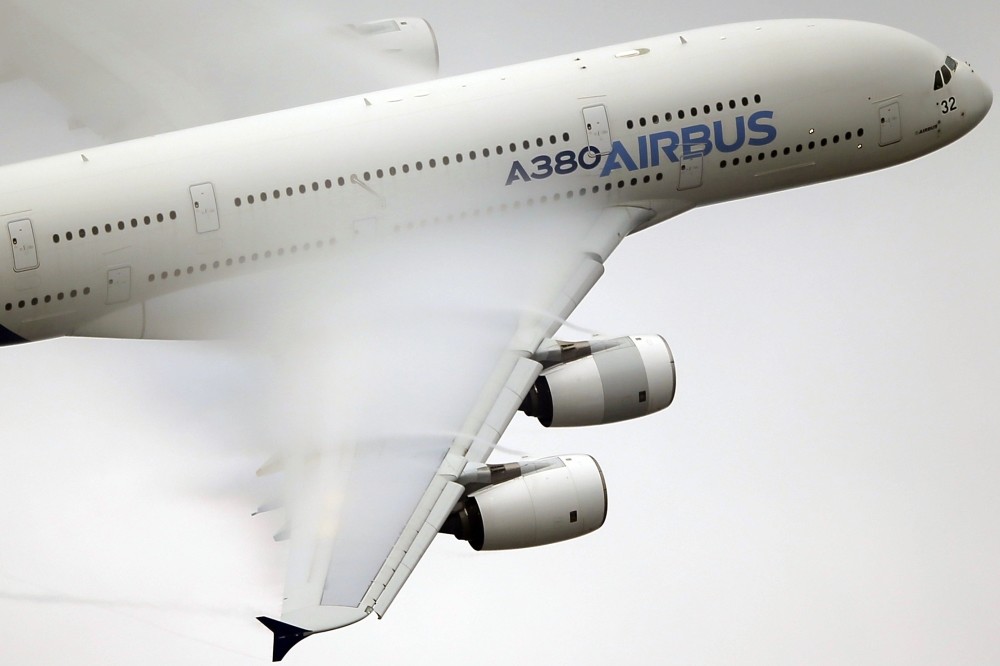 Vapor forms over the wings of an Airbus A380 as it performs a demonstration flight at Paris Air Show. Airbus says it will stop making its costly A380 superjumbo if it cannot strike a long-term deal with Emirates for a steady supply of the planes.
by Jan 16, 2018 12:00 am

The European aerospace giant overtook arch-rival Boeing in terms of aircraft orders last year, but warned that it could cease making its A380 jet if it does not receive any more orders for the supersize plane

Frenetic selling in the closing weeks of 2017 saw Airbus overhaul Boeing's recent lead in the global jet market to win their annual order contest for the fifth year running, but doubts remain over the future of its flagship A380. Airbus said it booked a total 1,109 aircraft orders and a record 718 deliveries in 2017. By comparison, US rival Boeing booked 912 orders and 763 deliveries. Chief operating officer Fabrice Bregier said that overall deliveries could rise to 800 this year, given the increased pace of production of its A320neo aircraft. The medium-haul A320neo and A321neo jets feature new generation engines that use 15 percent less fuel compared to their peers.

"We are going to double the number of A320neos" delivered this year, Bregier told a news conference. "If we do that, we will be close to 800 deliveries in 2018."

He acknowledged that deliveries of the A320neo had been slowed last year by problems with the engines made by U.S. firm Pratt & Withney and by CFM, the joint venture of General Electric and Safran. Nevertheless, the problems were gradually being resolved and around 30 aircraft were waiting for their engines, down from 60 at the beginning of the year, he said. Turning to the A380, sales director, John Leahy, warned that Airbus would have no choice but to halt the program if Dubai's Emirates airline - the main customer for the superjumbo launched in 2007 - did not place another order.

"We are still talking to Emirates, but honestly, they are probably the only one to have the ability right now on the market place to take a minimum of six per year on a period of eight to 10 years," Leahy said.

"Quite honestly, if we can't work out a de

al with Emirates there is no choice but to shut down the program," Leahy said.

There have been a total of 317 orders for the A380, the world's largest passenger airliner, since its launch. Airbus had been hoping to secure another major order from Emirates, which took delivery of its 100th A380 in 2017, at the Dubai Air Show in November. But the airline finally picked 40 Boeing 787-10 jets instead.

COO Bregier said the "trajectory will be to go lower" in production of the A380.

"We will deliver 12 aircraft as planned in 2018," and the number could fall to six per year in subsequent years, Bregier said.

"The challenge will be to maintain at least this level in the years to come" before customers start placing replacement orders for the A380s they currently have in service, and "potential new markets" start opening up, he said. Turning to Airbus' overall performance last year, the planemaker insisted that commercial aircraft deliveries in 2017 "were up for the 15th year in a row, reaching a new company record."

"A new Airbus delivery record coupled with our fourth best order intake wraps up a remarkable year for us," Bregier insisted.