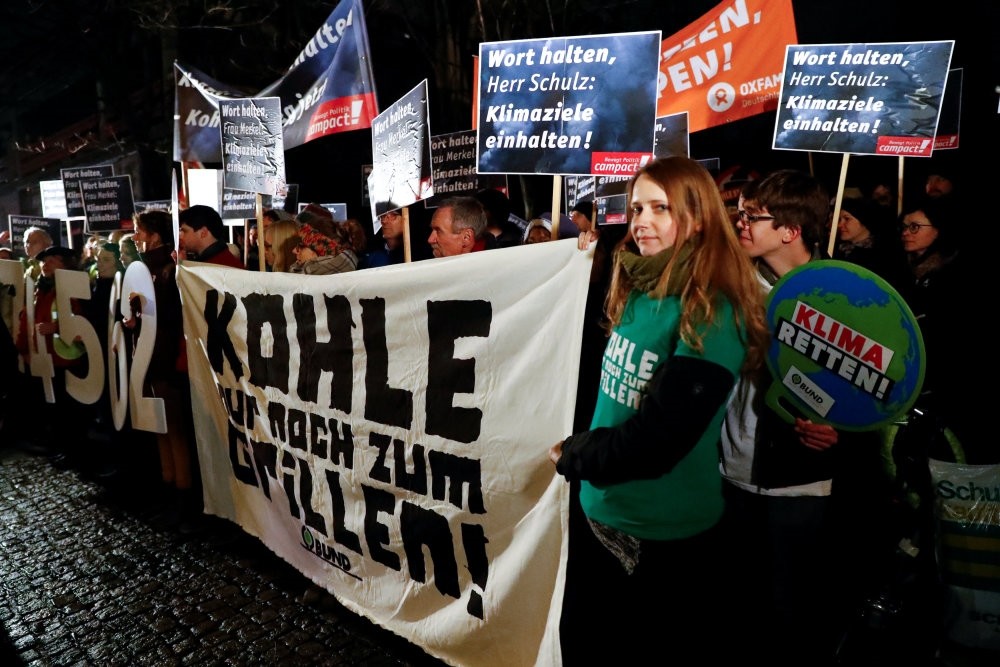 Campact environmental activists hold a banner that reads ,Coal just for barbecue, during a protest to support the German climate targets for 2020 in Berlin.
by French Press Agency - AFP
Jan 20, 2018 12:00 am

"German climate policy risks heading into a drastic gap between ends and means," BDI industry federation president Dieter Kempf said, calling for 1.5 trillion euros ($1.8 trillion) in investments by 2050 - or a little under half of German GDP in 2017. That sum would allow Germany to achieve an 80-percent reduction of greenhouse emissions compared with 1990, the lower end of Berlin's target range for mid-century, the BDI found in a study. Measures to reach the top end of the range - 95 percent emissions reduction - "would encounter serious limits to acceptance and implementation and could not realistically be achieved" with spending lower than 2.3 trillion euros, the federation said.

"It's right for the business federation to call for predictable planning in energy and climate policy," Greenpeace expert Andree Boehling said.

"The next government must present a clear plan for how a modern, clean Germany will manage step by step without coal, oil and eventually gas."

Calls to do more for the environment have multiplied as conservative Chancellor Angela Merkel pursues a coalition deal with the center-left Social Democrats. A bare-bones blueprint for talks agreed between the parties last week implicitly gave up on Germany's 2020 climate target of reducing emissions by 40 percent compared with 1990s. Differences over climate policy helped blow up Merkel's first attempt at forming a coalition following tricky September elections, with the ecologist Greens and pro-business Free Democrats.