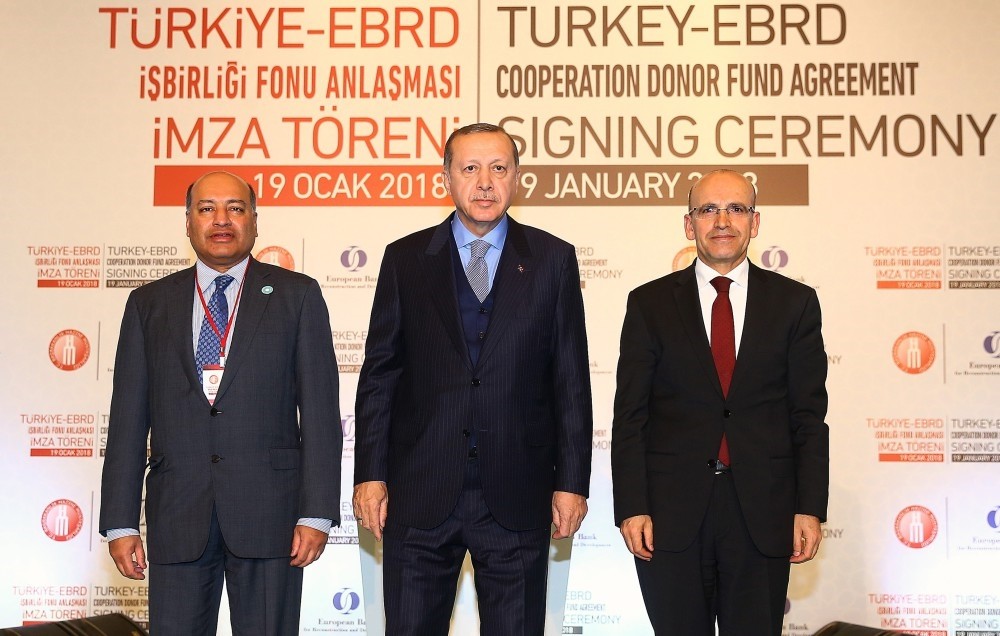 Turkey and the EBRD on Friday signed a cooperation agreement to establish a donor fund, which will, according to President Erdoğan, carry cooperation with the EBRD to a new level and further diversify their development assistance policy

Turkey and the European Bank for Reconstruction and Development (EBRD) on Friday signed an agreement to set up a 25 million-euro cooperation fund.

President Recep Tayyip Erdoğan speaking at signing ceremony, said Turkey will advance the ongoing strong cooperation with EBRD into a new phase with the agreement, which was signed by Deputy Prime Minister in Charge of Economy Mehmet Şimşek and EBRD President Suma Chakrabarti.

Erdoğan continued: "If we take it in proportion to national income, then Turkey is number one. It is not a common thing that we ranked in second place in humanitarian aid last year, after the U.S."

Indicating that they will further diversify their development assistance policy through the cooperation fund created, Erdoğan said that they continue to make development aid in sectors and countries they identified with the EBRD, which has 25 years of experience, and believed that the return of this investment would be highly productive.

Stressing that the EBRD, including Turkey as one of the founding members, has been an important partner in the highly important issue of development, mainly the private sector, since 2009, Erdoğan said the bank has provided a serious amount of funding to Turkey - around 10 billion euros to date.

Erdoğan said that Turkey is one of the countries receiving the largest amount of investment from EBRD over the past three years, indicating that beyond the amount of funding, the quality of the bank's investments in Turkey has been quite high.

He also said that they came together with Chakrabarti at the annual meeting, which was last hosted in 2013, indicating that relations with the bank have developed and strengthened in the meantime.

Erdoğan said that Turkey's investments have been performing highly successfully in terms of the development objectives of the EBRD. "This shows how efficient our relationship with the bank is for both sides. There are undoubtedly many elements behind the success story of the European Bank for Reconstruction and Development in Turkey," Erdoğan said. "Our dynamic, development-friendly and productive private sector comes to the fore among these elements in addition to the business environment that our country offers." He also listed the effective cooperation between the EBRD and Turkey as another supportive element.

Noting that having the bank's Turkey strategy and the government's reform program on the same line has created a healthy, successful partnership ground for the two sides, Erdoğan said the partnership has also been strengthened by the presence of communication channels that are always kept open.

The dedicated and determined attitude shown by Turkey has contributed to this process, Erdoğan said, adding that they will carry the ongoing strong cooperation with EBRD into a new phase with the signed agreement.

Noting that he did not see the signing ceremony as just a step to establish the cooperation fund, Erdoğan said they were also witnessing the point reached by Turkey in the field of economy and finance at the same time.

"The Turkish economy is based on such solid foundations that it has revealed what kind of recovery period is taking place by achieving a growth of 11 percent in the third quarter. We can see now that Turkey will punctuate the year of 2017 with an overall growth rate of around 7 percent. We will maintain this growth without falling back by walking in a more determined way in 2018.

"Unfortunately, they are still spinning inside an ideological approach, saying Turkey fails to provide stability and confidence at this point. We will either teach them this or teach them [a lesson], because Turkey is not such a country," Erdoğan added, underlining that with its investments and production, Turkey is currently one of the exceptional countries in the world.

Erdoğan pointed out that the July 15 coup attempt, the upheavals in the region and the problems in the world financial system have not affected Turkey's economy, suggesting that 2018 will be much more different, as the economy led the way among the world's most growing economies in 2017 despite all the problems.

Erdoğan said that the EBRD is appreciated as an institution that has confidence in Turkey and analyzes Turkey's economic potential properly, wishing the agreement, which has crowned the strong cooperation between Turkey and the bank, to bring good fortunes for countries that will benefit from the bank and the fund.