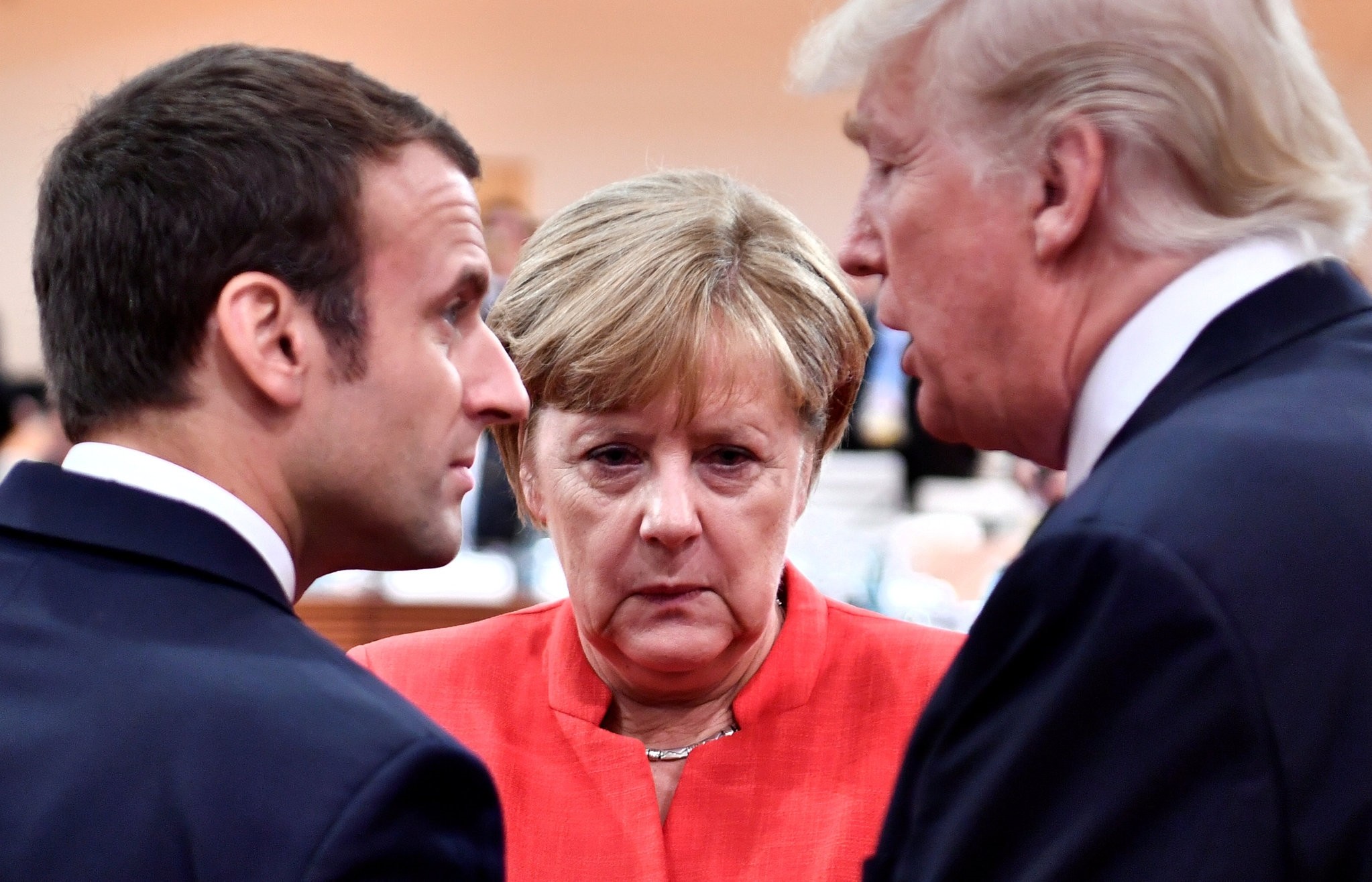 French President Emmanuel Macron, German Chancellor Angela Merkel and U.S. President Donald Trump confer at the start of the first working session of the G20 meeting in Hamburg, July 7, 2017.
by Jan 23, 2018 12:00 am

European leaders will be out in force at the World Economic Forum in Davos this week to defend multilateralism before U.S. President Donald Trump arrives to deliver his ‘America First' message

Politicians, business chiefs, bankers and celebrities will meet in the Swiss Alps under the banner "Creating a Shared Future in a Fractured World" for the four-day gathering against an unsettling global backdrop. A decade after the bankruptcy of U.S. investment bank Lehman Brothers helped trigger a global financial crisis, economic growth has returned and stock markets are hitting record highs. Yet there is a nagging fear among many in Davos that the brighter economic outlook could turn out to be little more than a mirage if the daunting array of geopolitical threats - from protectionism and climate change to cyber attacks and outright war - gather pace in 2018.

"Not all geopolitical threats are threats to financial markets," Axel Weber, the chairman of Swiss bank UBS and former president of the German Bundesbank told Reuters. "But I agree that there may be a disconnect, which has been going on for some time already and may well continue for some time."

The Global Risks Report published by the WEF last week showed that many see a heightened risk of political and economic confrontations between major powers this year.

Trump is a source of much of this anxiety after a volatile first year in office in which he has turned American foreign policy on its head. The leaders of Europe's biggest countries, absent from Davos last year and emboldened by their own economic recovery, will offer an alternative vision to Trump and Chinese President Xi Jinping, who the Europeans say has failed to deliver on his promise of a year ago to open China up to foreign investment.

The charge will be led by French President Emmanuel Macron, the new star of European politics, who in an audacious move, has invited many of the business leaders who will be in Davos to the Palace of Versailles yesterday to press them to invest in France. When he speaks in Davos on Wednesday, the former investment banker will offer his own "diagnosis" of globalisation and set out a vision for addressing widening inequalities, global warming and the rise of nationalism, his advisers say.

"I don't think Macron will be able to resist being the counter-Trump," said Robin Niblett, director of the Chatham House think tank in London. Macron will be joined by German Chancellor Angela Merkel, returning to the world stage after months of political limbo at home, and Italian Prime Minister Paolo Gentiloni. European Commission President Jean-Claude Juncker, back in Davos after a 20-year absence, is also due to speak.

This year's conference will include several sessions on sexual harassment, a nod to the #MeToo movement that erupted after allegations of sexual misconduct by Hollywood producer Harvey Weinstein. Criticised in past years for not representing women, the WEF appointed seven female co-chairs this year, including Christine Lagarde, the head of the International Monetary Fund (IMF) and Ginni Rometty, the CEO of IBM.

Among the other leaders attending are British Prime Minister Theresa May, Israel's Benjamin Netanyahu and several African leaders, including Zimbabwe's new president Emmerson Mnangagwa. Last year, the sole envoy from the Trump camp in the week leading up to his inauguration was Anthony Scaramucci, the New York financier who was sacked after just 10 days as White House communications director. For the first time in years, Iran will not be represented.