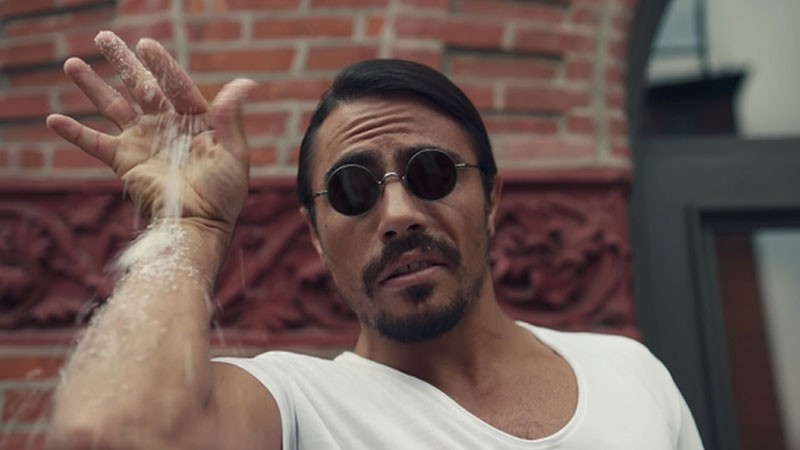 Last year, Turkish steakhouse owner and chef Nusret Gökçe created a phenomenon by sprinkling salt on steak dishes. The gesture crossed the globe, from Melbourne to the U.S., and was imitated by celebrities. Expanding with new branches, Nusr-Et, the brand name of Nusret's restaurants, recently opened a steakhouse in midtown Manhattan in New York City. However, recent rumors claim that the New York City's Health Department started an investigation into the "salt bae" chef on the grounds that he seasons meat with no gloves on, using his bare hands.

An article published in the NY Eater highlighted that the famous sunglasses-wearing meat connoisseur handles meat without wearing any gloves, while a report in Newsweek claimed that a spokesperson from New York's Health Department told the weekly that the department is carrying out an investigation regarding the complaint. The same spokesperson also reportedly told Newsweek that the city's health code bans touching already prepared food with bare hands, while another section prohibits wearing jewelry while preparing food.

The Manhattan branch of the famous Nusr-Et received some "salty" reviews from the NY Eater and GQ. According to the steakhouse's website, the restaurant has 13 locations worldwide, including New York, Miami, Dubai, Abu Dhabi and several in Turkey.

Meanwhile, another report in the Turkish daily Dünya stated that a European branch of Nusr-Et would open in London in July. The venue will reportedly be in one of the most luxurious hotels in the city, The Park Tower Knightsbridge. The hotel belongs to U.K.-based Emirati Mahri al-Tajir, who was once the London ambassador of the United Arab Emirates (UAE), whose wealth was reported to be 1.67 billion pounds.