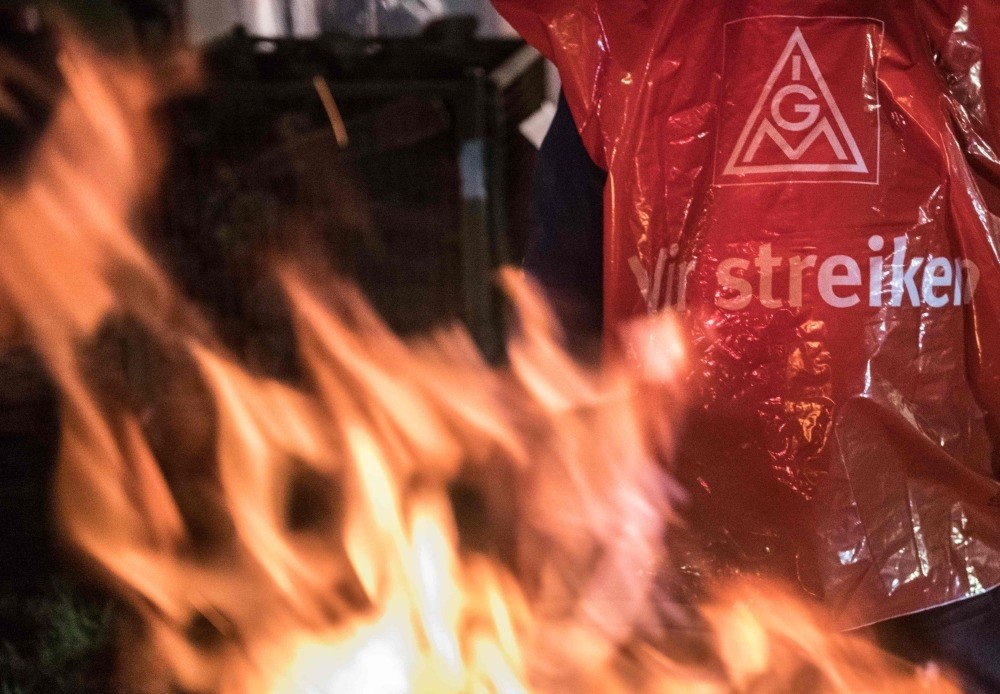 An employee of the Mercedes-Benz company wears a jacket of the metalworkers' and electrical industry union (IG Metall) with a slogan reading, ,We're on strike,, Berlin.
by Feb 07, 2018 12:00 am

Almost one million workers at Germany's powerful metalworking union IG Metall have won the right to a reduced working week in an agreement with employers late Monday, potentially staving off the threat of fresh strikes after a week of walkouts. IG Metall is negotiating on behalf of around 3.9 million workers in a critical sector for Europe's largest economy, pushing for higher pay and the right to temporarily switch to part-time hours. Around half a million workers drawn from sectors as varied as carmaking, electrical and electronic goods or metal production downed tools last week in 24-hour "warning strikes" as talks made little headway.

Union bosses threatened an indefinite strike if their demands were not met, something that has not occurred in the sector since 2003. But in an overnight statement, both the union and employers announced that they had reached a "tolerable compromise" with some "painful elements" in the key industrial state of Baden-Wuerttemberg. Some 900,000 workers are covered by the agreement, which could be extended to all of Germany. The state is home to industrial giants such as Mercedes-Benz maker Daimler and the world's biggest car parts supplier Bosch. A key concession is the right for more senior employees to cut their working week to 28 hours for a limited period of six to 24 months. The reduced working week comes with a commensurate salary despite union demands -- but employees are guaranteed their full-time position when they return.

The concession is a partial win for both sides. The union pushed for more flexible working conditions for employees during key life moments such as the birth of a child, looking after a relative or ill health. Employers were determined to avoid continue paying full-time salaries to those who choose a limited period of reduced working hours.

"For too long work time flexibility has been a privilege of employers," union chief Joerg Hoffman said. "From now on employees will have the right to opt for a reduced working week, for themselves, their health or their families," he added.

In a statement the employers federation said the deal would help staff "better balance work and private life" but added they were not willing to bow to the union's demand for financial compensation for those taking reduced hours. The two sides also both agreed to salary increases. The talks are under close scrutiny from other labour groups including civil servants whose contracts are up for renegotiation in the coming months.