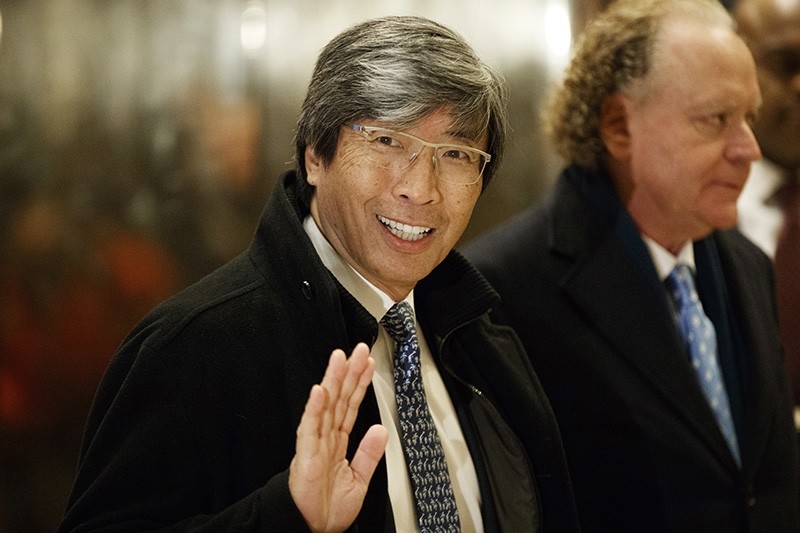 In this Jan. 10, 2017, file photo, pharmaceuticals billionaire Dr. Patrick Soon-Shiong waves as he arrives in the lobby of Trump Tower in New York for a meeting with President-elect Donald Trump. (AP Photo)
by Daily Sabah with AP Feb 07, 2018 12:00 am

The Los Angeles Times is being sold to a local billionaire for $500 million, ending its strained tenure under the owner of the Chicago Tribune.

Dr. Patrick Soon-Shiong is a major shareholder of Chicago's Tronc Inc., one of the richest men in Los Angeles and, according to Forbes, the nation's wealthiest doctor, with a net worth of $7.8 billion. He is now working on a cure for cancer.

The announcement Wednesday means that for the first time in 18 years the Times will be under local ownership.

Soon-Shiong takes over in a time of turmoil at the paper. The paper just replaced its top editor, the third switch at the top job in the newsroom in six months. Publisher Ross Levinsohn is on unpaid leave after revelations that he was a defendant in two sexual harassment lawsuits elsewhere. Journalists voted last month to unionize for the first time in the paper's 136-year history.

Tronc, the company formerly known as Tribune Publishing, owns 10 U.S. newspapers, including the Chicago Tribune, Baltimore Sun and New York Daily News, which are not part of the deal.

The sale keeps in line the trend of wealthy investors taking on newspapers as philanthropic endeavors.

Soon-Shiong's holdings include not only his Tronc stock but also a minority interest in the Los Angeles Lakers that he purchased in 2011 from Magic Johnson, the team's former superstar and current president of basketball operations.

In an interview with the Times last year, Soon-Shiong declined to say if he planned to buy the newspaper, although he acknowledged that as a major stockholder he was unhappy with the way it was being run and felt a need to ensure its survival.