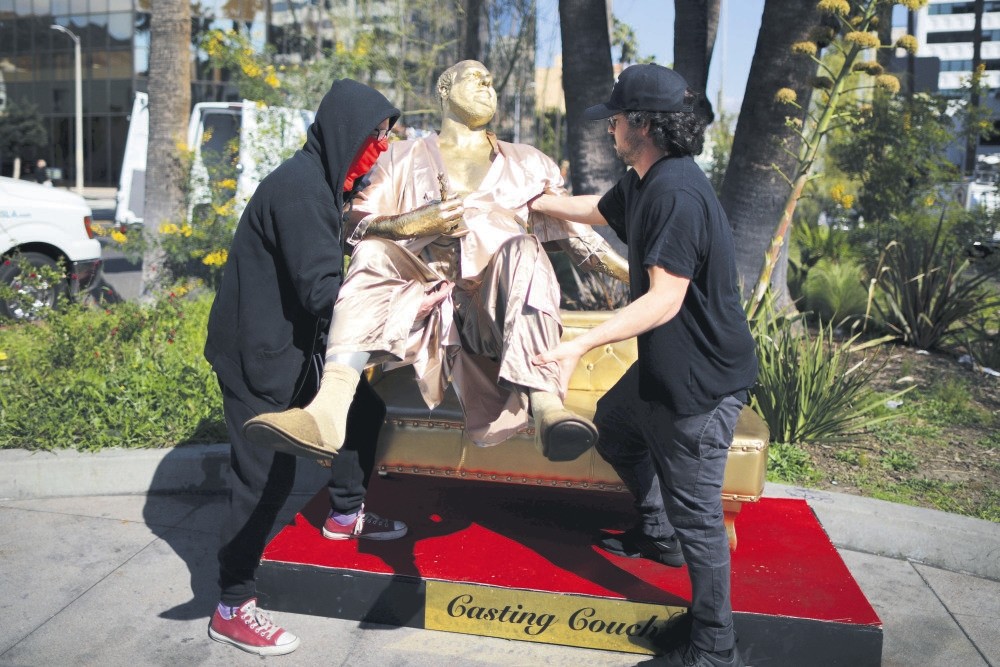 Artist Plastic Jesus (L) picks up his statue of Harvey Weinstein on a casting couch on Hollywood Boulevard near the Dolby Theatre during preparations for the Oscars in Hollywood, Los Angeles.
by French Press Agency - AFP Mar 03, 2018 12:00 am

The Weinstein Co. revived a deal to sell its assets to a group of investors who want to transform the film studio into a female-led entertainment venture following the downfall of Hollywood mogul Harvey Weinstein

A former official in the Barack Obama administration said Thursday she had reached a deal to buy assets from Harvey Weinstein's former company to launch a new firm after the Hollywood mogul's downfall for alleged sexual misconduct. Maria Contreras-Sweet said the deal had been reached with the New York state attorney general's office, which last month sued The Weinstein Company fearing that its imminent sale could leave his alleged victims without adequate redress. It was the latest dramatic twist in a long-running saga over the future of the New York-headquartered film studio, which has floundered on the brink of bankruptcy since Weinstein was hit by bombshell allegations, torpedoing his career last October.

Contreras-Sweet's statement came just days after the production house announced it would file for bankruptcy, accusing the investor group led by the former head of the Small Business Administration under Obama of coming up short on making a deal.

"Our team is pleased to announce that we have taken an important step and have reached an agreement to purchase assets from The Weinstein Company in order to launch a new company," Contreras-Sweet said in a statement.

Contreras-Sweet said her intention was to "build a movie studio led by a board of directors made up of a majority of independent women, save about 150 jobs, protect the small businesses who are owed money and create a victims' compensation fund."

The Weinstein Company had previously been close to sealing a deal with the Contreras-Sweet group last month when New York's Attorney General Eric Schneiderman launched last-minute legal action and imposed various principles on any sale going forward. Contreras-Sweet offered no details about the deal. Her investor group's bid for the Company had previously been reported at $500 million. She said the new company would have a new board, represent "the best practices in corporate governance and transparency" and amounted to "the best possible pathway to support victims and protect employees."

Weinstein was sacked as company chairman in October after a number of women, including top Hollywood actresses, accused him of years of sexual harassment, assault and even rape. More than 100 women have since accused him of impropriety going back some four decades, leading not only to his career annihilation but to a U.S. reckoning over harassment and abuse that has toppled a litany of powerful men in various sectors. New York state Attorney General Eric Schneiderman stipulated last month that any deal should provide adequate compensation for victims, protect employees and remove executives who had been complicit in Weinstein's misconduct. Contreras-Sweet, who said she had been inspired by the #MeToo sexual harassment watershed in her bid to turn the company around and have it led by women, at the time responded by saying "regrettably, it appears that this transaction has now ended."

The fate of several finished movies, which have languished on the shelf since the scandal blew up, with no release dates announced, remain unclear under any new deal. They include the historical drama "The Current War," starring Benedict Cumberbatch as Thomas Edison, "Mary Magdalene," a religious drama starring Rooney Mara, and "The War With Grandpa," a comedy starring Robert De Niro.