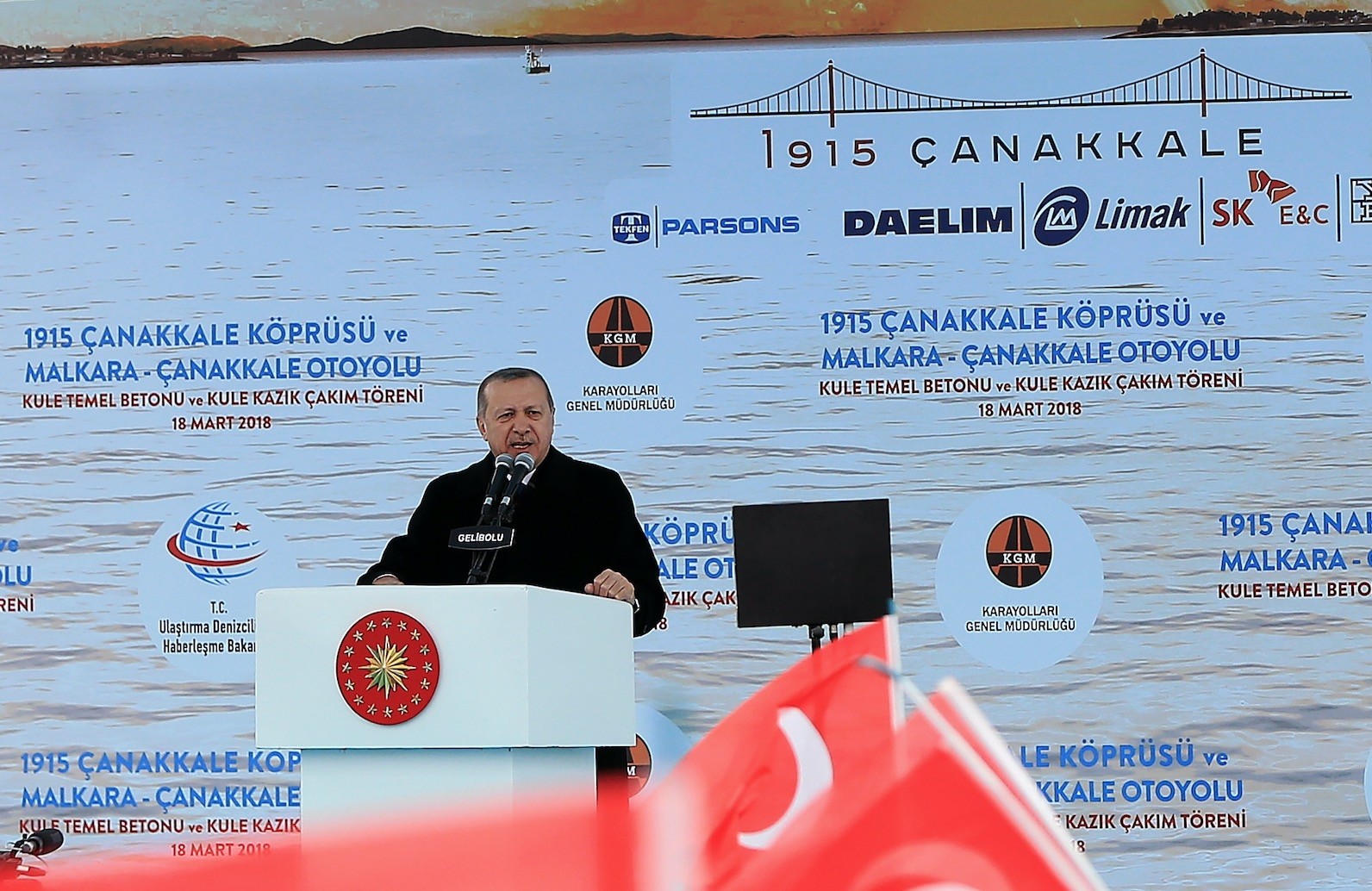 Another megaproject, Çanakkale 1915 Bridge, which will connect Turkish gulfs and straits for the seventh time and assume the title of the world's longest suspension bridge, will be operational in 2022, President Erdoğan announced Sunday

Turkey is set to accomplish another mega-scale infrastructure project, the Çanakkale 1915 Bridge, that will connect Asia and Europe for the sixth time. Last year on March 18, the ground laying ceremony of the bridge was held with President Recep Tayyip Erdoğan and Prime Minister Binali Yıldırım in attendance. Yesterday, exactly one year after, and on the commemoration day of Turkey's Çanakkale Victory, another ceremony for the tower foundation laying and piling of the bridge was held with the president and the prime minister in attendance. With yesterday's ceremony, piling of the foot of the bridge on the Anatolian side officially started the construction of the Çanakkale 1915 Bridge's sea section.

The Çanakkale 1915 Bridge will connect Turkish gulfs and straits for the seventh time, subsequent to the 15 July Martyrs Bridge (former Bosporus Bridge), Fatih Sultan Mehmet Bridge, Yavuz Sultan Selim Bridge, Osmangazi Bridge, Marmaray Rail Tunnel and the Eurasia Tunnel, with the last four becoming operational over the course of five years. Normally, traveling between the European and Anatolian side of Çanakkale takes roughly 30 minutes via a ferry, and is sometimes canceled during stormy weather, aside from the long hours of waiting in the line during holiday seasons. Once operational, the bridge will reduce the travel time to four minutes and the project will also ensure the integration of the ports in the Marmara and Aegean regions to the all transportation systems.

Speaking at the ceremony in Çanakkale's Lapseki region on the Anatolian side of the city, President Erdoğan announced that the mega-scale project will be completed and ready for service on 18 March 1922, some 18 months earlier than the initial date in the contract. The president recalled that the contract of the project noted the date to be 2023, but the president said, the negotiations ended up with the resolve to complete project at an earlier date.

He further stated that Turkey continues to carry out mega projects like the Marmaray, Yavuz Sultan Selim and Osmangazi Bridges, the Eurasian Tunnel and Çanakkale 1915 Bridge.

Prime Minister Yıldırım highlighted Turkey's position in the world for carrying out mega-scale projects in his speech at the ceremony. "Over the last 10 years, the world has seen the accomplishment of 10 mega projects and Turkey has carried out six of these 10 projects," he said, referring to Istanbul New Airport, the Osmangazi and Yavuz Sultan Selim Bridges, the Eurasian Tunnel, the Marmaray, and Izmir-Istanbul Highway. He expressed that the Çanakkale 1915 Bridge will be added to the list of Turkey's mega projects.

Transport, Maritime Affairs and Communication Minister Ahmet Arslan said the piling works of the bridge will soon be completed. "I hope that in a short time we will be able to transport the caisson concrete blocks that we have produced here through piling, and thus we will start the manufacturing of the bridge," Arslan added. 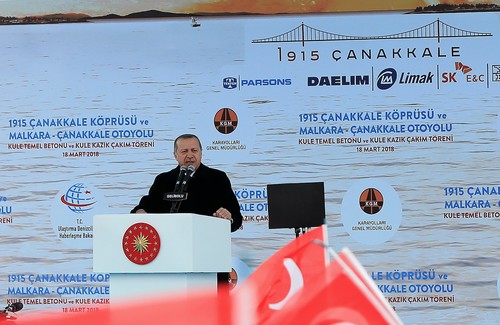 At the piling and tower ground-breaking ceremony, President Erdoğan announced that the Çanakkale 1915 Bridge will be operational on March 18, 2022, a year-and-a-half earlier than previously planned.

Noting that all tests, including those one the towers, have been completed, Arslan said the height of each tower is 318 meters, stressing that they will also break the record with the tower height of 333 meters. "We will make two separate bridges, different from many of the world's bridges, with 46 meters of platform width, and we will connect these two bridges with 9-meter connection inlets," Arslan continued, highlighting that the Çanakkale 1915 Bridge will be a first not only in size but also in technical features.

The Çanakkale 1915 Bridge has secured a 2.3 billion euro loan, 70 percent of which came from foreign financial institutions. The largest loans for the project, which have been contracted to Turkish and South Korean firms, came from South Korean export credit agencies.

The over two-kilometer-long Çanakkale 1915 Bridge is expected to be built within five-and-half years at a cost of around TL 10.35 billion ($2.8 billion).

The bridge will span 32 meters longer than the current record set by the Akashi-Kaikyo Bridge between Kobe and Awaji Island in Japan and will be the longest suspension bridge in the world with a 2,023-meter main span and 318-meter-high towers.

Defined as a global project, the bridge will consist of a six-lane divided highway and is expected to contribute immensely to the economy and social life in Çanakkale.