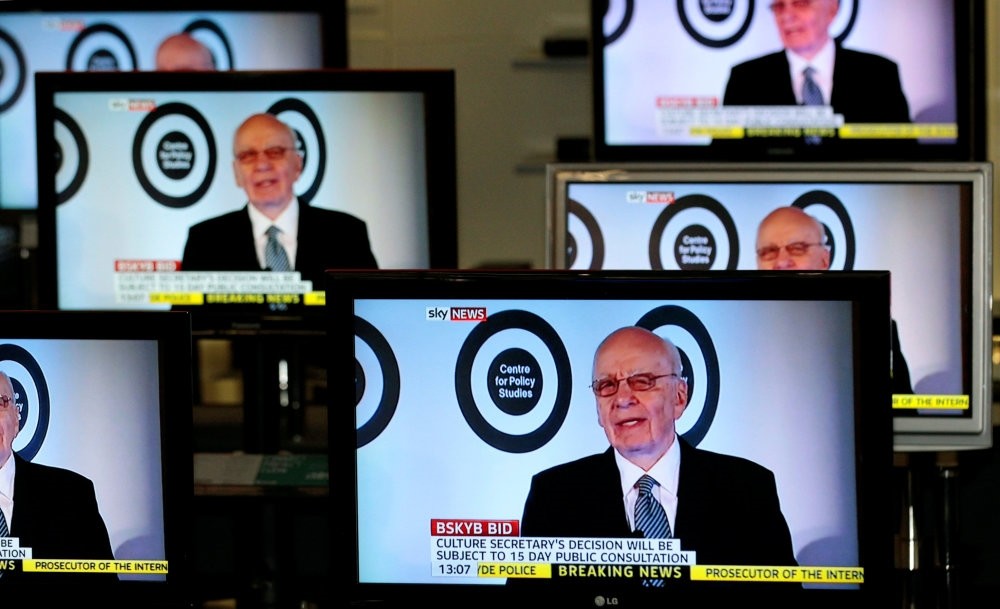 The current Executive Chairman of News Corporation and Executive Co-Chairman of Twenty-First Century Fox, Rupert Murdoch is seen talking on Sky News on television screens in an electrical store in Edinburgh.
by Apr 05, 2018 12:00 am

21st Century Fox has said it would sell off Sky News to Disney or ring-fence it to try to allay regulatory concerns over its proposed acquisition of Sky. Fox wants to buy the 61 percent of Sky

Rupert Murdoch's 21st Century Fox on Tuesday proposed selling rolling TV channel Sky News to Disney in order to finally seal control of pan-European satellite broadcaster Sky. Fox, which for a long time has sought to buy the 61 percent of British pay TV giant Sky that it does not already own, has also offered to ring-fence the 24-hour news channel instead, it said in a statement, as it looks to allay concerns over Murdoch's increasing media influence. Britain's Competition and Markets Authority (CMA) regulator provisionally ruled earlier this year that Murdoch's planned takeover was not in the public interest and that a deal would hand him too much power in swaying public opinion.

"We believe that the enhanced firewall remedies we proposed to safeguard the editorial independence of Sky News addressed comprehensively and constructively the CMA's provisional concerns," Fox said in a statement on Tuesday. New York-listed entertainment titan Fox has already bid 11.4 billion pounds ($16 billion) for the 61-percent of Sky it does not already own, but concerns linger in Britain over the strengthening influence of Australian-born U.S. tycoon Murdoch. At the same time, however, Disney announced last December that it would buy Fox for $52.4 billion.

Fox said on Tuesday that Disney would in any case purchase Sky News even if it did not buy Murdoch's group.

"21st Century Fox (21CF) proposed new ring-fencing remedies which would effect the legal separation between Sky News and the rest of Sky, establishing Sky News as a distinct company within the Sky Group, with its own fully independent board and under the management control of the head of Sky News," it said.

"Under this proposal, Sky News would operate entirely independently with guaranteed funding by 21CF for 15 years."

It added: "Alternatively, The Walt Disney Company has expressed an interest in acquiring Sky News, with a view to adding it to Disney's existing portfolio of television channels, whether or not Disney's proposed acquisition of 21CF proceeds."

The CMA had also said in January that its media plurality concerns would fall away on completion of Disney's Fox takeover. London-listed Sky said on Tuesday that both of the Fox proposals would "comprehensively address any plurality concerns."

The CMA, which published the Fox concessions in full on Tuesday, is conducting a review and will submit a final report to the British government on May 1. Britain's Culture Secretary Matt Hancock will then issue his verdict. Fox is meanwhile ramping up its Sky takeover efforts after U.S. cable giant Comcast offered more than 22 billion pounds for the entire group in February. The Fox bid, pitched at 10.75 pounds per Sky share, is significantly lower than the Comcast offer of 12.50 pounds.