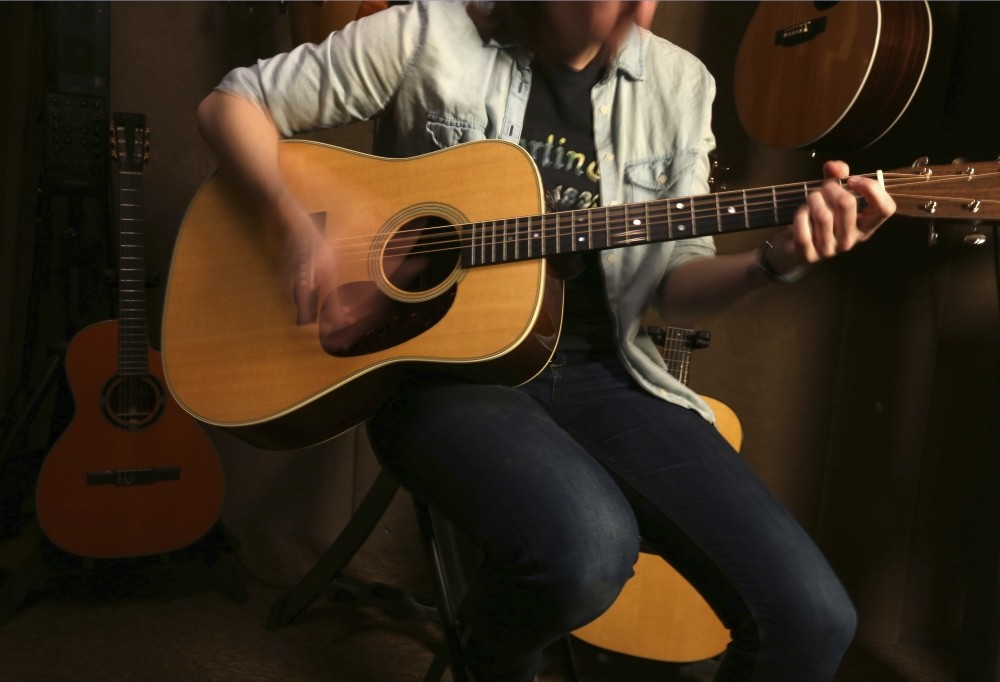 Employee Emily Meixell plays a guitar made with rosewood at C. F. Martin and Co., Pennsylvania.
by Associated Press Apr 13, 2018 12:00 am

An international crackdown on illegal logging in tropical forests has ensnared the makers of some guitars and other musical instruments, whose top-end products require small amounts of rosewood, a material prized for its rich, multicolored grain and resonant sound.

Since new trade rules took effect in 2017, guitar makers have complained about long delays in getting permits to import rosewood and export finished instruments that contain it. Warehouses have filled with unsold instruments, and a bagpipe maker in New Hampshire went so far as to ask the governor to intervene after a permit application was lost.

"I'm so annoyed. I'm so distraught by this," said Chris Martin, chairman and CEO of C.F. Martin and Co., which uses rosewood in 200 models of acoustic guitar, some played by Eric Clapton, Ed Sheeran, Sting and other stars. The company's logistics staff estimates it spends 40 percent of its time dealing with the new regulations.

Fearful that Africa and Asia were losing rosewood forests, governments adopted the rules to stem the flow of smuggled rosewood to China's luxury furniture manufacturers. But the restrictions have also hurt companies that use relatively tiny amounts of the wood in guitars, clarinets and oboes. Months after the regulations were adopted, acoustic guitar exports from the U.S. fell by about 28 percent, and electric guitar exports declined 23 percent, according to the Music Trades magazine, an industry publication. Music retailers reported losing $60 million.

At Martin's Pennsylvania-based company, many transactions are stalled: "We have orders for the guitars. We have customers. The customers have the money to pay for them, and we can't ship them because the paperwork is stuck somewhere," he said.

The guitar industry's frustration is focused on the United Nation's Convention on International Trade in Endangered Species of Wild Fauna and Flora, or CITES , which is responsible for combating wildlife smuggling. The agency has tangled in the past with instrument makers, mostly over restrictions on ivory, tortoiseshell and whale bone.

But the companies have no plans to abandon rosewood altogether. "There are other woods that work," Martin said. But guitar builders and players know there is "something very special" about rosewood's depth and richness of sound. "No one has found ... a wood that works better."