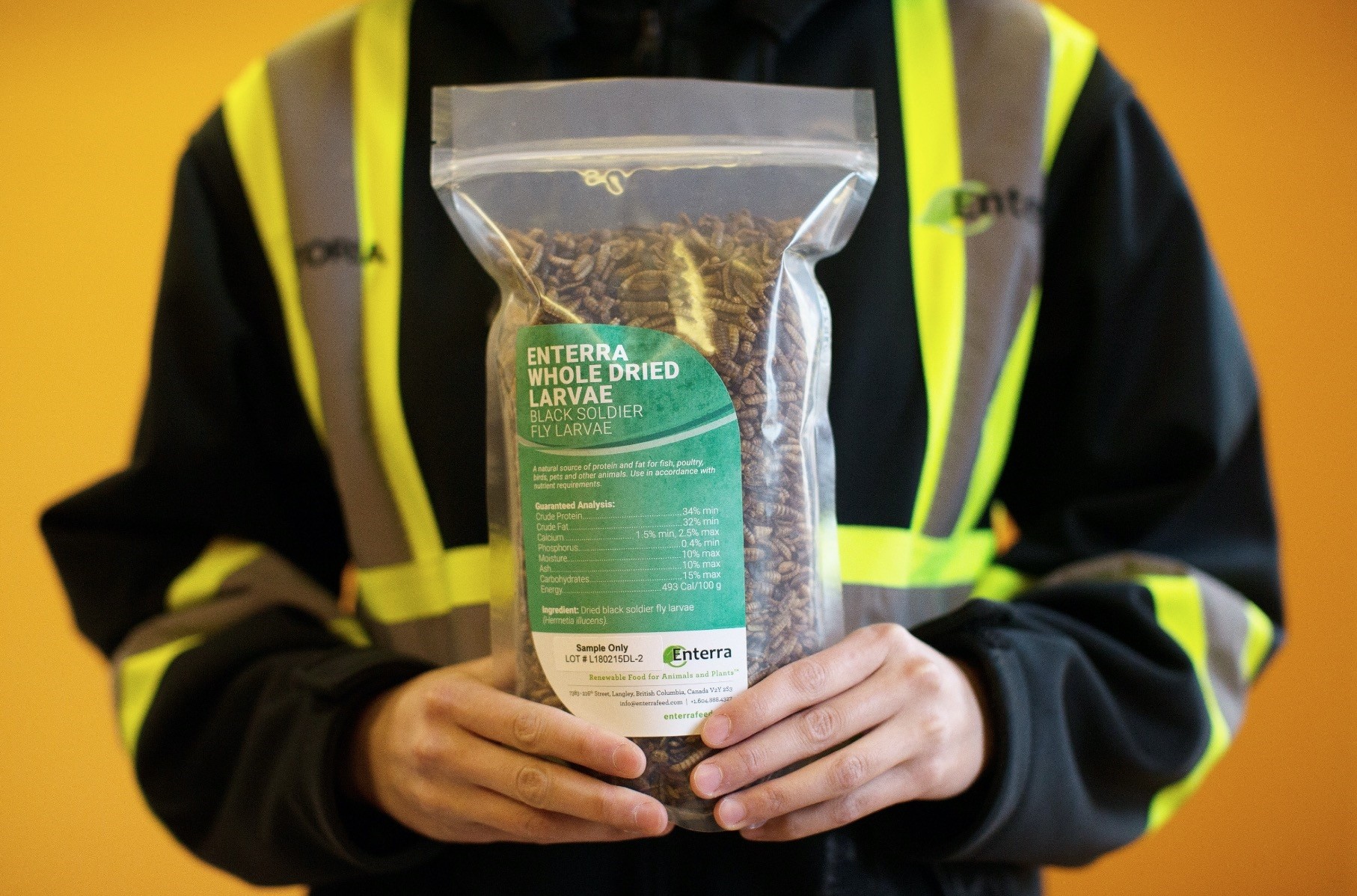 Black soldier fly larvae in its finished packaging is pictured at the Enterra Feed Corporation in Langley, British Columbia.
by Apr 16, 2018 12:00 am

The growing insect farming sector has captured attention and investments from some heavyweights in the $400 billion-a-year animal feed business. McDonald's is studying using insects for chicken feed

Layers of squirming black soldier fly larvae fill large aluminum bins stacked 10-high in a warehouse outside of Vancouver. They are feeding on stale bread, rotting mangoes, overripe cantaloupe and squishy zucchini. But this is no garbage dump. It's a farm. Enterra Feed, one of an emerging crop of insect growers, will process the bugs into protein-rich food for fish, poultry - even pets. After being fattened up, the fly larvae will be roasted, dried and bagged or pressed to extract oils, then milled into a brown powder that smells like roasted peanuts. The small but growing insect farming sector has captured attention and investments from some heavyweights in the $400 billion-a-year animal feed business, including U.S. agricultural powerhouse Cargill Inc, feed supplier and farm products and services company Wilbur-Ellis Co and Swiss-based Buhler Group, which makes crop processing machinery. Fast food giant McDonald's is studying using insects for chicken feed to reduce reliance on soy protein.

"This pioneering work is currently at the proof-of-concept stage," Nicola Robinson, McDonald's Corp sustainable supply chain manager, told Reuters. "We are encouraged by initial results and are committed to continuing to support further research."

The fact that such global food production giants are turning to insects illustrates the lengths they will go to find alternative sources of protein that are profitable and sustainable as animal feed or additives to human food. Bugs are just one many alternatives being studied or developed by major agricultural firms. Others include peas, canola, algae and bacterial proteins. Global population growth and an expanding middle class have raised per capita meat consumption by 50 percent over the past four decades, fueling fears of a protein pinch. Traditional sources of the key micronutrient are growing increasingly unreliable amid a changing global climate and worries about the environmental impacts of row-crop farms and commercial fishing.

"Sustainable protein is a key challenge, which is why Cargill is evaluating the viability of insects as part of the solution to nourish the world," Anquetil said. People tend to pivot from grain- and plant-based diets to meat-based meals as they grow wealthier. The problem is that as meat demand grows, feed production needs to grow faster. It typically takes about two pounds of feed to produce a pound of chicken. For pork, it takes four pounds.

Expanded cultivation of soybeans - the foundation of livestock and poultry rations for decades - is not a long term solution because it contributes to deforestation and overuse of harsh farm chemicals. In addition, supplies of fishmeal - an aquaculture feed made from wild-caught fish and fish by-products - have fluctuated wildly with climactic cycles, overfishing and regulation to prevent it. Nutritionists and scientists have long touted insect consumption for humans as a sustainable and cheap source of protein, but snacking on bugs is a stomach-churning prospect for people in many countries and cultures. Introducing insect protein further down the food chain may be more palatable. The bug business still has a few hurdles ahead - like the yuck factor, even when the insects are fed to animals. Regulators will also need to be convinced that ground-up bugs won't introduce new toxins into the food supply.

Insect farmers grow black soldier fly larvae and mealworms because they are docile, easy to grow and high in protein and digestible fat. Mealworms can be grown with little water and studies have shown they can "rescue" nutrients by consuming grains not fit for livestock production without passing on harmful toxins. Black soldier fly larvae also contain high levels of calcium and iron and can feed on a broad array of food waste. Black soldier fly larvae production has gained a handful of approvals in Europe, Canada and the United States, mostly for use in fish farms. Poultry, swine and pet food regulations are not as far along.